Chauncy Welliver, the “Hillyard Hammer,” is used to packing a punch. With an impressive heavyweight boxing career, he also owns and operates BoxFit in Spokane. But for once, he’s not the one packing the punch: It’s his 5-year-old daughter, Lemyn, who conceived the knockout idea for Lem’s Pops when she was just 4 years old.

A 4-year-old’s mind is full of limitless imagination, uninhibited by boundaries, budgets or other things that prevent grown-ups from pursuing their dreams. To turn any one of those dreams into a realistic plan, and to translate that into real-life work, is something else entirely, but, in this particular case, it produced a 5-year-old CEO.

About a year ago, Lemyn was at home thinking about how to spend her time. Instead of reaching for a Barbie or Nintendo, she got paper and drawing tools. She was thinking about what makes people happy – she knew ice cream made her happy, at least – and then it all became clear. She could start her own ice cream truck to spread happiness.

“The night I was thinking of it, I actually got a paper and drawed how I wanted the ice cream truck to look, and, when I was done, I really wanted to actually get an ice cream truck,” said Lemyn, dressed in her Lem’s Pops uniform of a white shirt, lemon-yellow-and-white-striped apron and 1950s-style diner cap.

She approached her parents with the idea. Now her mother, Sarah Welliver, is in a behind-the-scenes business management role for Lem’s Pops.

“It was fun to think about from a kid’s point-of-view, but, the more I thought about it, I was like, ‘There is no downside.’ She can learn business, she can hang out with her dad, she can meet lots of kids. What amazing, fun summer memories for her and kids and really Spokane.”

After Chauncy (“Pops”) saw how fast the wheels were turning in Lemyn’s head, and Sarah started researching how the idea could come to life, Sarah located a vehicle that was right-side steering and started in on paperwork. After months of sorting out the details of importing the truck from Japan and getting it through U.S. customs, Lem’s Pops could officially begin. 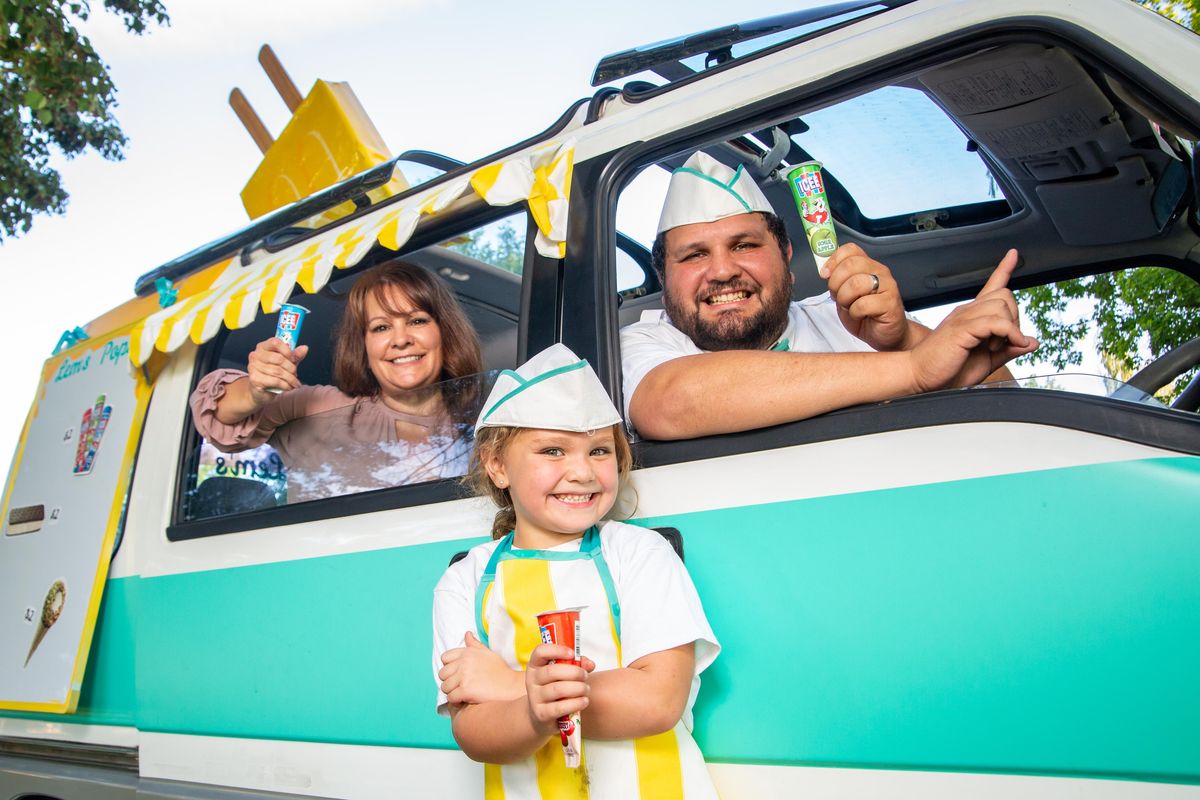 Sarah Grant Welliver, Lemyn Welliver, and Chauncy Welliver pose for a photo with their Lem’s Pops ice cream truck in Franklin Park on Sept. 3, 2019. The family got the business up and running last week: Chauncy is “Pop” and drives the truck, Lemyn serves the treats and makes creative decisions, and Sarah is the business manager who has the final say on all executive decisions. (Libby Kamrowski / The Spokesman-Review)

In the parking lot of Franklin Park, the imported 1993 Subaru Sambar doesn’t quite look like an American car, but what truly sets it apart is the Tiffany-blue vinyl wrap accented with – you guessed it – lemon yellow. Sarah handmade the giant yellow double ice pop that sits atop the truck.

Her other four children, Lemyn’s older siblings, helped to wrap the truck in the colors, as well as the back window, which features a cutout of Lemyn in her Lem’s Pops uniform and a quote that reads, “Don’t let your ice cream melt while counting someone’s else’s sprinkles.”

Holding true to Lemyn’s original inspirational spark, the official slogan of Lem’s Pops is, “We make people smile.” Since the Welliver family knows that it takes money to make money, many of the open-for-business hours have been free treat days to get the word out about Lem’s Pops.

The business does not have set routes or territory but frequents Franklin Park. Lemyn started kindergarten last Wednesday, and, paired with the impending fall season, Chauncy and Sarah predict that Lem’s Pops will be open for as many after-school days as possible until the weather gets too cold.

Sarah has coordinated plans to cater future events, including a summer-themed birthday party this December, so, even in the off-season, there are still opportunities for Lem’s Pops to avoid dormancy.

“I’m really proud of Sarah for following through: Lemyn thought of something, and Sarah gave it to her,” said Chauncy. “Making a kid’s dream a reality is beautiful, and I appreciate Sarah for that.”

Regardless of the limited remaining time of the season, it was a 90-degree day when a flock of children approached the second Chauncey turned on the truck’s music. While Lemyn and Sarah were busy, he had walked through the park and given a heads up to the families playing near the splash pad and playground, and the kids literally came running.

“I really like this idea,” said Dawn LaFountaine, who received free treats. “To me, it promotes children wanting to earn money. She’s courageous for doing this – I don’t know too many young people this young who would talk to people.”

Lemyn and Chauncey could hardly hand out the Icee brand ice pops fast enough, and both were sweating from heat and fast-paced service. Muzagan Timoori let her brother Ibrahim order a cherry ice pop before ordering a blue raspberry one that matched her outfit. Her eyes beamed, and she couldn’t hold back an eager smile while he bounced up and down at the window.

“It’s really good,” said Sania Sahedzada, who was looking after the Timoori siblings. “It keeps the community good. We are not from here, but (the Wellivers) don’t care that we’re from other countries, not America.” Sahedzada and the Timooris have been in the U.S. less than two years after emigrating from Afghanistan, and Muzagan said it was her first time getting free ice cream in the park.

Although summer is coming to an end, Lem’s Pops is as family as business can get and doesn’t plan to slow down soon. “Next summer, we’re going to hit the ground running,” Chauncy said.