A GRIP ON SPORTS • Where were we? Oh yes, NFL Sunday. The Seahawks are playing on the road. Against the Steelers. Better be ready for some big hits.

• And they better be ready for Ben Roethlisberger to have a big game. 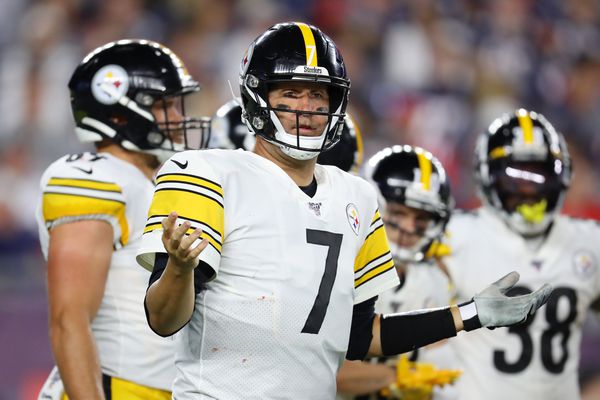 He was awful last week in a blowout loss at New England, which is what the Steelers do in Foxboro. But what Big Ben does is bounce back.

The Seattle Times’ Larry Stone pointed out this morning Roethlisberger is 26-3 in his career the week after not throwing a touchdown pass. That’s really good.

And with Roethlisberger at quarterback, the Steelers are 8-1 the week following a 20-plus-point defeat.

Both those things happened last week to Pittsburgh.

So what will happen this week to the Hawks?

They will win. Scratch that. They better win. If they are good enough to contend in the NFC West, they need to be good enough to handle a lesser-than-usual Steeler team.

This could be one of those telling weeks early in the NFL season. The Hawks are on the road at Pittsburgh. The 49ers, trying to show they belong, are at the Bengals. And the Rams, the class of the division, host the Saints in somewhat of a rematch of last year’s controversial NFC title game.

By this time tomorrow we should have a better idea of what’s ahead.

• When Eastern Washington’s football team has been really good the past decade (and by “really good,” I mean national-title worthy), its defense has made the difference.

By that we mean there is a constant in Cheney. The offense is going to score points. Usually, lots of them. When the defense is able to force turnovers, make big plays, get the heck off the field, the Eagles fly higher. Pretty simple.

Many years, though, that hasn’t been the case. The offense is championship caliber, the defense isn’t.

Such wasn’t the case yesterday in a big showdown in Alabama. The Eagles, ranked third nationally going in, built a 17-point lead heading into the final quarter, only to see it melt away in the heat and humidity.

The Eastern offense totaled 12 yards – that’s yards, not points – in the fourth quarter, a number that boggles the mind considering EWU’s usual offensive prowess. Even a stouter defense than the Eagles possess would have struggled to keep a lead considering how long it had to be on the field the final quarter. Yes, it gave up a game-winning drive as time wound down. But don’t put the loss completely on the shoulders of the defenders. A little ball control, a little rest, all of it would helped mightily the final minutes of the game.

WSU: Of course we have to look back at Friday night’s win. It was a big deal. Theo Lawson has his weekly rewind. … Elsewhere in the Pac-12, it was not the worst day for the conference, but it certainly wasn’t the best. Let’s start with the good. … Washington won at home against Hawaii, with only a poor third quarter marring a nice evening. … Oregon won at home against Montana, with only a whole bunch of injuries marring a dominant win. … Oregon State won at home against Cal Poly, with injuries also marring the Beavers’ easy victory. … Utah had no trouble with Idaho State, and it shouldn’t have had. … California scored enough to hold off North Texas State and start the season 3-0. … Arizona State picked up the conference’s biggest win, though the uncalled penalty on Michigan State’s final field goal attempt was all the national shows were talking about. … Arizona dominated on defense and on the ground for a strong non-conference home victory over Texas Tech. … OK, on the negative side, Stanford was boat-raced by UCF and it wasn’t even close. … USC went to BYU and lost in overtime. Just when it looked as if the Trojans had turned around their season we find out Stanford isn’t all that good and neither is USC. … UCLA isn’t either, though Oklahoma will make a lot of teams look bad. Chip Kelly looks despondent. … Colorado did that to itself this week against Air Force, struggling to contain the Falcons’ triple-option offense.

EWU: Ryan Collingwood made the long trip to land of Nick Saban and has this game story and a notebook. The latter leads with Antoine Custer’s outstanding game. … Around the Big Sky, the best win for the conference yesterday may have been Southern Utah’s 45-38 home overtime win against winless Stephen F. Austin, just because the Lumberjacks are usually good. … Or Montana State winning 23-14 on the road at unranked Western Illinois. Yes, it was a tough day. … UC Davis handled overmatched Lehigh. … Northern Arizona hosted and defeated a Division II school. That’s it for wins. … Well, Sacramento State won a non-conference game against Northern Colorado 50-0. That’s good and bad. … Weber State played Nevada tough but lost. … Portland State hung tough but lost at Boise State. … The games against Pac-12 schools are covered in the WSU section above.

Idaho: The Vandals almost became one of Saturday’s handful of teams that were paid a guarantee by the home school and then pinned a loss on the hosts. But they came up just short in Laramie, losing 21-16.

Whitworth: The Pirates will be inducting a new class into the school’s Heritage Gallery.

Preps: Central Valley rallied at home to defeat visiting Garfield, 40-39. Dave Nichols was there to witness the comeback from a three-touchdown deficit.

Chiefs: The season begins Friday in Kamloops. Ethan McIndoe hopes to be cleared to play. Dan Thompson has a feature story on one of the Chiefs’ veterans.

Seahawks: There isn’t a lot of faith in the Hawks today. … Should Seattle make a run at a Miami safety that wants out? Sure. … It will be interesting to see who is healthy for this one.

Mariners: If this was Felix Hernandez’s Seattle swan song (it wasn’t because he should pitch again before the season is over), then it was a good one. Seven innings and only a defensive bobble - who would have thought? – costing him a clean sheet. The M’s went on to defeat the White Sox 2-1 on a walk-off home run.

• We are including one last link this morning. It is to my friend Paul Turner’s last column for The Spokesman-Review. We include it not only because of the relationship but also because Paul is one of the better writers to ever walk the S-R’s ever-shrinking rows of desks. Like most of us, Paul never won a Pulitzer. But every day he made us laugh. That’s a greater – and more important – talent at times. All I know is I’m going to miss Reading his musings in the morning, Or running into him at Rosauers. Both were special. I hope he’s ready for those Michigan winters. Thanks for everything Paul. And, by the way, the opening sentence of today’s column is a tribute to Paul, something I’ve done often in the past eight years. Until later …