A GRIP ON SPORTS • Wouldn’t it be nice to watch a local professional football team that doesn’t make you chew on your nails until the final whistle? That actually scored often and won games going away? Not going to happen this season for Seahawks fans. Still, the final result is at least smile inducing.

• It’s hard to argue with a 2-0 record. Unless that 2-0 record is built on a three-point margin of victory. Yep, a one-point win at home in the opener – against a Cincinnati team that was blown out by the 49ers 41-17 yesterday in Ohio – and then a two-point win yesterday in Pittsburgh – against a team that was blown out by New England in its opener – are both victories.

They are just pretty stressful. Heck, the Hawks had the ball Sunday up 12 with less than 6 minutes to play and still made it stressful. A fumble, Chris Carson’s third this season, deep in your territory will do that.

But Carson redeemed himself with a key fourth-down run as the clock ticked down and the Hawks’ offense, stagnant the first half, explosive the second, ran the clock out to ensure a 2-0 start.

The football gods have been kind as well, with the Bengals missing a couple of good offensive players in the first week and Hall of Fame quarterback Ben Roethlisberger exiting this one with an arm injury. (One has to wonder if Big Ben has a bad ligament in his elbow, the way he was shaking and grabbing it.)

Next week the Saints come to Seattle on the heels of a bad loss in Los Angeles, reportedly without their Hall of Fame quarterback, Drew Brees.

Brees injured his right thumb early in yesterday’s loss and didn’t finish up. Ian Rapoport is reporting he suffered a torn ligament, so don’t expect him to play in Seattle.

I’m guessing most Seahawks fans are thinking “what a shame” and then smiling just a hair. After all, 3-0 seems like a good way to start a season.

• Speaking of Los Angeles, the odds for Saturday’s college football games were posted in a few spots yesterday. The Cougars opened as a 19-point favorite over UCLA.

How many times has Washington State been an almost three-touchdown favorite over one of the Los Angeles schools? My memory doesn’t reach back all that far, but I have to guess it hasn’t been all that often. It’s just another touchstone in a series of them in the Mike Leach era. 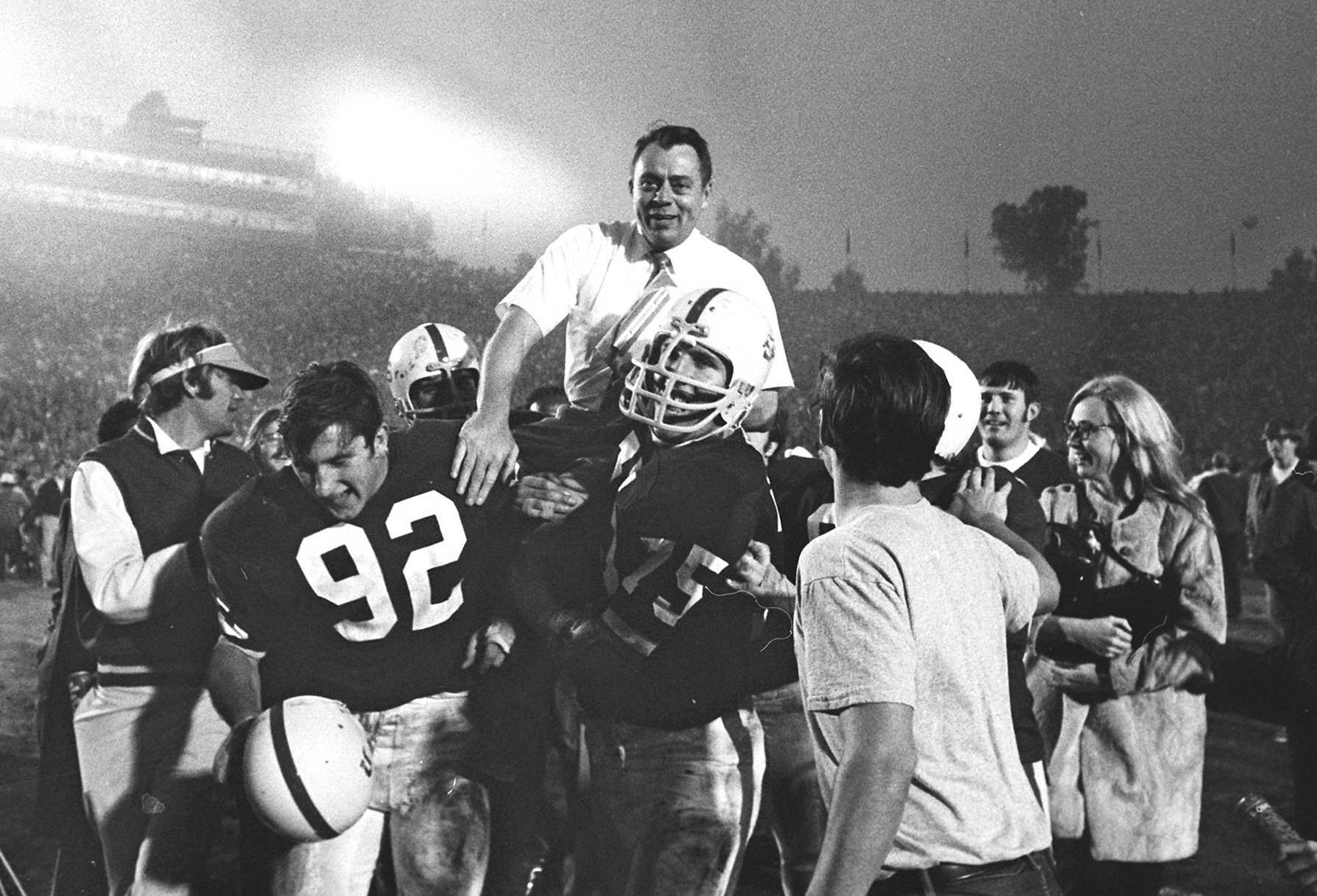 • I’ve related one of the touchstones of my youth many times in this column, the 1972 Rose Bowl in which Stanford upset Michigan. This then-high school student sat in the south end zone and watched Don Bunce lead the then-Indians’ offense, an offense that featured at-least yard-wide line splits. It seemed revolutionary to me. (It was.) The contrast with Michigan, a power team in which everyone was as bunched up as possible, was stark – as was the laid-back nature of Stanford’s coach.

John Ralston would leave The Farm after that game, becoming the Denver Broncos’ coach. His success at Stanford and Denver would be part of a Hall of Fame career in which he influenced coaches from Bill Walsh to Dick Vermeil.

Ralston died Saturday at age 92. We pass along his obituary.

WSU: Theo Lawson stuck around Houston an extra couple days to watch Gardner Minshew make his first start for the Jacksonville Jaguars. It ultimately was a defeat, though Minshew played about as well as Cougar fans would expect. … Sundays are poll days and Theo has how he voted as well as how the Cougars fared. They are up 19th in both polls. … Elsewhere in the Pac-12, it’s a day to look back on Saturday’s games, update the poll news and, occasionally, look forward to the weekend. … Washington may have found the red zone running back it needs. … Oregon is struggling on third and fourth down. And with injuries. … Oregon State’s defense has improved. … For the first time this season, Colorado has to bounce back. And do it in a conference game. … The Buffs travel to Arizona State on Saturday. The Sun Devils were the beneficiary of a missed call, one the conference acknowledged under its new policy. … Utah is a top 10 team. And yet still may be an underdog at USC. … There are grumblings about the Trojans’ play calling. They sure didn’t play like an Air Raid team against BYU. … UCLA hasn’t played like a Chip Kelly team yet this season. The Bruins are in Pullman on Saturday night. … Arizona has a bye this week, which may hurt the Wildcats’ momentum.

Seahawks: Pete Carroll turned 68 yesterday. (In unrelated news, a self-portrait in Carroll’s Seattle-area home shows a decrepit man of 168, hunched over using a walker). The Hawks gave him the best birthday present an NFL team can: A road win. … There were many heroes yesterday. … Rashaad Penny used technology to help be successful. … Will Dissly is the new favorite red zone target.

Mariners: Kyle Lewis is having a pretty decent start to his career. … Ichiro gave a great speech Saturday night.

Sounders: Seattle posted a 4-2 win over New York thanks to Jordan Morris and an own goal. … Some supporters walked out in protest of the MLS sign policy.

• One of the big plays in the Hawks’ win yesterday was a Carroll challenge of a non-pass interference call. The replay officials overruled the on-field officials and awarded the ball to the Seahawks some 38 yards downfield. Was it PI? It was close, so close it didn’t seem as if it would be called. Yet, I was confident. Why? Because after he threw the pass, Wilson was the victim of a flagrant helmet-to-helmet hit that was also uncalled. The replay officials had to be aware of the personal foul but under the rules can’t do anything about it. They could, however, penalize the defense for pass interference. And they did. Until later …