In 2019, for the first time since wolves naturally returned to Washington in 2008, the Confederated Tribes of the Colville Reservation did not formally survey wolves on its lands because it considers wolves recovered, according to WDFW’s report. Instead, it relied on incidental wolf sightings reported by hunters, trappers, the public and biologists in the field.

For that reason, the tribe’s reported number of 37 wolves is not comparable to previously reported estimates, WDFW’s report states, and is not included in the overall wolf population estimate.

The good news? Wolf populations continue to grow in Washington. The bad? Most wolves remain concentrated in northeast Washington, a geographic reality that, per the state’s rules, stymies the recovery process.

“I think we’re anxious to see more growth in the North Cascades and even getting our first wolf pack south of 1-90,” said Paula Sweeden, Conservation Northwest’s policy director. “That’s an important indicator for getting toward recovery.”

Where wolf packs are, or aren’t, matters a great deal. According to the state’s wolf recovery plan, wolves can be delisted after 15 successful breeding pairs are documented for three consecutive years, or after officials document 18 breeding pairs in one year.

Under either scenario, the pairs have to be distributed evenly throughout the state’s three wolf management areas.

Washington Department of Fish and Wildlife biologists documented a minimum of 108 wolves in 21 packs and 10 breeding pairs in 2019. That’s compared to 97 wolves in 22 packs and nine breeding pairs in 2018. Overall, the state’s wolf population grew 11%. The previous year, the population grew 3%. According to WDFW, two new wolf packs formed in 2019 – the Sullivan Creek pack in Okanogan County and the Kettle Pack in Northeast Washington. The Kettle Pack occupies former Old Profanity Territory Pack territory.

Despite that overall growth, no packs were documented south of I-90, although some individual wolves were discovered in the South Cascades. 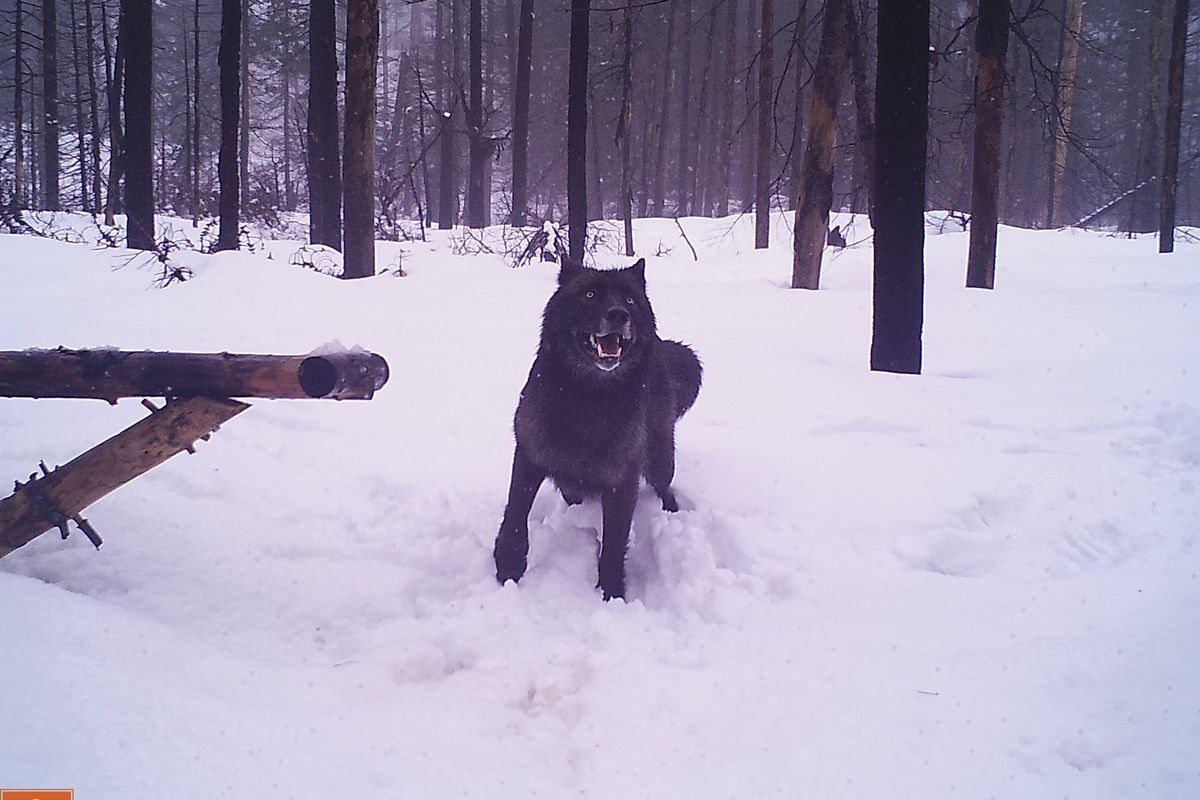 A wolf as seen near Steven Pass in February 2019. Conservation Northwest sets a number of remote camera stations to document wolverines between Stevens Pass and Leavenworth. They consistently documented wolves in this area going back to 2015, most are likely members of the Teanaway Pack. (Conservation Northwest / COURTESY)

For ranchers and environmentalists alike, reaching those recovery goals is an important milestone, Swedeen said. For ranchers, it means the wolves will no longer be a state-protected species, which gives the Washington Department of Fish and Wildlife more leeway in managing the wild canines.

For environmentalists, meeting recovery goals means a species once driven completely from Washington has returned and reestablished itself – a conservation victory.

Wolves are protected by state endangered species rules in the eastern third of the state, while they remain federally protected in the western two-thirds of the state.

All of which begs the question, why aren’t wolves dispersing into the South Cascades and filling in habitat in the North Cascades?

It’s a complex question, without one single answer, writes biologist Jay Shepherd, CNW’s wolf program lead in a blog published Tuesday. In the North Cascades, the lack of dispersal is likely due to a lack of prey combined with the rugged, mountainous terrain.

“It’s just not Yellowstone,” he said.

“While the river valleys west of the crest are home to the Nooksack and Skagit elk herds, as well as black-tailed deer, the combination of heavy human development and agriculture in the valley bottoms, combined with nearby ‘refuge’ habitat in the form of steep, heavily forested ridges, limits the available quality wolf habitat on the west side of the North Cascades,” Shepherd writes.

In 2018, for the first time, a pack was documented west of the Cascade Crest. During the 2019 survey, only one member of the Diobsud Creek pack was spotted, thus not meeting WDFW’s criteria.

“That the Diobsud Creek wolf established territory in a mix of national forest and industrial timberland east of Baker Lake and north of Highway 20 is no surprise,” Shepherd wrote. “The terrain here is notably less steep, of mixed vegetation, and generally more conducive for ungulates than the glacially carved, U-shaped valleys deeper in the North Cascades.”

As for the South Cascades, the reason wolves aren’t dispersing there probably has more to do with humans than ungulates. The habitat in the South Cascades is “excellent,” but it is largely sealed off from northern lands by roads, humans and agriculture. An additional factor, Shepherd writes, is that the South Cascades are relatively far from established wolf packs in northeast and southeast Washington.

“Areas of denser human populations and the associated structures, highways or buildings, may not be complete impediments, but could have a slowing effect on wolf recolonization,” he writes.

The final possible factor slowing the spread, Shepherd writes, is the hunting, poaching and state’s lethal removal of wolves in northeast Washington and Canada. If and to what extent that’s having on dispersal isn’t clear, he said.

“If there is a surplus in the wolf population and 1- to 3-year-old wolves need to disperse, but various forms of lethal removal are occurring, potentially removing curious or wandering younger wolves, then the removed wolves may have been recolonizing dispersers,” he writes.

The number of dead wolves concerned many, especially considering that 14 cattle were killed by wolves and 11 were injured, according to WDFW.

“It is imperative that we somehow standardize whatever it is we’re calling range riding,” Bachman said.

Donny Martorello, the wolf policy lead for WDFW, said he would like to see no wolf deaths. He said some deaths are unavoidable, however, as the wolf population continues to grow, noting that the more wolves on the landscape, the greater likelihood they get hit by a car or run afoul of livestock. He said the overall wolf population is trending in the right direction.

“If you’re thinking about the goal of the wolf plan to reach recovery objectives, we’re on a trajectory of, I think, success,” he said. “We keep moving closer to that.”

“I think it’s a thorough report and I appreciate that,” Bachman said. “I think there is a lot of good science in here, and then a lot of political narrative that I don’t care for.”