There are rarely traffic jams in the small Adams County farming town of Ritzville, but there was one Wednesday morning as people turned out in droves for 20 tons of free potatoes.

At times, the line of cars waiting for the drive-thru giveaway stretched as far as the eye could see. Volunteers hustled to bring 15-pound bags of potatoes to each car and truck, asking drivers how much they needed.

Some just wanted a bag or two. Others said they were picking up for family and neighbors and took several bags. A couple drove in from Kennewick to pick up bags for themselves, family and some of their neighbors. Another man drove in from Spokane with the same mission.

Some trucks and vans were loaded with dozens of bags destined for small town food banks. Perrie Robitaille asked for an entire pallet of potatoes to take to the town of Kahlotus and hand out to residents at the local post office. 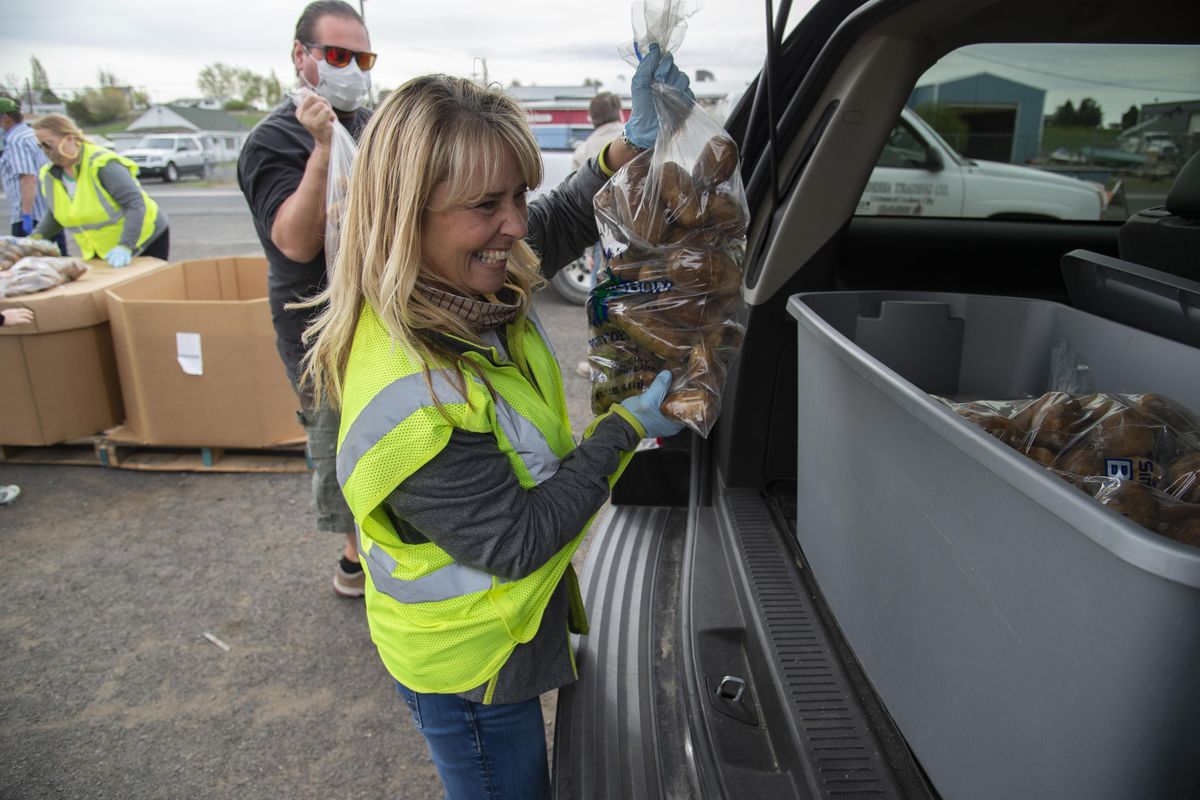 Angie Griffith, center, loads the back of Steve McDougall’s van as volunteers give away hundreds of 15-pound bags of potatoes to anyone who came by the lot in downtown Ritzville, Washington Wednesday, April 29, 2020. These potatoes represent a massive loss for Wollman, who grew them and needed to get rid of them after large contracts to buy them were cancelled and the were still taking up room in storage. (Jesse Tinsley / The Spokesman-Review)

Four MedStar vans came to pick up potatoes for local food banks. Driver Limetta Armstrong said her boss had the idea to send his drivers to deliver the food. She was picking up 40 bags for four food banks in Yakima.

Ritzville resident Laura Evans showed up looking for a bag for herself and a bag for her mother-in-law. She heard about the event on the Adams County Facebook page. Evans said she has several health conditions and hasn’t been able to do her grocery shopping.

“It’s been two months since I went grocery shopping,” she said. “It’s going to help a lot.”

She had plans to preserve the potatoes before they spoiled.

“I’m going to go home and make hash browns and freeze it so I don’t lose them,” she said.

The Rev. Cade Clark of the Church of the Nazarene in Harrington was helping hand out potatoes, but he brought a truck with him.

“I’ll be taking some back to Harrington,” he said. “We have a food bank there.”

The giveaway was organized by state Rep. Mary Dye, R-Pomeroy, who is a member of the Washington State Food Policy Forum. She said potato farmers in particular are in trouble because 90% of their crop goes to restaurants, and orders are down sharply.

The economic crisis caused by the coronavirus pandemic has slammed broadside against the Washington dairy and potato industries, with both facing the prospect of dumping product because markets have disappeared. | Read more

Some farmers didn’t plant a crop this spring, which means there may be a shortage if demand returns to normal later this year or early next year, Dye said.

But right now there’s a glut of potatoes, with three billion pounds in storage and no room for more. Dye said more potatoes will be given away in the next two to three weeks, including to food banks.

Potato farmer Marvin Wollman, who operates the Hutterian Farm near Warden, was there to watch the potatoes be handed out.

He found himself with tons of potatoes and no way to sell them.

“Restaurants are shutting down,” he said. “The processors shut down. The contracts were canceled.”

The potatoes originally were destined for the french fry market. But with no option to sell them, Wollman started considering what he could do.

“We can either dump them or donate them,” he said.

Donating them was an easy decision.

“There are people going hungry,” he said.

Potatoes have been one of Washington’s most lucrative crops, routinely valued as one of the top five agricultural commodities grown in the state.

In 2019, the state’s potato crop was supposed to be worth $845 million, according to the U.S. Department of Agriculture. That was before the pandemic cut demand.

The potatoes are mostly grown on more than 165,000 acres of irrigated crop circles in the Columbia basin. Those numbers make Washington the second leading potato producer behind Idaho.

Most of the approximately 10 billion pounds of potatoes grown in Washington are purchased by food companies to make french fries and other frozen products.

The future is uncertain for Wollman and his fellow potato farmers. Some didn’t plant a new crop, and those who have are considering plowing it under so they don’t waste money on growing a crop they may not be able to sell, he said.

Wollman already purchased his seed potatoes and planted some of them, but much less than he normally would. He said he’s uncertain whether his farm, which has been in the family for generations, will survive.

“The financial impact is huge,” he said. “The longer the economy is shut down, the worse it is. We are worried.”