A GRIP ON SPORTS • Years ago the S-R did a series of stories about the differences between Western and Eastern Washington. We called it “The Great Divide.” Little did anyone know, that term would be all the rage in 2020.

• “All the rage.” What a funny term. As a virus rages, college football (and, to a lesser extent in the national debates, high school football) serves as the canary in the coal mine. Will it survive or will it keel over and fall of its perch? 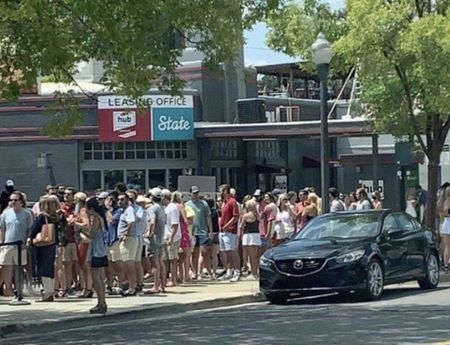 Don’t ask me. I’m not a psycho-historian. See, it’s not the doctors and communicable disease experts who are calling the shots on this one. It’s the public.

When it comes to football, public opinion is more an indicator if the games will go on in your area than health advice. What was it Mark Twain supposedly said? “Figures lie and liars figure?” Well, numbers can be used to bolster just about every argument, especially if you are willing to pick and choose.

Sometimes that is a good thing. If the M’s want to bolster their lineup with a player to set the table, they would probably prioritize someone with a high on-base percentage over someone who has a better slugging percentage. It just makes sense.

But when it comes to such things as a pandemic, maybe picking and choosing is not the best course. It does seem inevitable, however. Which brings us to our current divide.

This column by the Atlanta Journal-Constitution’s Mark Bradley delves into this phenomena as well as anyone has lately, though he doesn’t really come to a conclusion. However, these two paragraphs say a lot in a few words:

“In the wake of the Big Ten/Pac-12 exits, many have wondered how the other P5ers could view the same medical data and reach a different conclusion. As Dr. Catherine O’Neal, an LSU infectious disease specialist, told the Athletic: ‘I would say we have seen enough to develop a safe plan. They have not.’

As Tom Mars, a lawyer who has filed waivers for transfers … and worked with the NCAA on eligibility issues, told Dennis Dodd of CBS Sports: ‘Not to disparage Dr. Neal at all, but if she had opined it wasn’t safe to play college football this fall, I’m not sure she’d be representing the SEC much longer.’ ”

The more someone has invested in a subject, the more likely said person is to pick and choose facts and figures that support their point. It happens to all of us. Heck, if a cop pulls you over for rolling through a stop sign – yes, I know this is a fantasy in Spokane, but hear me out – you are going to emphasis the bush that obscures the sign more than the fact you’ve used that intersection for 20 years, right?

As long as college football programs – I’m thinking it’s no longer viable to refer to such entities in this context as schools – continue to want to play, they will find corroborating evidence to support that thesis. And vice-versa.

Take, for example, the news over the weekend concerning a low-cost saliva test for the virus. Game-changer, right? Well, certain aspects of the college football community certainly thought so. But others?

Jon Wilner of the San Jose Mercury News, spoke with Dr. Kim Harmon, a member of the Pac-12’s medical team and associate physician for Washington’s football program. She told him the new tests will be important for everyone – when they are available. They will be considerably less expensive. But, because they still need a lab to process results, no, they are not a game changer. Not for football. For football a test that can be done on Saturday morning with results before the game is crucial to limit spread.

Who is right? Maybe both. Maybe neither. It just depends on how you figure it.

• College is about development, and not only athletically for those who play sports. That point is sometimes missed when fans are debating whether it is the appropriate time for an athlete to leave school and turn professional. In Corey Kispert’s case, he’s reaping another benefit of staying at Gonzaga another year.

The National Association of Basketball Coaches is extending its influence under new director Craig Robinson, the former Oregon State coach whose sister, Michelle Obama, spoke at the Democratic National Convention yesterday. One way the organization will influence decision makers is through a newly formed Player Development Council.

Kispert will be a member of that first council.

“Being part of the PDC has the potential to be one of the biggest highlights of my college career,” Kispert told Jim Meehan. “We can’t wait to work to give players a stronger voice throughout all of basketball.”

Kispert is the only player on from west of the Rockies picked to the council.

The two highly ranked teams talked. They have agreed to play this season. At some point.

Will it happen? It probably depends on things – ie. the coronavirus – outside Mark Few and Scott Drew’s control. If the NCAA does what its been hinting at lately with declarations from the medical staff it’s not safe to play sports right now, then maybe not. (A decision is going to be made by mid-September.) Basketball season may not begin until after the first of the year. But even if that occurs, the NCAA may carve out time for nonconference games, pushing the championship tournament back until May. (Hey, May is a sweeps month. CBS and TNT might actually like that.) If there is a season and if there are nonconference games, this matchup will be one of the best.

WSU: Though the news isn’t all that positive, it’s sort of nice to have football player news that doesn’t concern testing or infections. Though yesterday’s announcement from Tay Martin that he is entering the transfer portal might just be connected to the Pac-12 pushing football season into the spring. Theo Lawson has more in this story. … There is also recruiting news, as Theo has all the information about a recent commit. … Around the Pac-12 and college sports, will players that sit out with coronavirus issues be granted another year of eligibility? It’s a big concern. … Oregon State still hasn’t had any positive tests recently. … Karl Dorrell is wondering how the schools still trying to play will impact Pac-12 football in the spring. … In basketball news, Colorado’s Evan Battey is on the same committee with Gonzaga’s Kispert. … Arizona’s overseas players are arriving in Tucson. … Former Wildcat assistant Book Richardson is talking, but not really about the recruiting scheme that got him sent to prison. … The battle between Under Armour and California is getting weird. … Finally, colleges have to stand ready to investigate complaints quickly.

Gonzaga: Jim delves into the Kispert news while also passing along the details of the new agreed-upon series with Baylor. … Przemek Karnowski is healthy and has signed a contract with a Polish team. Jim has more in this piece.

Whitworth: The Northwest Conference has pulled the plug on all sports, including basketball, until the first of the year.

Mariners: The Seager brothers met on the field for the first time – both hit home runs – as major league players, with younger brother Corey’s Dodgers who emerged victorious, 11-9 in Los Angeles on Monday night. … The trade deadline is about two weeks away, but don’t expect the M’s to be a big part of it. They don’t have a lot to offer. Though Taijuan Walker might be a pitcher to dangle. … Poor Kendall Graveman. He returned this year from arm trouble only to be knocked back by a tumor on his neck. The good news is it is benign and can be fixed with postseason surgery.

Seahawks: No, the Atlanta Falcons won’t have a home-field advantage when the Hawks open their season there. Atlanta announced yesterday there will not be any fans. … Jamal Adams might just be really good. … There is a key injury up front, but Pete Carroll is positive about his defensive line. Of course he is. … L.J. Collier is expected to have a role there this season.

• Not sure today is going to be filled with much more than finding ways to stay cool. The past two days of 100-degree weather in Spokane has sapped my energy – and warmed the house to such a degree the air conditioning is struggling to keep up. My thoughts and prayers are offered for any of you who don’t have the luxury of air conditioning. Been there. It’s hell this time of year. Until later …