After months of separation and party planning, sisters Sandy Marcelli and Cris Burkhart reunited with their father for his 100th birthday.

The party was not what they had planned. The pair’s father and mother, Tony and Marie Marcelli, remained 6 feet or more away at all times at the entrance of their Spokane Valley assisted living facility, while family members waved signs and sang “Happy Birthday” from the roundabout in the facility’s parking lot. Everyone wore a mask, and no one hugged as they normally would at a family gathering. 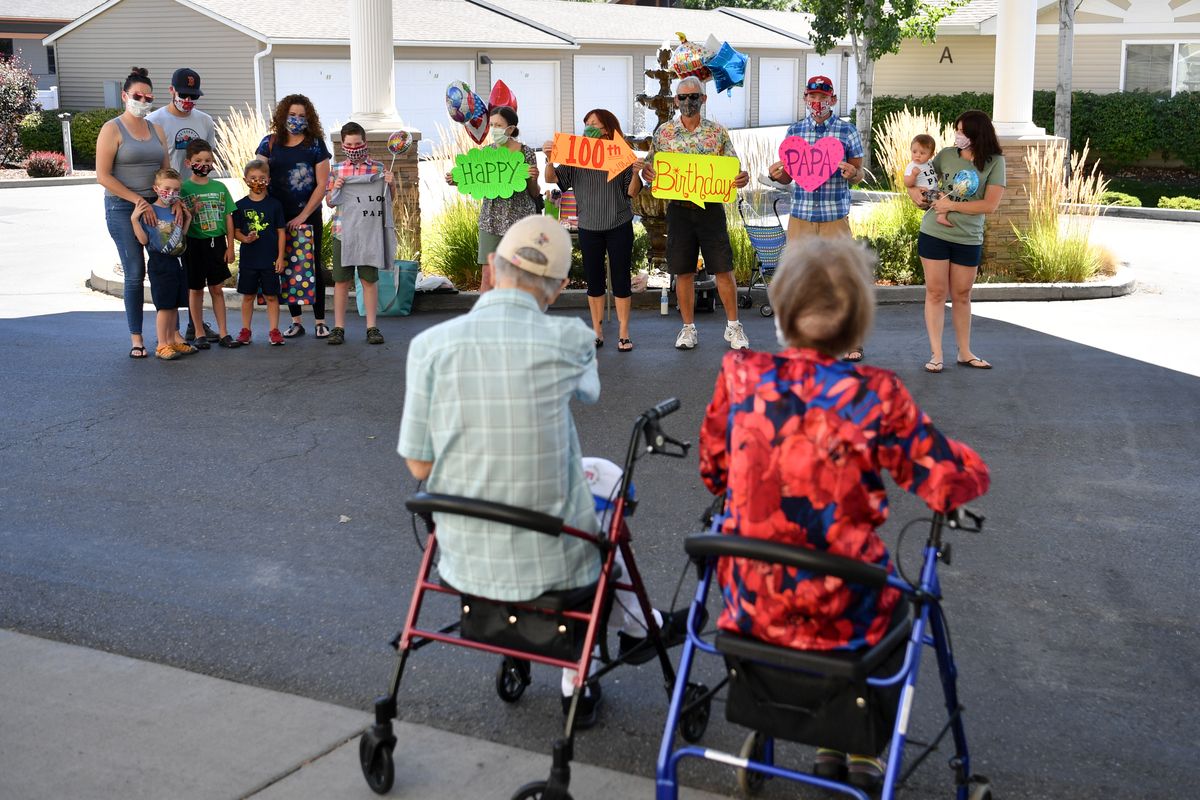 The Burkharts and Marcellis are among the many families who have been separated from older relatives for months as nursing homes, assisted living and other types of homes for vulnerable adults are closed to the public to prevent a COVID-19 outbreak in their at-risk population.

During the small birthday gathering, the family waved and sang to their parents and communicated through nursing staff, who shared their messages with her father, who is mostly deaf due to his military service in WWII.

Despite the challenges, Burkhart said she knows her father appreciated the gesture.

“It’s hard to tell, but I could see his eyes crinkle, like he was smiling under his mask,” she said.

After just a half-hour together, the family had to separate again to keep her parents out of the heat and out of concern for their health.

Burkhart said the family has only seen their parents through a window since March, and eventually had to stop that practice due to logistical issues at the Evergreen Fountains Senior Living Community in Spokane Valley.

Amy Burkhart said the family hasn’t been able to communicate with their grandfather over the phone due to his hearing issues. She said she is sometimes able to speak to her grandmother over the phone, but that can be challenging because she also is hard of hearing.

She said the birthday party was also a chance for her grandfather to see how much his newest great-grandson, Kaid, who is now 7 months old, has grown. The pair were able to wave to their grandparents and show the T-shirts she made for the occasion.

Cris Burkhart was also able to share the news with her father that he had been honored by the Spokane County Commissioners, who recently made a proclamation honoring his military service.

Tony Marcelli was a bombardier and a navigator for the U.S. Army Air Corps during WWII and eventually served in the U.S. Air Force Reserves after the branch was founded in 1947.

After leaving the service, he attained a bachelor’s degree at San Francisco State University and a master’s in accounting from Stanford University.

He went on to work as an accounting teacher and eventually was an accountant for Kaiser Aluminum in California, before he retired a second time.

Cris Burkhart said she had lived in the Spokane Valley area on and off since the 1980s, but moved her parents to the assisted living facility to be closer to the rest of the family last year.

She said before the pandemic, they were getting adjusted to the social scene at the facility, and the isolation has been difficult for them.

The family had planned to hold a large birthday party for him this year, because he was recovering from a fall last year and they weren’t able to throw the 99th birthday party they hoped for.

Cris Burkhart said a normal birthday party would have begun and ended with hugs to both her parents and said the physically distanced celebration was special and meaningful to the whole family, but still wasn’t the same.

“Hug whoever you can in your family right now” she said, “because it may be a long time before you can see them again.”