“It’s the best type of learning. You’re playing and learning at the same time,” said Spokane Parks Director Garrett Jones, before motioning to a climbing structure resembling a logjam, a sight that would have been common thousands of years ago when the great Missoula floods carved much of the Inland Northwest’s terrain. “When you’re playing on the logjam, well, why is that? There’s a story behind that.”

The play structure, designed to tell the story of the region’s geologic history with climbing walls, fossil play structures and splash water features, is just one element of the final stage of Riverfront Park’s $64 million, taxpayer-funded renovation in an area known as the North Bank. The work, slightly delayed by the postponed arrival of play equipment during the coronavirus pandemic, is now slated for completion in the spring. 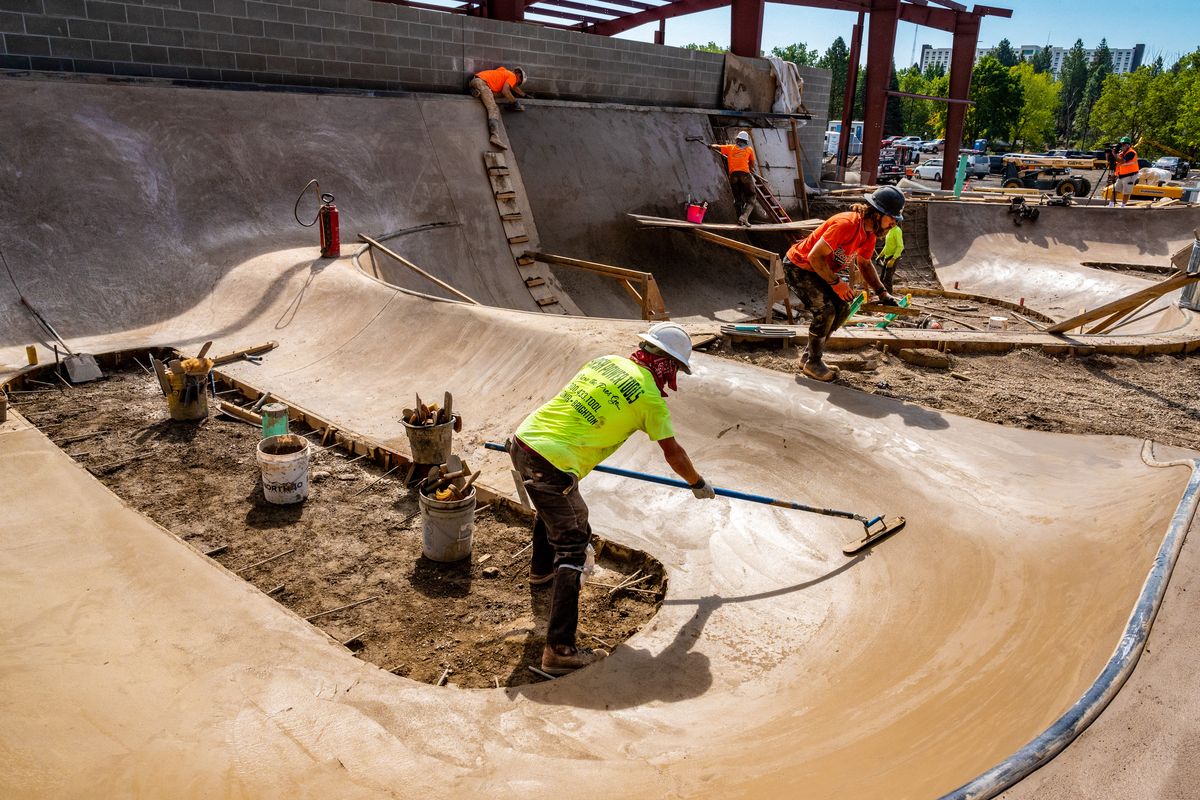 Workers build a new 8,500-square-foot wheels and skate park on the North Bank of Riverfront Park on Friday. It will feature two bowls, a hubba rail and ledges. The park is part of a $9.2 million regional playground that will be open to the public in spring. (Colin Mulvany/THE SPOKESMAN-REVIEW)

For Jones, who as a parks employee was helping draft technical designs for the redevelopment a decade ago, the work signals the biggest transformation in the six-year process of updating the former grounds of Expo ’74.

“I bet you there will be users that come to this area and say, ‘I didn’t know this was park property. I had no idea,’ ” Jones said.

Construction on the park renovation, envisioned with the adoption of a master plan in 2014 and approval of 68% of voters in the election that November to sell 20-year bonds to finance the work, began in the park’s southwestern edge and has crept north along Hamilton Street, with completion of the $8.1 million skating ribbon and adjacent Skyride facility, the $9 million Looff Carrousel building and surrounding grounds, and the nearly $25 million rebuilding of the U.S. Pavilion and surrounding grounds. The playground, along with the skate park and basketball court, is projected to cost a little more than $9 million altogether, about $2 million of which comes from sources other than the taxpayer bonds, including state grants and philanthropic gifts.

Just to the north of the site, the Spokane Public Facilities District’s Sportsplex is taking shape for a fall 2021 opening. A wheelchair-accessible switchback path, built using leftover rock from blasting to lay the foundation for the $53 million indoor prep sports facility, leads to the play area, which will feature netting similar to the play structure in Manito Park. It will be built upon an artificial turf and rubber foundation similar to the play structure in Kendall Yards, allowing for play with less chance of skinned knees or other injuries.

The playground’s storytelling begins to the east of the play structures, which also include a planned 30-foot tower with multiple tube slides. A climbing rock wall features carved fissures, where water will start to spurt at scheduled intervals to simulate the cracking of the glacial dams. Meanwhile, water will pool at the top of the faux rock structure, waiting to spill over.

“At the climax, this gush of water will fall and hit the kids, they’ll scream and run around,” Jones said.

Walking east, parkgoers will be greeted to the right by a large, paved area for basketball courts, where workers were pouring concrete Friday. To the left is an 8,500-square-foot skate park, intended as the promised replacement for the former Under-the-Freeway hangout demolished in 2015.

Park officials salvaged a rail that once stood in the former skate park to install in the new feature, which will sit next to a maintenance and operations building that also will house four family-accessible bathrooms. Members of Spokane’s skating community recently asked the Spokane Park Board to consider an all-weather covering for the park, a feature that may be installed later with private funding, Jones said. But the priority was to build as large of a skate-able area as possible with the available money.

“We worked with the user groups. We said, prioritywise, if we were able to scrounge up or identify additional funding, we want to make this happen because it’s a lot more efficient to do it all at once,” he said.

The basketball courts are being built with a $500,000 contribution from Hooptown USA, the citywide brand responsible for putting on the annual Hoopfest 3-on-3 basketball tournament, among other community initiatives. Funds also have been donated by the Jess Roskelley Foundation, and crews will install a climbing boulder near the skate park and basketball courts that will honor the late mountaineer and allow budding and professional climbers alike to test their skills.

“It’s meant to climb on, learn on,” Jones said. “We really wanted to celebrate Jess’s life.”

Scattered throughout the park will be faux fossilized remains, including a climbable mammoth, which Jones notes is the state fossil of Washington. But the design also incorporates relics from Riverfront Park’s past, including the renovation of an existing gazebo shade structure from Expo ’74 and the return of the untitled sculpture often called “the dinosaur bone,” which originally stood outside the covered U.S. Pavilion during the world’s fair and was removed from the park in 2014. The mammoth, and dinosaur bone, are awaiting installation as crews lay the foundations and pour concrete.

Completion of the final bonded project in Riverfront Park doesn’t mean investments in the signature downtown attraction will end, Jones said, and the work in Riverfront is intended to inform a new system master plan that will address the dozens of play spaces across the city. The milestone indicates that Spokane is still investing in its public spaces, even in the midst of a pandemic.