Night Without A Bed

What: Families can take the challenge and seek pledges for Family Promise of Spokane, sleeping in a car, backyard or on couches, while sharing on social media #NightWithoutABed.

Free: Sign up and take the pledge at www.familypromiseofspokane.org/nightwithoutabed

'Night Without a Bed'

Joe Ader plans to sleep in a car later this month with his wife and two sons. Their overnighter won’t be a camping trip with comforts on purpose.

Through social media, Ader also will unite with others bypassing a mattress on Aug. 29 for “Night Without a Bed,” a campaign that’s part awareness and part fundraiser to support families experiencing homelessness in this region.

As Family Promise of Spokane executive director, Ader knows the statistics: Spokane County this past academic year had 3,108 homeless children in kindergarten to 12th grade. Add in their relatives, and that number more than triples.

“Families are considered the hidden homeless,” Ader said. “When most people think of homelessness, they’re thinking of the single man underneath the bridge. They’re not thinking of little kids and families as being homeless. The reason why is it’s not safe to have children downtown and out on the street, so because they’re out of sight, they’re out of mind.

“There’s actually an incredibly large population each year of homeless children in our county.” 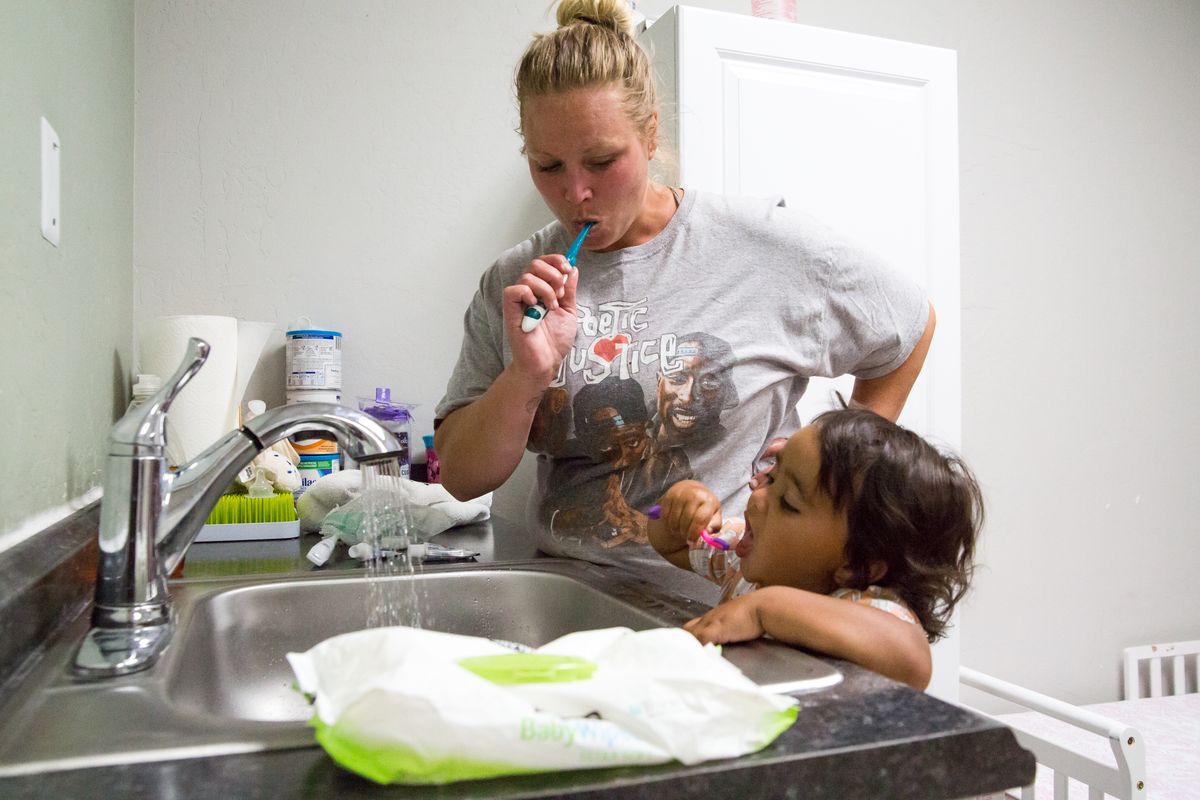 Dawn McKnight brushes her teeth with her daughter Bella McKnight, age 2, while the evening winds down before lights-out in the Family Promise of Spokane shelter on Aug. 11, 2020. The low-barrier emergency shelter has the capacity for 60 guests and accepts all family models, except for single adults, with the goal to “exit to permanent housing” driving its practices. Intake of new families includes a one-week quarantine due to COVID, but each family’s bed areas were already separated. (Libby Kamrowski/ THE SPOKESMAN-REVIEW)

The one-night event can offer a glimpse of what that might feel like, Ader said, with hopes to raise empathy and conversations about homelessness. At no cost, people can register with a pledge to sleep safely anywhere without a bed – in cars, tents, treehouses, backyards or on couches. They can use the hashtag #NightWithoutABed to post about their experience on social media and work as a team seeking donations to support homeless families.

“We hope for the families participating also to share their experiences and what they learned on social media, and to share with their friends,” Ader said. “We’re asking everybody to invite friends to participate either in the event or to provide support for their team. We’re asking our church partners to have their church members participate.”

Family Promise is a community-based program to end the cycle of family homelessness while partnering with many faith-based organizations. A rotational shelter program in churches is on hold because of COVID-19, but the organization is operating two emergency shelters that remain open.

About 1 in 25 students was homeless countywide in the past academic year, he said. If considering younger siblings and parents, “We’re probably talking 12,000-plus people in family units who experienced homelessness at some point last school year. We are anticipating a huge increase in those numbers coming out of the COVID shutdowns and heading into the winter months.”

Where these families stay after loss of a house or apartment is often on relatives’ couches, in vehicles or motels if they can afford them.

Following COVID-19 restrictions, Family Promise turned what was a day center for homeless families into a second 24-hour shelter in its South Perry District administrative site. It houses up to 15 people a day. Family Promise has continued running its Open Doors emergency shelter at 2002 E. Mission Ave., which can house 45 people now, although normal capacity was 60 before COVID-19. Use of both facilities allows for social distancing.

“That would allow us to completely serve 15 families and move them from homelessness to a house,” Ader said. “We’re asking teams to raise support to house at least one family at $2,450 (per team) to move them out of homelessness, but even an amount as small as $18 serves one person a day in the shelter.”

“What I really like about this event is especially during this time when our kids are home and they’re complaining about technology and we’re together all the time, we kind of lose sight of the world around us. This would be a great event to sleep in a car for the night with your kids and then talk to them about how difficult that was, what that must be like and kind of open their eyes to what family homelessness looks like.”

Ader has never forgotten one mom’s response to a question of what was most important when she arrived into the program. “She said, ‘It’s going to sound really stupid, but being able to go to the bathroom any time I wanted to was the most important thing because we’d been sleeping in our car, and at night everything is closed, so how do you go to the bathroom? Where do you go?’

“It was just a powerful reality point, something as simple as that we take for granted.”

Damiana Wheeler, a Spokane resident and Open Doors volunteer coordinator, said she came close to homelessness, but before that happened, community resources helped her relocate here from elsewhere in the state because of “a pretty bad situation.”

She remembers what uncertainty in having a home felt like. “There is a sense of loss of community and hopelessness when you don’t know where to turn for the right resources,” she said. “Once that sense of hopelessness sets in, it’s hard to take even the most minimal steps forward toward a positive future.”

“We’ll have a couple of cots, and the smaller kids have chosen sleeping bags,” she said. “We’ll be in kind of a side yard area away from the house. We have a tent if there’s weather, but we’re going to try to go full element.”

Wheeler plans to have candid conversations with her kids.

“I want to get their thoughts about what they think or how they would feel about having to do that every night and sometimes without a sleeping bag. I also am pretty curious if there will be differing opinions because there are such a big age difference. I hope to receive more emotional responses and gratefulness from my teenagers. As a whole, I’m hoping they gain empathy overall for the issue of homelessness for families.”

Ader also will tap thoughts – and possibly complaints – from his boys, ages 9 and 12, while in a parking lot somewhere.

The conversations need to continue, he added, because if eviction moratoriums are lifted in October, this winter could get more difficult for many families experiencing job losses. “We want to spread family homeless awareness now and try to get ahead of it.”