What if we told you that was just one Election Day for 2020 ... and that our next president is actually elected today?

How the Electoral College works

Thanks to a system set up by the Founding Fathers in 1787, we Americans have a fairly complex way of electing our presidents. The votes we cast on Election Day are not direct votes for president – rather, our votes empower electors to cast their votes for us.

The winning candidate in each state gets all that state’s electoral votes ... with two exceptions: Maine and Nebraska award some of their electoral votes by congressional districts, so it’s possible for those states to split their total electoral votes for president. And both did this year. 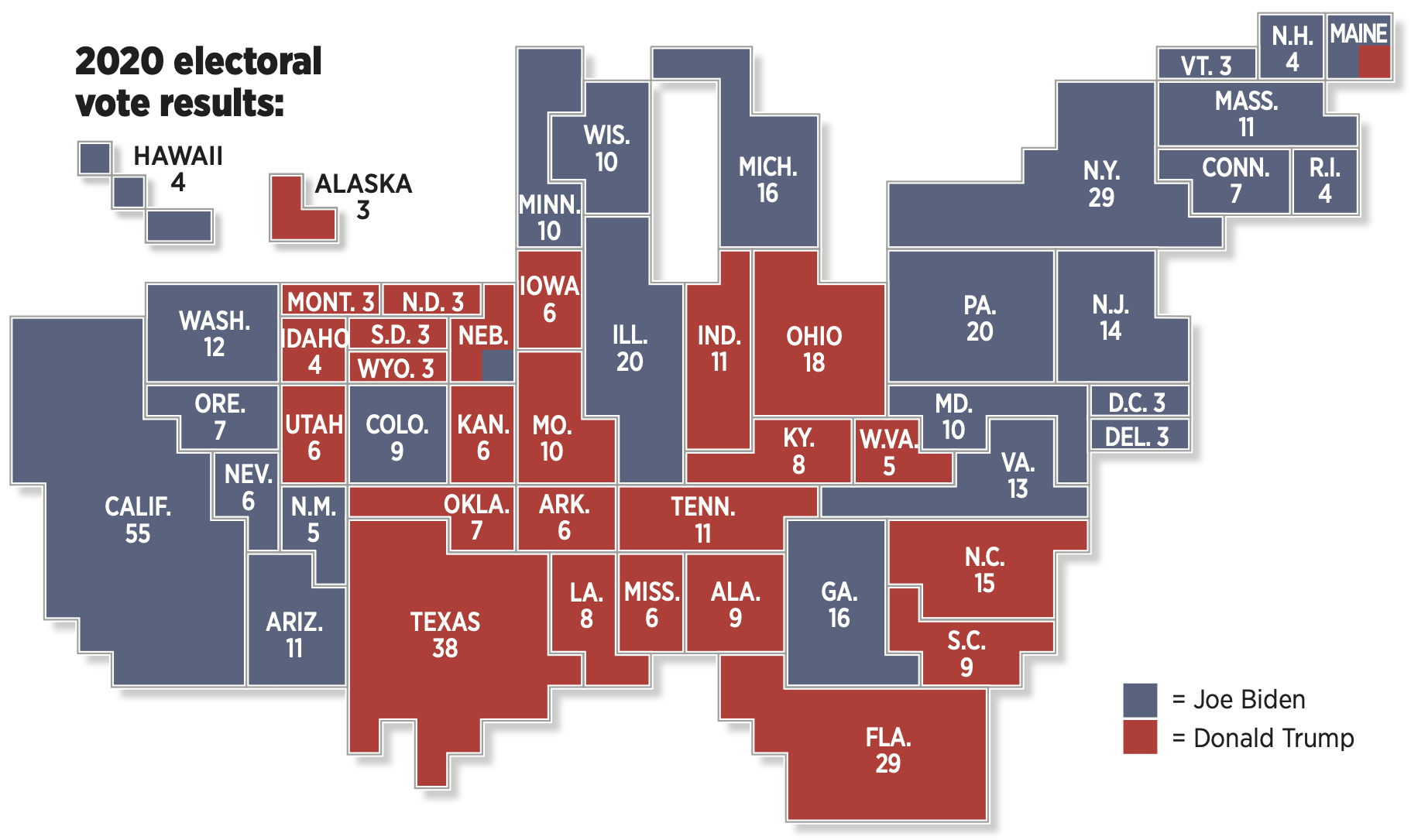 Those electors are pledged to vote for a specific candidate. So basically, they cast their votes the way the voters of their state have dictated in the general election.

MAY-AUGUST
Political parties in each state select who’ll be a part of the Electoral College – the electors who will cast that state’s votes, should their canddiate win that state in the general election. Members of the U.S. House or Senate or other federal office holders are not allowed to serve as electors.

NOV. 3
Registered voters head to the polls to vote. Or, as was the case this year, those voting by mail or in advance must have their ballots turned in or postmarked – in most states, at least. In some states, ballots indicate that voters are actually voting for electors and not directly for the candidates.

NOV. 4-14
Despite what you might believe watching Election Night TV, the counting of votes may go on for days, as absentee ballots and military ballots from overseas trickle in. This year, of course, there was a larger than usual number of advance ballots to count – and, in some states, recount.

DEC. 8
This is the “safe harbor” deadline for having all votes tabulated, disputes settled and results certified by various secretaries of state, governors or state legislatures. If results are still in dispute on this date, the governor is required to file a certificate to the Electoral College explaining how it was resolved.

DEC. 14
The real Election Day: 538 electors in 50 states plus the District of Columbia meet in their respective states to cast their votes for the candidates for whom they have pledged. Electors selected for the losing candidates stay home. These ballots must be received by the Electoral College by Dec. 23.

JAN. 6, 2021
At a joint session in the Capitol, the Senate and House open the votes cast on Dec. 14, tabulate the results and then announce the winners. If members of Congress have objections, they can raise them at this point – time is set aside to debate any disputes or objections. In 2017, Democratic members of Congress disputed results in Alabama, Florida, Michigan, Texas, Mississippi and the Carolinas.

JAN. 20
The president and vice-president are sworn in – usually in a temporary platform built on the West Front of the Capitol – at noon.

Occasionally, duly appointed members of the Electoral College don’t vote the way they are directed. They’re called “faithless electors” but their actions are usually individual protests in a vote in which the outcome is certain. There was an epidemic of these “faithless electors” in 2016:

As you can see, though, this doesn’t happen a lot – and again, it’s never affected the outcome of an election. Yet.

Several states had laws in place to penalize faithless electors or to nullify their vote and replace it with one that reflected who was supposed to get that state’s electoral votes.

In July of this year, the Supreme Court ruled in Chiafalo v. Washington that such laws are constitutionally valid. So we’re likely to see more laws like this in the future.