Spokane brothers Jason and Chris Gass did their research before opening their brewery, YaYa Brewing Co., in Spokane Valley in October 2019, but nobody plans to be operating during a pandemic when embarking on a new endeavor.

Five months after an unexpectedly strong start, YaYa, the nickname of the Gass brothers’ sister, Lara, who was killed in a car accident in 2014, found itself having to close down except for to-go, curbside pickup and delivery. Then after reopening in the summer, YaYa shuttered again in November amid a spike in COVID-19 cases.

Like many businesses short of closing, YaYa pivoted to keep operations going, and I caught up with the Gass brothers at YaYa last Wednesday in person and socially distanced. Jason, 32, returned to Spokane from Maine after a career in aviation, and Chris, 38, also works as a data analyst at Washington State University.

You celebrated the first anniversary of YaYa Brewing not too long ago, and the majority of the time you’ve been operating has been during a pandemic. Tell me about the first year of YaYa Brewing.

Chris Gass: We actually exceeded production expectations by about 30%. Production, however, doesn’t necessary translate into revenue.

Jason Gass: There has been a lot of brewing, but our wholesale is definitely down right now. We were open for five months, and everything was excellent. Then the shutdown happened, and our wholesale died with all the restaurant closings.

Chris Gass: The tasting room is where we get a lot of our business. Like everyone, we’ve had to close, then reopen, then close and reopen. It’s been a roller coaster.

Jason Gass: It’s been difficult but in a fun way. On a production, how do you predict what you’re going to make and how much you’re going to make if you don’t even know if you’ll be open? You can’t predict. We’re learning as a new business, and then you throw a pandemic into it. It steepened the curve. It has been very interesting adapting the first year. 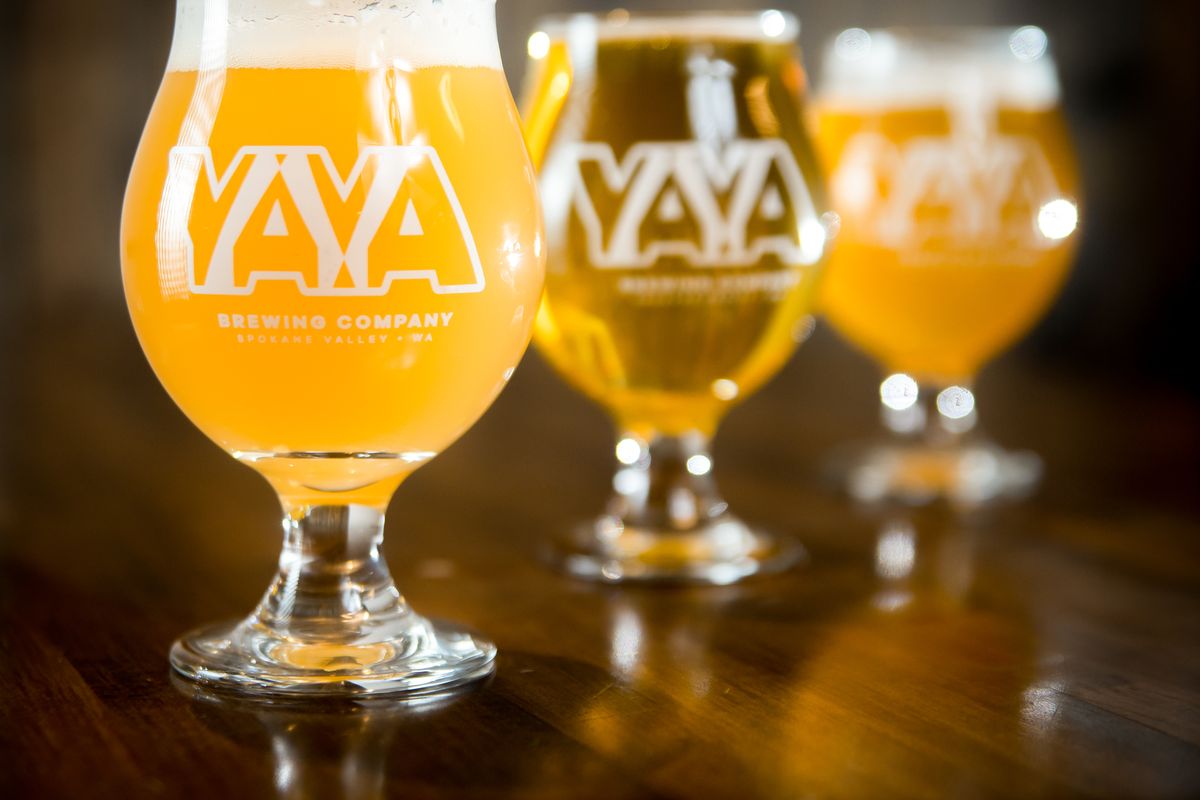 What are you doing now to sustain and hopefully remain in business into the new year?

Jason Gass: We’re producing. We’re canning tomorrow. We actually did our first can run in February because we were always planning to put beer into cans. That was serendipitous because the shutdown happened on March 15. A lot of businesses prefer cans because it’s an easy transition for customers.

Chris Gass: The other thing was the website. We started selling beer online for to-go, curbside and delivery. Now Jason, instead of delivering to wholesalers, is delivering to your front door.

We have had to explore new avenues, and our plans have been expedited. We never planned to go out of state until after maybe three to five years, and here we are delivering to Arizona probably starting next week.

What have been your bestsellers in the first year?

Jason Gass: Fluffy Puffy Sunshine is our bestseller. Angel is in the top two. Part of that is because they’re always on tap, and they are our staples. They are also both IPAs, and people in the Northwest love their hops. It’s interesting because they’re both drastically different IPAs. Fluffy is fruitier and aromatic, and Angel is very West Coast and pine-y and citrus with a hint of bitter.

Kosch, which is very seasonal, also is doing very well right now, as is our stout. It’s a Christmas and winter beer with cinnamon and lactose. And Riverbend, the vanilla coffee porter. You can pour it over your Cheerios or ice cream. We keep innovating and coming up with new stuff.

Why open a brewery in Spokane?

Jason Gass: Great question. We had intended to open in Portland, Maine, which is where I was living. The beer industry is booming there, which was part of the problem. We did our research, we actually hired a real estate broker to look at spaces, and it just never really felt feasible. We came to the conclusion that it wasn’t feasible. It was oversaturated.

We grew up in Spokane, both of us, and Chris was still living out here. The network was here, a lot of friends and connections, and we knew the beer scene.

Chris Gass: We looked at other places, too, like Nashville, Florida and some other places in the West, but Spokane is home. We actually wrote our business plan based on Maine but adjusted it to Spokane.

How did you adjust the business plan for Spokane?

Chris Gass: Spokane Valley has been incredibly business-friendly. They’ve been helpful every step of the way, and we couldn’t have asked for a better business partner. This entire area has been great.

Jason Gass: The brewery and beer scene here wasn’t as saturated or mature as in other places, and we wanted to be part of that growth phase and become part of the explosion that is happening. Something like 10 breweries have opened after us.

Just last week, Spokane was named one of the top beer drinking cities in the country. Does this surprise you?

Jason Gass: You have to take those rankings with a grain of salt, but it’s great that Spokane is finally being recognized as a brewing community. Anyone who opens a brewery sees that. This market wants it. It’s not surprising at all because there is such a boom with beer right now in Spokane.

Is this the first time the two of you as brothers have worked together?

Jason Gass: You mean other than raking the lawn?

You learn a lot about each other, and, first of all, it’s great support. I can always trust Chris to tell me how he feels. Growing up as brothers, we aren’t going to sugarcoat anything, and that key has been the most beneficial.

Chris Gass: I think the biggest benefit is that our personalities are so different. Jason is a type-A salesman out front and creating networks, and I’m more of an engineering-type brain trying to perfect the product. How can we be more efficient, better and introduce new flavors? I love sitting in the back creating new recipes. Recipes and record keeping are my forte.

Pandemic aside, what is the biggest lesson you’ve learned in your first year of business?

Jason Gass: The biggest lesson that I’ve learned is to ask questions. When I go out, I try to be friends with everybody, and that doesn’t necessarily work when you’re trying to run a business. You have to ask questions and make sure everyone has your best interests in mind as much as you do.

Trust but verify is probably the biggest lesson that I’ve learned in the past year There is genuinely something new to learn every day, which is incredibly fun. Open ears, open eyes.

If you had to start over, what would you do differently?

Chris Gass: It’s hard to say because if COVID wasn’t going on right now, I can only assume that we would be selling more beer. Even one or two years from now when we look back and try to forecast from previous results, we’ll have no idea. All this data from basically March on is unusable.

But we are 100% for COVID mitigation. We are all for it, and we will abide by the rules no matter what. It’s just a level of difficulty that nobody expected, and we’re all in the same boat.

Jason Gass: If you come in and purchase any volume of Angel IPA in the tasting room, a percentage of that goes to local charities in our sister’s name. That’s really important to us because that IPA and the brewery are named after Lara. They’re an homage to her. Growing the Angel Wings program is one of the most important things to us as we move forward.

What are you looking forward to in the new year besides reopening?

Chris Gass: In the next year and forthcoming years, seeing Spokane increase its presence. It’s undeniable that the beer and food scene is growing. The Spokane scene is becoming more of a player regionally and nationwide, and seeing the way that the Spokane brand is increasing, I am excited to be a part of that and help increase the awareness.

Jason Gass: I always look forward to making new beers. That is one of the things I love doing. I enjoy the creative aspect of it. We’re releasing a brand-new beer tomorrow. And from a business perspective, the vaccine.

The day that we can have a full house packed in here, customers shoulder to shoulder up at the bar, friends and family enjoying beers around the table and in our tasting room, I am just absolutely stoked for the opportunity to get to do that again.