As of Thursday, there were 129 registered racers for the Feb. 9 Spokane Langlauf race. To register, visit spokanelanglauf.org/. Registration costs $35. Day-of registration costs $40. Kids with an adult race for free.

Skis can be rented at Fitness Fanatics. Call 922-6080 or visit fitfanatics.com/

What’s in a name

That included introducing many to the idea of groomed trails, which make the sport faster and smoother.

“For the most part cross-country skiing was just going off in the woods (at that time),” Ray said. “It was more like sliding in snowshoes.”

So Ray and his good friend Kim Momb organized the first Langlauf race at Achilles Ranch near Sacheen Lake. It came together a bit haphazardly, with Ray spraying orange paint on snowbanks to direct people to the race.

Two hundred people signed up for that first race, according to Cris Currie’s book “Spokane’s History of Skiing.”

“With a $5 entry fee and $200 in prizes, the race was considered successful enough to keep doing,” writes Currie. “But fickle snow conditions would cause frequent postponements and cancellations in years to come.”

Several races in the early ’80s had to be postponed for weeks. These Langlaufs were two-day events with various race distances from 5K to 20K for men and women.

For the next decade organizers did their best with the intermittent snow. At the same time sponsors made it possible for organizers to give away more and more prizes, one reason the race continued to grow in popularity. In 1988, the nonprofit Langlauf Association was formed. In 1990, the race moved to Mount Spokane with its more consistent snow pack and newly constructed Nordic skiing center. Plus, 17 kilometers of ski trails had been cleared, a plowed Sno-Park area had been built and a $55,000 grooming machine was secured through Washington Parks and Recreation Commission. 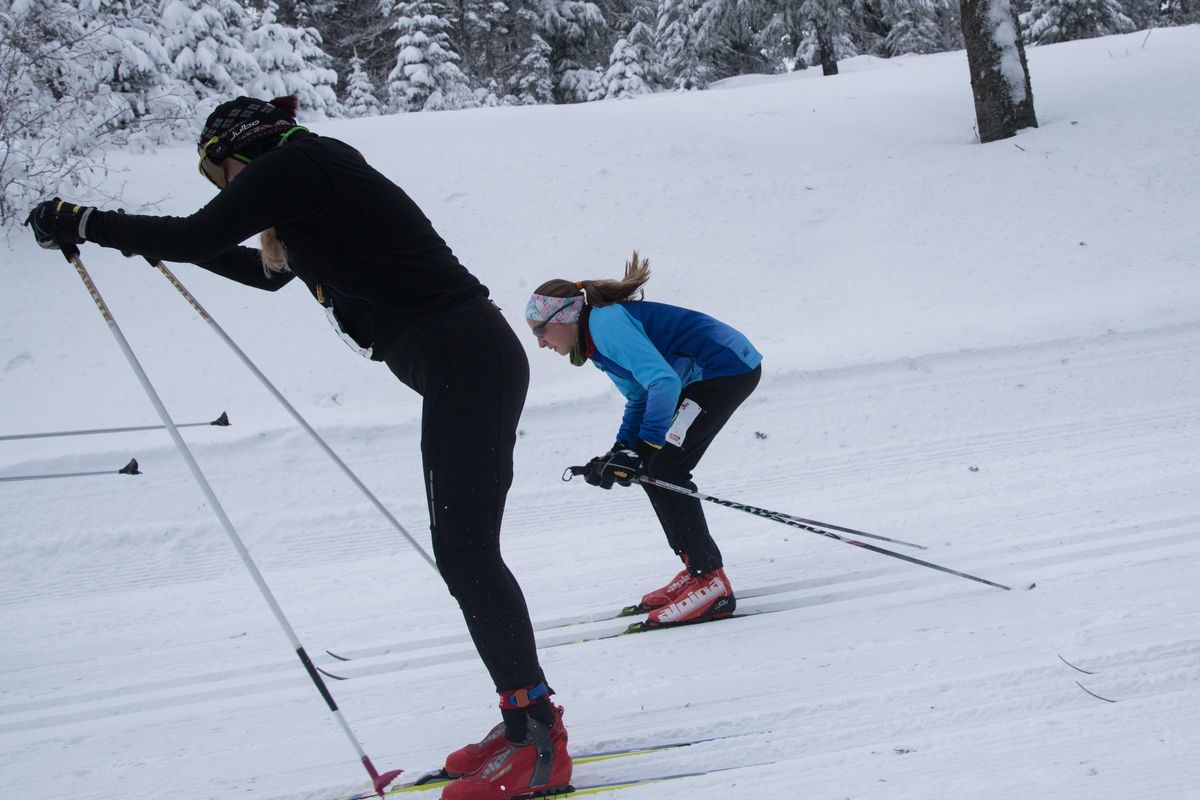 Bridget Burns, 14, flies by the competition at the start of 39th Spokane Langlauf cross-country ski race, Sunday Feb. 10, 2019. Burns was the first female to cross the finish line with a time of 37 minutes and 37 seconds. ELI FRANCOVICH/THE SPOKESMAN-REVIEW. (Eli Francovich / The Spokesman-Review)

New technology – including specialty waxes for skis – led to faster and faster finishing times. In 1993, Brian Erickson, then 17, finished in 26:43, a course record.

“I think at our hey day we were really close to 400 people,” Ray said.

Still, the race has remained popular. The one age class that has suffered is the 30-to-45-year-old, Ray said, though that may be changing.

“You’re starting to see a resurgence in that,” he said. “The lower 30s people are coming up and enjoying it.”

Food, drink and prizes make the post-event festivities all the merrier. And, like Bloomsday, it’s a family-friendly affair featuring elite athletes on the same course as bumbling newbies.

“I think more than anything it’s a celebration of winter and being outside and enjoying the sport of cross-country skiing,” Ray said. “That’s why we do the prizes the way we do. The best prizes don’t go to the person who finishes first. Someone who finished last could walk away with a brand new set of skis, or an overnight stay and trail pass to the Methow.”