A GRIP ON SPORTS • The mind plays tricks on all of us occasionally. What we once saw as mediocre becomes good. The good becomes great. And our memories evolve in such a way as we begin to think of players as something mythic, allowing us to remember them as the best of all time. Then again, oftentimes they actually were.

• When Steve Hutchinson was elected to the Pro Football Hall of Fame over the weekend, our memories began to kick in. The Seahawks’ first true team glory days. The Super Bowl. Mike Holmgren. Shaun Alexander. Lofa Tatupu. 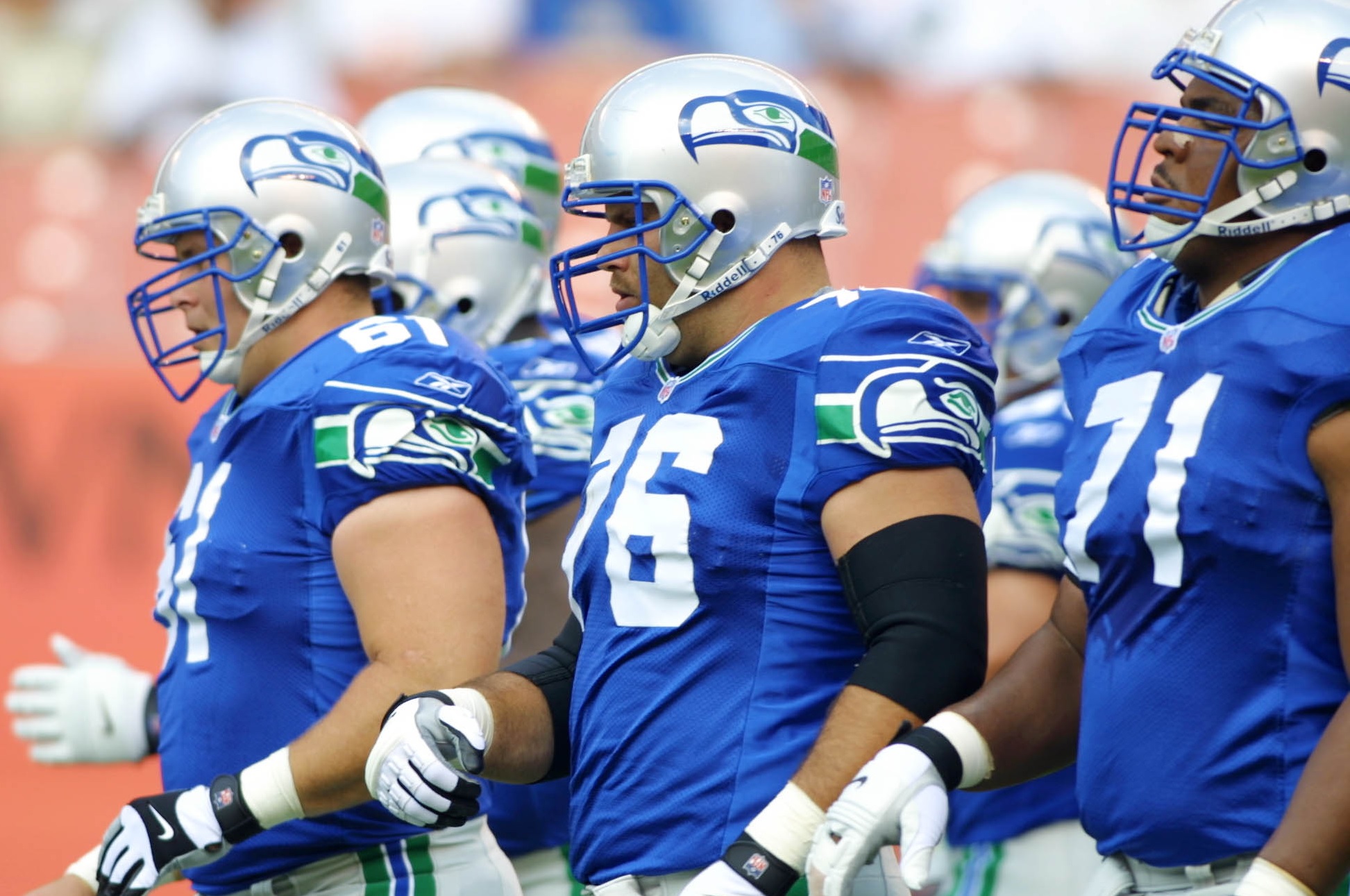 But most of all Walter Jones and Hutch, anchoring the left side of an offensive line that road-graded folks, allowing Alexander to rush for nearly 2,000 yards and win MVP honors.

How good were they? In our memories they were nearly perfect. And now others agree. The two are among the best to ever play the game together.

The evidence is clear. There are only four tackle-guard combinations that played at least four years together in which both players are in the Hall. All led legendary offensive lines. All but one duo appeared in the Super Bowl together.

The four sets are, arguably, the best of all time.

– Forrest Gregg and Jerry Kramer, who anchored the right side of the great Green Bay Packer lines of the 1960s;

– Art Shell and Gene Upshaw, who for 13 years played side-by-side for the Raiders;

– Gary Zimmerman and Randall McDaniel, the Vikings’ left side for four seasons in the late 1980s and early 1990s;

– And Jones and Hutchinson, the two who not only opened holes for Alexander but protected Matt Hasselbeck’s blind side from 2001 to 2005.

While the two were together, Jones and Hutchinson allowed those of us who value offensive line play above all else to drool in anticipation every time the ball was snapped. Who would Jones pancake this time? Who would Hutch drive 11 yards backward? How big would the hole be Alexander ran through?

It was a golden time. And it ended way too quickly, when the Seahawks couldn’t (or wouldn’t) pay Hutchinson enough to stay in Seattle.

Next summer, when the Hall of Fame inductions occur, Jones and Hutchinson will be together again. Unlike their pairing in Seattle, their time in Canton will last forever. As it should be.

Gonzaga: Last year, a great season for the Zag women was derailed by late injuries. Could the same thing be happening again? Jim Allen examines the latest blows to hit the 11th-ranked Bulldogs. … The men are still ranked second in the nation, though they fell further back of Baylor yesterday. Jim Meehan has that story as well as a couple of honors awarded Filip Petrusev this week. … The Saint Mary’s game this Saturday night will be on ESPN. Sean Farnham will be on the call. I wonder what Moraga hotel he’ll compare to the Davenport. Wait, there isn’t one. … Jim also spent some time yesterday talking with Larry Weir for the latest Press Box pod. … Elsewhere in the WCC, BYU has a great opportunity to return to the NCAA Tournament.

WSU: The next time the Cougars lose a committed recruit late in the process, there cannot be any whining by their fans. Yesterday, a player who has been committed to Arizona for a long time decided to switch to Washington State and is expected to sign tomorrow, when football’s second signing period opens. Theo Lawson has more on defensive back Chau Smith. … Is it possible if Mike Leach had stayed, the Cougars would have had a Stanford grad as their quarterback next season? K.J. Costello picked Leach and Mississippi State over Washington as a grad transfer landing spot. … Around the Pac-12, the biggest game last night came on the women’s side, where third-ranked Oregon went into Connecticut and handed the Huskies their worst loss ever in the history of their arena. … Utah’s men have been awful on the road. … UCLA’s deficit isn’t going over well. … Arizona may have finally figured out its lineup. … In football news, USC's Willie Wood was one of my heroes when I was a kid. He died this week.

Idaho: The Vandals picked up their second conference victory, edging Sacramento State on the road. … The Vandal women routed Sac State in Moscow.

Preps: Odessa’s Ryan Moffett became only the second Washington high school player – and the second in two years – to top the 3,000-point scoring mark. The senior guard scored 42 points in a win over Valley Christian last night. Dave Nichols has more in this story. … Justin Reed has a preview of Central Valley and Mead’s upcoming gymnastic regional that will decide the GSL’s lone 4A berth at state.

Seahawks: The Hawks need to decide which running backs can stay healthy. … The 49ers loss is a reason for Seattle fans to celebrate according to Matt Calkins.

Mariners: Marco Gonzales and the M’s reached agreement on a contract extension that buys out the left-hander’s last year of arbitration and his first season of free agency. … With Mitch Haniger injured, the Mariners decided to pick up another outfielder.

• Usually Tuesdays are kind of quiet. I’m not sure I would use quiet to describe this morning in the sports world. It could be worse, however. We could be working in Iowa. Until later …