A GRIP ON SPORTS • Some days you just have nothing. It’s easy to tell. Before you begin writing, you are scrolling through Twitter trying to come up with a subject. It’s a pathetic cry for help. And today it didn’t work. Instead we decided to look at the top eight college basketball teams in the nation, the eight teams in the running for the top four seeds of the NCAA Tournament.

• We start at the bottom, with Florida State. The Seminoles were ranked eighth heading into last night’s game at Duke, a game they lost 70-65 despite forcing 21 turnovers. 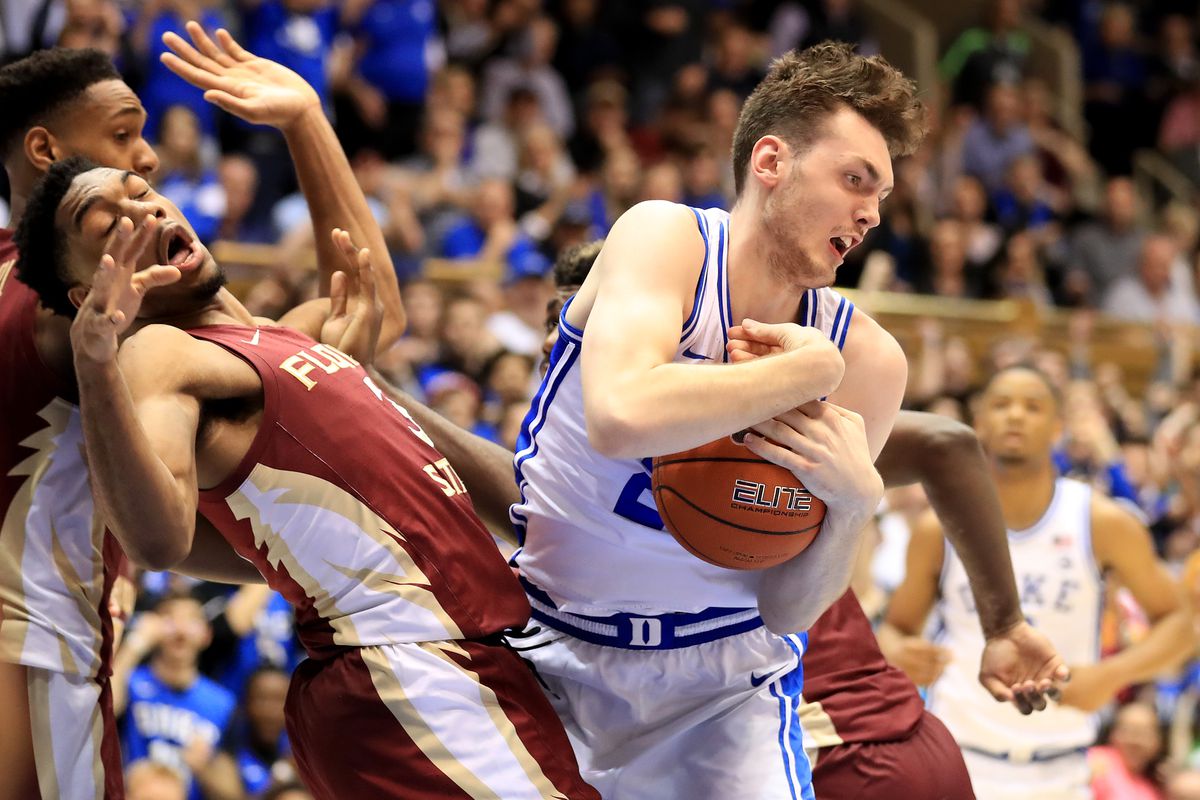 That’s what FSU does. But they don’t do anything else that well. Leonard Hamilton’s team hangs its headband on defense, though even that side of the ball, despite the turnovers, isn’t great. The Seminoles are 15th in Ken Pomeroy’s adjusted defensive rankings. Don’t expect them to rise into a top seed between now and Selection Sunday.

Right above FSU in the Associated Press rankings is Duke, which always seems to find a way to win, oftentimes helped by a call – or in the win over North Carolina, the lack of one. A double dribble in the last seconds of regulation went uncalled against the Tar Heels and led to the game-tying shot. It is better, I guess, to be “lucky” than good sometimes, though Duke this year is both. The Blue Devils will somehow find a way to win enough to earn a top seed.

Why? Because Duke was the first team out of that spot in Saturday’s NCAA preliminary bracket reveal and since then has won at UNC and at home against Florida State. Plus, there is the ACC Tournament ahead and a chance to burnish a resume.

That’s something sixth-ranked Dayton doesn’t have. The Atlantic 10 is less competitive this season, what with the Flyers’ toughest competition either VCU or Rhode Island, neither of which is a BYU or Saint Mary’s. The Rams will, however, take a 10-game winning streak into tonight’s conference game vs. Dayton, so there’s that.

Louisville, which had an early season slump, has rebounded and is ranked fifth, but don’t expect that to last. The Cardinals will roll until road games late in the ACC season at Florida State and Virginia. Getting through those two won’t be easy.

Does anyone expect San Diego State to finish the year undefeated? Well, we do. If the Aztecs don’t, expect them to fall hard. Their “toughest” games remaining – and the quotes are earned – are at Boise State and at Nevada. The Wolf Pack are ranked 77th in KenPom, the Broncos 85th. For comparison, Oregon State is 80th and North Carolina is 87th.

Kansas, on the other hand, has road games remaining at West Virginia (Wednesday), No. 1-ranked Baylor and Texas Tech. All are ranked higher in KenPom than any Pac-12 school. The Jayhawks win out and they will rise to the top seed. Losing any of the three won’t kill their chances to be on the top line in a regional.

Gonzaga, however, has no room for error, even with a road game at BYU looming. Perception matters, and the Cougars, despite KenPom’s rating of 17th nationally, doesn’t have the perceived value of other schools. Saint Mary's does, but after winning by 30 on the road, if the Bulldogs were to lose at home, then the fall would probably even farther than it should be.

Then there is top-ranked Baylor. The Bears’ one loss this season came against Washington, which is looking worse and worse. But it is their only loss. They still have to play West Virginia home and away, Kansas at home and at Oklahoma, so their stretch run isn’t easy.

Taking all of the above into consideration, the top four seeds come March will be …

OK, we have to pick, don’t we? Gonzaga, Kansas, San Diego State and Duke, in that order. Dayton, Baylor, Maryland and Louisville will be the second seeds. And if we get that right, we’re going to spend all of Selection Sunday evening picking and buying lottery tickets.

Gonzaga: Though, as Jim Meehan shares, the men’s poll ranking didn’t change, the women fell four spots after their loss at Saint Mary’s. Jim Allen has the story on the latter. … Jim Meehan spoke with Larry Weir yesterday for the latest Press Box pod. … The Zags’ NCAA future is a subject for some debate. … Elsewhere in the WCC, BYU is respected more by the analytical analysts than the poll voters.

WSU: For the second time this season, CJ Elleby was named Pac-12 Player of the Week. This time, he earned the honor despite playing just one game. But it was a career game. Theo Lawson has more. … Around the Pac-12, if you want to know how to beat Arizona, just watch film of UCLA’s win in Tucson. … Colorado is rising in the rankings and standings. … The Oregon State women’s team lost their best big to injury for the remainder of the season. … In football news, USC has hired a defensive back coach, and highly regarded recruiter, away from Oregon. That seems a bit odd, considering the respective future of the coaching staffs these days. … Arizona State is adding another defensive assistant with NFL experience.

Preps: Basketball playoffs are underway and we have a roundup of girls and boys action.

Curling: The national curling championships are still going on in Cheney. Dan Thompson has a story on the hardships teams face at times just getting together to compete.

Seahawks: The Hawks don’t have to make a lot of changes at safety in the offseason. They made the one they needed halfway through last season.

• There is almost another month of college basketball’s regular season remaining. So it’s probably silly to project seeds. But what the heck. It’s not like anyone will be able to find this column later and make fun of me. Right? Until later …