A GRIP ON SPORTS • The sky is not falling. It only seems that way in Colorado. And maybe around Spokane.

• One year. That’s how long Mel Tucker was the University of Colorado football coach. The emphasis here is on “was.” 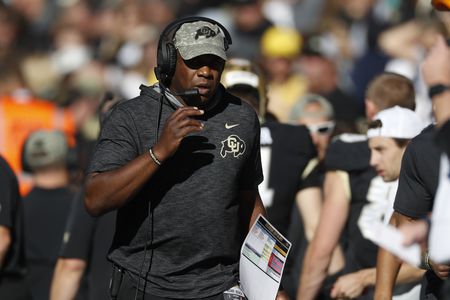 Tucker has spent the past week telling everyone who could listen he was not interested in becoming the next football coach at Michigan State. Sure, he had been an assistant coach there. And sure, it is one of the premier jobs in the Big Ten, but nope, Tucker wanted everyone to know he was committed to Colorado, the school a little more than a year ago that gave him his first opportunity to be a head coach.

Tucker wasn’t interested unless the Spartans came up with more money. Seems like, after Cincinnati’s Luke Fickel said no, Michigan State decided to offer Tucker more.

The talk about commitment and staying in Boulder and building a future? Words. Money talks and coaches walk. According to reports, Tucker is walking to East Lansing today.

It’s that simple. Remember that next time a player wants to transfer.

By the way, don’t come at me with “everyone would do it.” No. Maybe you would. Maybe most people you know would. But some of us made many decisions in our life based not on money but what was best for our family. And commitments we had made.

• Here’s another thing to remember: The residents of the City of Spokane and the patrons of the Spokane School District aren’t the same set of people. A majority overlap, sure, but there are differences.

Just wanted to make that clear. That way, when your friend or neighbor trots out his or her argument voters spoke their will about a downtown stadium, you can remind them not everyone who lives in the district – the body paying for the stadium – got to vote on it. And others, who don’t pay taxes to the district, had a say.

It’s just part of the absurdity of the city’s 2018 advisory vote concerning whether to build a high school football stadium downtown or back at the Albi site.

At the time, there was concern a new parking structure would need to be built for the downtown stadium to be viable. The city was being asked to come up with $10 million to help with the construction.

That was the crux of the advisory vote. Problem is, the vote wasn’t even needed. Because a parking garage was never needed. A study of the area’s parking, which wasn’t finished until too late to make a difference in the vote, showed that. (We wrote about it at the time and our feelings haven’t changed.)

Building a new stadium downtown would make the area around the Arena a sports complex that rivals any in the nation for a city this size. It’s a chance to do something special – and allows the city to add more youth sports fields at Albi, fields that don’t belong downtown.

Why is this in the public eye again? Mainly because a professional soccer league – Jim Allen has the story about the league’s pitch yesterday – would like to have a franchise in Spokane and knows a local team couldn’t be viable playing in a hard-to-reach, out-of-the-way corner of the city. Downtown would work, just like it would work as a site for Spokane School District’s home field.

The district’s patrons may even tell you that, if they all got a vote.

Gonzaga: It’s been a tough couple weeks for the GU women. But as Jim Allen tells us, this week is special. And no matter what, with five games remaining, the Zags need to keep winning if they want to host the NCAA Tournament’s first two rounds. … Brandon Clarke is flying as All-Star weekend approaches. … Rui Hachimura is expanding his marketing reach once again. … Elsewhere in the WCC, this week’s opponents for BYU aren’t real challenging.

WSU: The Cougars have been successful at home this season. There are reasons for that, built around defense and efficient offense. To find success on the road, Theo Lawson writes, they have to take those things with them. Thus far this season, it hasn’t happened as often as coach Kyle Smith would like. … Around the Pac-12, Washington’s freshman football class made a big impact and the Huskies seem poised to add to it in the future. … Utah has enough quarterbacks even with graduation and a defection. … In basketball news, Colorado’s Tad Boyle is returning to where he started. … Utah has been riding a small group this season. … Arizona’s shooting woes have hurt it on both ends of the court.

Idaho: Quinton Forrest needed a place to play. The Vandals needed players. It was a perfect match. Peter Harriman has the story on how the stars aligned for the player and the program.

Preps: The state playoffs got into full swing yesterday, with gymnastics deciding state participants and the 3A basketball districts beginning. … There were also other districts around the area. … The Great Northern League finished up its season in girls and boys play Tuesday night.

Chiefs: Ty Smith has won a World Championship gold medal. Now he would like to win a Memorial Cup with Spokane. Dan Thompson has the story.

Seahawks: The kicking game is fine, but the return specialists could use some refinement.

Mariners: The M’s signed former Colorado star Carlos Gonzalez to a minor league contract. … Who will be their fifth starter this season?

• Have a good day. Don't worry, basketball will be back this weekend. Until later …