• Sure, the aforementioned matchup is on the CBS Sports Network this afternoon. But it’s not alone. There are 18 games to choose between on this Thursday night (not including the ones you can see in person). 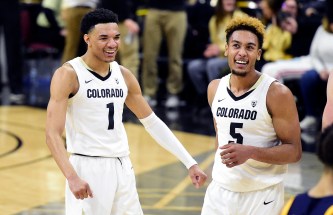 The funny thing is, the West Coast dominates today. None of the games tonight are from the ACC or Big Ten or even the SEC. As the major conferences go, the Pac-12 is pretty much on its own tonight.

The most-important game for the Pac? That would be in Eugene, where the Ducks host 16th-ranked Colorado with the conference lead on the line (6 p.m. on ESPN). Of course, Oregon is ranked as well (17th), so the loser not only will find it tougher to win the muddled conference, but could easily fall out of the polls as well.

Not that the polls really matter, but they do add a certain cachet.

No one else playing this evening has a number next to its name, not even BYU, which should – and should roll at Loyola Marymount (8 p.m. on ESPNU).

Washington State is on the Pac-12 Network tonight (8 p.m.) as the Cougars try to earn a rare win at Pauley Pavilion. The Huskies are not, as they get an ESPN2 date (6 p.m.) against host USC. Washington and the Trojans are both going the wrong way – UW has lost six consecutive times and USC has yet to win in February – and yet they are on ESPN’s second-most powerful channel. That’s the pull of the big city.

• A lot has been made about Colorado losing football coach Mel Tucker to the Big Ten and Michigan State and how the Pac-12 schools just don’t have the money to keep its best coaches.

That may just be true. But why try? How about cutting back the resources for a sport that is doomed anyway and investing them into basketball? Becoming the 1980s’ version of the Big East on the West Coast?

Build facilities second-to-none. Hire head coaches everyone wants to play for. Spend millions in recruiting. Build national-championship-winning powers at every school. Dominate March. Make everyone step up and take notice.

Football is always going to be the weak sister of the Power 5. Media money is just going to gravitate to the bigger markets, only one of which is in Pac-12’s footprint. Punt.

Invest in basketball. Keep all the West’s best players home. Recruit all over the nation – and the world. Put eight or more teams in the NCAA Tournament every year. Become what the ACC used to be.

Or keep playing the roll of Charlie Brown trying to kick the ball to the moon, only to have the other big conferences pull it away at the last minute.

Gonzaga: Yes, there have been injuries lately, the most traumatic the season-ending knee injury suffered by guard Katie Campbell. But the GU women have persevered, and with a sweep this weekend – they host USF tonight – they can clinch at least a share of the WCC title. Jim Allen, who wrote the Campbell story, also has a preview of the game at McCarthey. … The men are the odds on favorites right now to win the NCAA title. At least according to one oddsmaker. Jim Meehan has that story and another on Saturday night’s game at Pepperdine being broadcast on ESPN. When given the opportunity lately, ESPN has been playing the Gonzaga games on the main network. … Elsewhere in the WCC, if BYU is going to add to its NCAA resume, it has to play better on defense. I know for certain I’ve written that before.

WSU: Isaac Bonton is charged with running the Washington State offense as its point guard. He also took on another charge this season, helping to coach a group of eighth-grade boys on a Pullman AAU team. Theo Lawson has a story about the latter and how it works out with Bonton’s “day job.” … Larry Weir spoke with Matt Chazanow in advance of the Cougars’ trip to Southern California this weekend. It’s the centerpiece of the latest Press Box pod. … Around the Pac-12, Washington is mired in an awful slump as it heads into tonight’s game at USC. Maybe the right course is to turn the freshmen loose. … The Trojans need a few more wins. Badly. … Oregon State knows it has to improve its defense to be successful. Same with Utah. … Colorado is atop the conference. But Oregon awaits in Eugene. It’s a crucial game. … UCLA seems to have improved as the season has rolled on. … There are eight regular season games left for Arizona State. … The young Wildcats are in charge as Arizona makes a late-season push. … There’s a brouhaha brewing on the women’s side concerning physical play. It might be really good for the sport. … In football news, Mel Tucker’s departure for Michigan State leaves a mess that has to be cleaned up in Colorado. For now, Darrin Chiaverini is in charge. … USC has completed its assistant coaching staff. … An Arizona State tight end is leaving.

EWU: We have a Valentine’s Day story. A day early. How’s that for giving you a head’s up just in case, you know, you forgot? Ryan Collingwood writes about Eastern basketball player Mason Peatling and wife Laura.

NIC: The Cardinals remained undefeated in NWAC play by edging Wenatchee Valley on the road.

Preps: It was a pretty busy night on Wednesday (we even watched a couple games from Pasco on SWX), but before we get to the basketball, we want to call your attention to Justin Reed’s story on the Unified sports program in the Mead school district. … The GSL had a good showing in the 4A districts, winning three of four in the girls and splitting the boys’ games. … Steve Christilaw has a look at Deer Park’s basketball fortunes this season.

Chiefs: Spokane put 59 shots on goal last night at the Arena. Only two of them found their way into the net, but that was enough. The second one, from Eli Zummack, was in overtime and gave the Chiefs a 2-1 victory over Moose Jaw. Kevin Dudley has the game story.

Mariners: We asked about a fifth starter yesterday. Then the M’s signed Taijuan Walker. You might remember him. He has a shot at the spot, if he can bounce back from arm surgery.

Sounders: The season is about to start. There must be questions. And answers.

• The Houston Astros’ owner said this morning the sign stealing really didn’t have an impact on their success. So why did they spend so much time and money on it? Heck, if they just hadn’t done it and concentrated their resources on other things, they probably would have won the last three World Series. No wonder he fired the general manager and manager. Until later …