For their latest trick, the Gonzaga Bulldogs erased a miserable first half with 10 minutes of near perfection.

Gonzaga put its worst half of the season in the rear-view mirror with a 24-2 run to open the second half, fueling a 71-54 victory over feisty San Francisco in front of 6,000 Thursday at the McCarthey Athletic Center.

The victory clinched at least a share of Gonzaga’s eighth straight WCC championship and 19th in the last 20 seasons. The Zags can claim an outright title with a win over second-place BYU on Saturday.

Senior forward Killian Tillie offered another reminder of how important he is to the lineup and Gonzaga’s postseason hopes. Tillie, who sat out last Saturday’s win over Pepperdine after aggravating his left ankle injury, didn’t miss a beat while producing a Tillie-esque stat line: 22 points, 10-of-13 shooting, nine rebounds, one 3-pointer and a pair of dunks.

“It kind of hurts all the time, but once I’m good with the adrenaline I try to forget it,” Tillie said. “The challenge is to keep the lungs going, keep the air. It was a little tough tonight. And to keep the rhythm, but I have the experience and know what to do, so it’s not a big problem.”

It started slowly with a Filip Petrusev floater in the lane. An onslaught followed as USF committed turnover after turnover and the Zags heated up at the offensive end.

Petrusev continued to score in the paint, Tillie threw down a couple of dunks and Corey Kispert drained two 3-pointers.

“I don’t think it was super complicated, we just didn’t take care of the ball,” USF coach Todd Golden said. “We did a phenomenal job in the first half of taking care of the ball, which obviously limited their transition, kept them out of the break.

Gonzaga made nearly 60 percent of its second-half shots and racked up 10 of its 14 assists. Tillie, Petrusev and Kispert combined for 35 of the 49 second-half points.

Minlend finished with a team-high 22 points, but he made just 3 of 8 shots in the second half. 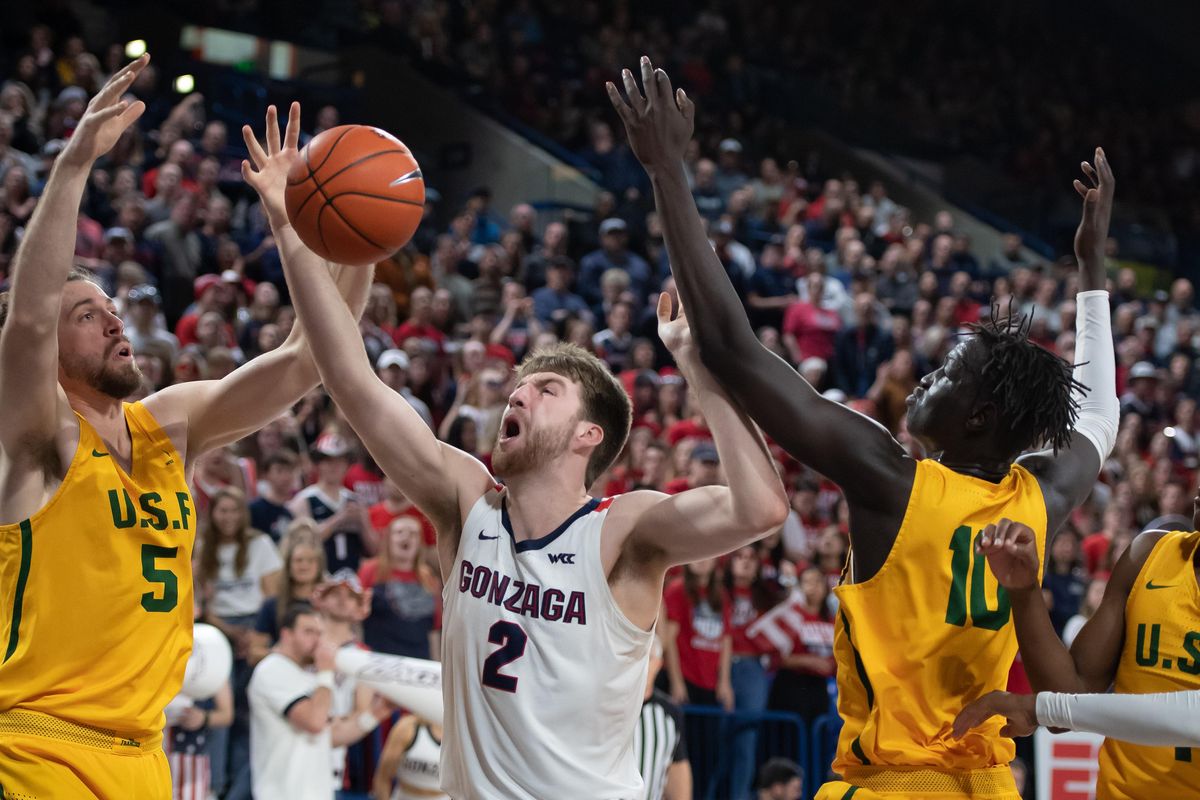 “I thought we were spectacular on the defensive end in the second half. We just did a good job contesting shots, did a good job of giving them one-and-out and got our break going.”

The first half looked like a replay of the first half in San Francisco earlier this month, minus about a dozen points on each side. Gonzaga won that one, 83-79, also with a second-half comeback.

Some of the same issues resurfaced for Gonzaga: Turnovers and yielding offensive rebounds.

The Dons dominated the last 11 minutes, wiping out a 16-13 deficit with a 12-0 burst. Jamaree Bouyea broke down the defense with dribble penetration and dished to Minlend and Khalil Shabazz for open 3-pointers on consecutive possessions.

“We were doing things I haven’t seen in practice or all year,” Few said. “Trying to make tough passes, we weren’t slowing down and catching the ball first. Weren’t finishing strong around the rim. We just weren’t very good.”

The Dons boosted their lead to 31-22 at the break on buckets by Minlend, who had 15 first-half points, and Josh Kunen’s tip-in. The 22 points marked a season-low for the Zags, who had 23 against Oregon in the second half in the Bahamas.