What is a fat bike?

A fat bike is defined as any bike with tires 3.8 inches wide or larger.

The wider tires make it easier to ride over challenging terrain, including snow. As an additional benefit, the wider tires impact trails less.

For snow, fat bike tires should be inflated to 6 psi or less. Anything more will dig into the snow too much. If you’re leaving a groove of an inch or more, reduce the pressure.

If riding in an area groomed for cross country skiers do NOT ride in the tracks set specifically for cross-country skiers. If you have to cross ski tracks, do so as few times as possible

Skiers and snowshoers have right-of-way.

Mount Spokane State Park: allow fat bikes on multiuse trails, including groomed motorized trails. They are NOT allowed on the nordic trails or in the alpine ski area. Sno-Park pass required.

Riverside State Park: When there is enough snow, the City of Spokane and State Parks offer groomed fat bike trails at Riverside.

49 Degrees North: Allows fat biking on its nordic trails. Check conditions ahead of time to make sure the trails are open to bikers. ski49n.com/mountain-services/nordic-center#

Where to rent or buy

On Saturday, there will be a fun fat bike race at 49 Degrees North’s Nordic area. The 7K Chewelah Peak Challenge starts at 11 a.m. with group laps before and after the race. There will be beer and soup.

The race costs $20 and includes the Nordic pass. Demo bikes from North Division Bicycle will also be available. Season pass holders only pay for the race.

On Facebook, search for Spokane’s Original Fatbike Association and ask to join for group rides, condition reports and more.

It’s sunny, 5 new inches of snow blanket the earth and I’m riding a fat-tired bike through the woods working harder than I’d like to admit to keep up with my guides.

The wide tires (a fatbike is defined as a bike with 3.8-inch or wider tires) are great for rolling over rocks or peddling on snow. But it also means you work harder for each foot of forward movement.

It’s worth the effort.

After grinding up a hill, being careful to avoid the newly set cross-country ski tracks, we’re rewarded with a crisp downhill ride. Although I initially felt precarious – flashbacks to hitting icy patches while commuting coming to mind – soon I was happily swinging through snowy corners.

When the goofy-looking vehicles first started showing up in Spokane, they were a novelty. David Nelson, an early fat bike adopter, built his first fattie in 2006 (“Nobody made a complete fat bike back then.”)

“Those first couple year it was kind of cool, but it was also kind of a pain in the ass,” Nelson said. “You couldn’t come across someone with out them wanting to talk about your bike.”

“It’s become very mainstream,” he said. “People see a fat bike now and they don’t think anything of it.”

That’s great for the sport, Wilson and Benish said, and they’re happy to have more riding companions. But it also means a need for more places to ride, particularly in the winter.

“Before, I would basically try to keep track where the big snowshoe group was going for the weekend and I would follow them,” Nelson said. “Or if the military was driving Humvees out at Riverside, that was great.”

Fat bikes need a compacted base of snow, otherwise they’ll flounder. This was evident Monday at 49 Degrees North. Even lightly packed snow crumbled, particularly on uphills, sending my tires punching through and me walking. Groomed cross-country trails make for good riding.

In that way, Benish has pushed the sport forward locally. The retired cement mason has worked with area land managers to groom trails specifically for fat bikes.

Last year, Benish groomed about 10 miles of trail at Riverside State Park. This year, he groomed 20 miles before the snow melted. 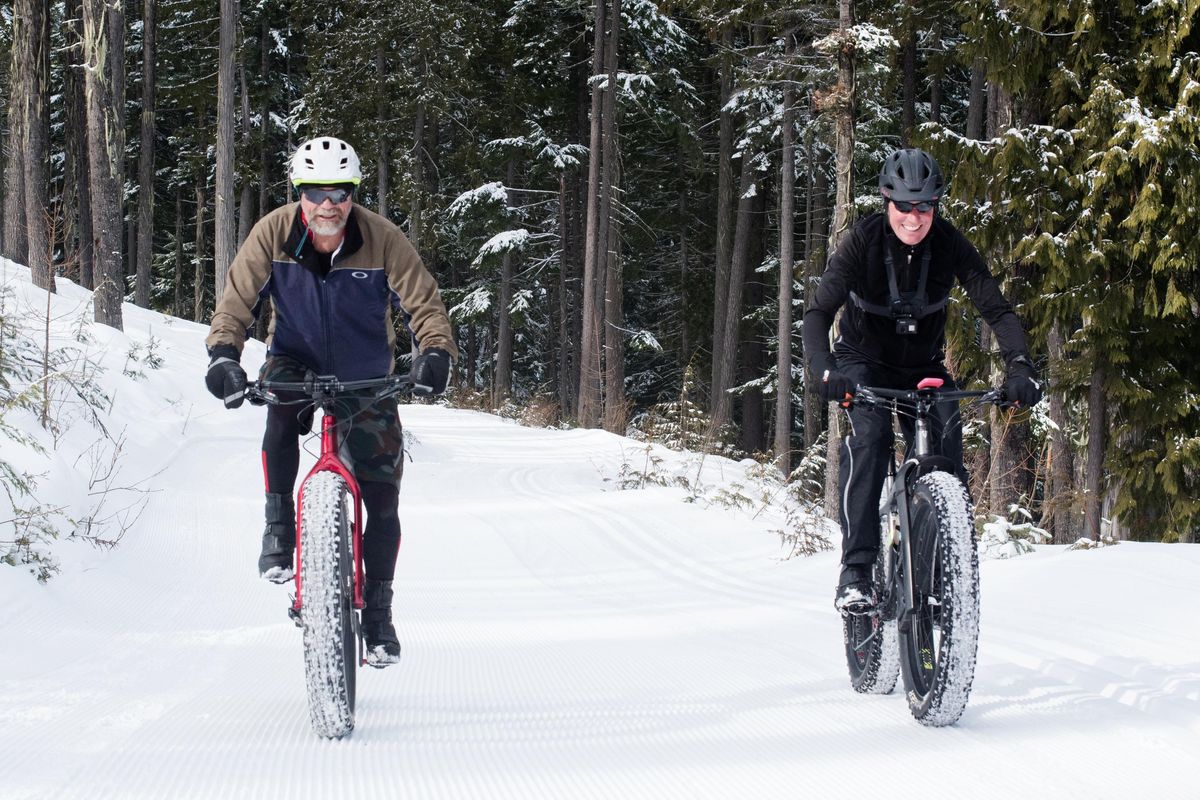 Frank Benish, left, and Brent Schlangen are all smiles while riding their fat bikes at 49 Degrees North on Monday, Feb. 24, 2020. (Eli Francovich / The Spokesman-Review)

“It’s a fun sport,” he said. “It definitely opens up biking yearlong.”

Benish also worked out an agreement with 49 Degrees North Nordic center and he’s demonstrated grooming and riding at Mount Spokane’s Nordic area, although fat bikes are still prohibited there.

Since 2013, fat bikers have been riding on Schweitzer Mountain’s Nordic trails.

Last season, Benish bought a small groomer, which he’s uses to set single-track trails. Unlike larger groomers, he can weave through tress and around obstacles making a more varied and exciting riding experience. Wheel Sport has a groomer that Benish also uses.

Benish is in the process of forming a nonprofit, which would allow him to expand the grooming work.

Those efforts, he hopes, will help get another generation of riders into the saddle and onto the snow.

“I’ve never seen anyone that has thrown a leg over a fat bike and didn’t have a big grin on their face,” Nelson said. “They’re comical, but they will go anywhere.”