The popular event, in which participants splash into the lake’s cold water and rush back to their towels and coats on the beach, attracted groups of friends, families and those looking to start off 2020 with a new challenge.

Ann Apperson, from Spokane, was one of the participants gathered with a large group of friends in colorful swimwear, near a heater and a tent. She has been participating in the Polar Bear Plunge for about four years, including two in which she has been diagnosed with breast cancer.

“It’s not going to stop me,” she said. “Just because I have cancer doesn’t mean I’m not going to live life to the fullest, and this is part of that.”

She said she’s tried to challenge herself this past year and hopes to continue to in 2020. She said the Polar Bear Plunge was also a chance to do something crazy with friends, a group of whom ran into the water with her. 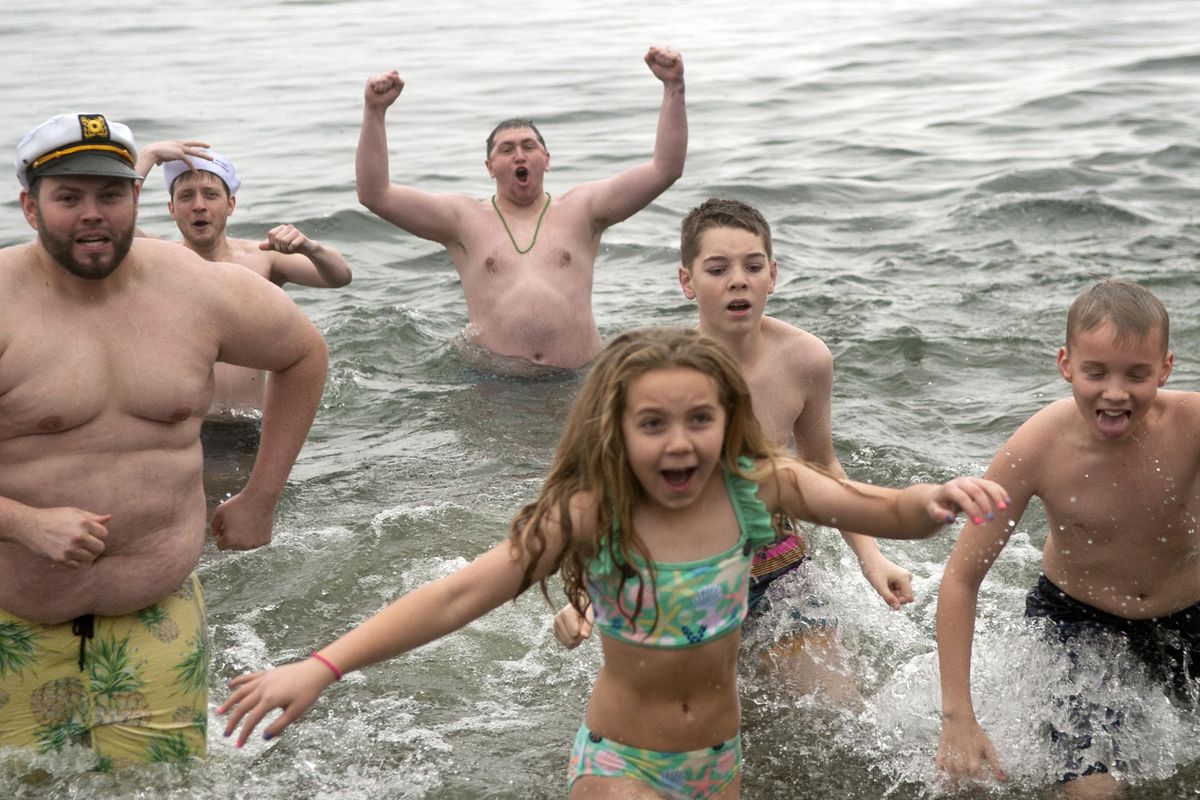 Plungers run out of Lake Coeur d’Alene at the stroke of noon Wednesday at the annual Polar Bear Plunge at Sanders Beach in Coeur d’Alene. (Kathy Plonka / The Spokesman-Review)

Jill Poland, one of Apperson’s friends, said she had been reading and hearing from friends about the event for years, but tried it for the first time this year. She said she hopes that starting off the first day of the year with close friends and a new challenge will prepare her for whatever 2020 has in store.

“After getting this cold, maybe everything this year will seem lighter, and easier,” she said.

This year’s Polar Bear Plunge wasn’t quite as as chilly as in previous years, with light rain starting during the event, light winds and temperatures in the 40s. Last year it was about 30 degrees when the crowd ran into the water.

One participant who said she can handle the Polar Bear Plunge in any weather was 17-year-old Mia Birmingham.

Birmingham said she’s been participating in the polar plunge since middle school and is always trying to find friends who are willing to jump in with her instead of watching from the beach. This year, Mariah Oliveira, her friend from Coeur d’Alene Charter Academy who said she would prefer to do the polar plunge in Hawaii, ran into the water with her.

Birmingham’s father, Doug Birmingham, who has attended the event for years, said the uncharacteristically warm January day may have increased attendance. He said there were slightly more people than he remembered in the past.

Mia Birmingham said she loved the Polar Bear Plunge and how shocked her friends who wouldn’t join were when she followed through and jumped into the cold water.

“It’s oddly fun, jumping in the water with a bunch of crazy people,” she said. “Everybody else runs for the hills because it’s cold, and I’m just standing here saying, ‘Yeah, this is fine.’ ”