On Friday, 395 years of wisdom, courage and sacrifice were honored at Mann-Grandstaff Veterans Affairs Medical Center.

A color guard led the honorees in a processional through hallways packed with cheering well-wishers to the VA Community Living Center where they were celebrated with gifts, speeches and a special cake that read “Happy Birthday Veterans and families of America’s greatest generation!” 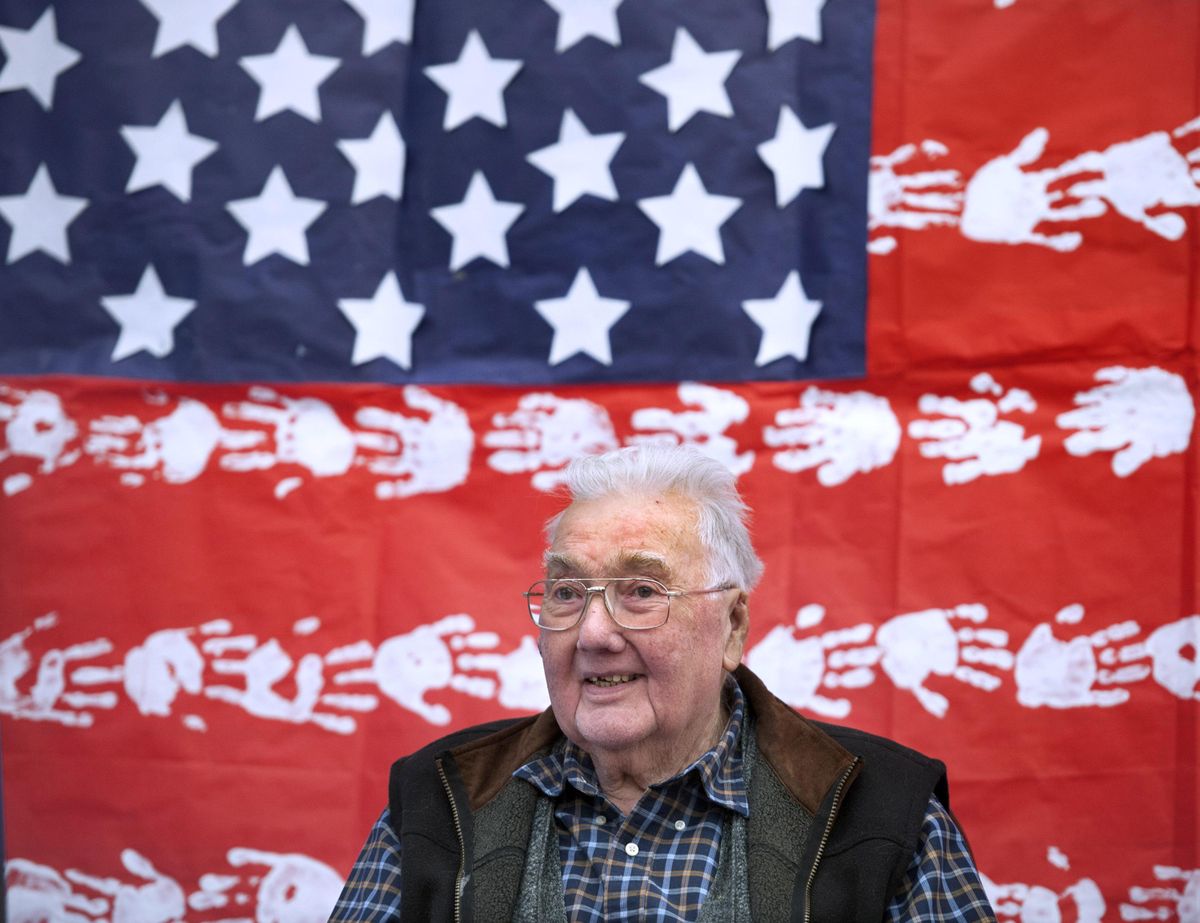 Norm Rubin lied about his age to enlist in the Marine Corps at 17. He was assigned to the USS Philadelphia, a light cruiser, and was aboard when President Roosevelt visited in 1938. From Iceland to Newfoundland to Cuba and beyond, the boy from Philadelphia got to see the world.

“There were 400 sailors and 80 Marines on that ship,” recalled Rubin. “It was a learning curve for me, but we were good Marines.”

He ended up serving 24 years and was part of the first group of Marines who went into Korea during the Korean War.

Rubin retired as a major and credits his time in the service for his good health.

“In the Marine Corps you were always marching,” he said. “And I was a lightweight fighter aboard ship.”

When asked what he remembered most about his years in the military, he grinned.

“I had a hell of a time in the Marine Corps. A lot of fun. A lot of fighting. And a lot of friendship.”

Herman Heuther didn’t have much fun.

Drafted into the Navy in 1944, and trained at Farragut Naval Training Station on the shore of Lake Pend Oreille, he was sent to Guam.

“We called it the island hell,” he said.

The sailors lived in pup tents and were outnumbered by the Japanese still living on the island. When their supply ship was sunk before reaching Guam, things quickly grew grim.

Though rations were meager, they did have plenty of coffee and cigarettes. The food that finally arrived disappointed.

“They sent us Australian mutton,” Heuther said, shaking his head. “It wasn’t fit for a dog. I was there 11 months and lost 66 pounds. I looked like a skeleton with skin.”

He did make a friend, though.

“I acquired a bodyguard – a rat the size of a cat. He slept with me every night.”

Heuther certainly didn’t anticipate living to 100. He grinned. “After 100, I start all over again.”

Edward Moses made a lot of lifelong friends during his 27 years in the Air Force. After training in radio intelligence, he served in Australia, New Guinea and the Philippines during World War ll.

When he was recalled to service during the Korean War, he decided to make the military his career.

“We were really proud of our troops,” Moses said.

He and his family spent extensive time in England when he was posted there twice.

“We enjoyed it tremendously,” he said.

When asked if he had any words of wisdom to offer the young people in attendance, Moses said, “Maintain honesty. Be secure in what you’re doing. Listen to your elders and be a good Christian.”

Richard Grewelle, looking sharp in his Navy uniform, said, “I wear my uniform to let young people know about the three wars I was in.”

He was just 19 when he took part in the allied invasion of Sicily. A year later, he landed on Omaha Beach during the third wave of the invasion of Normandy.

His job as a hospital corpsman brought him into direct contact with the suffering caused by war.

He served in Africa during the Korean War and was recalled to duty during the Vietnam War. Grewelle wouldn’t have had it any other way. Of his 30 years of service, he said, “I thoroughly enjoyed it.”

All of the veterans agreed that being active contributed to their long lives.

“Throw the rocking chair out the door and stay active!”

He addressed the honorees.

“You brought us grit,” he said. “If we forget what you did, our nation will vanish. Because of you and the example you set, this country will always be of the people, by the people and for the people.”