That was about the only resistance the top-ranked Bulldogs encountered the rest of the game.

Gonzaga, which won without its best stuff in its first two West Coast Conference games, put it all together Thursday and put the hurt on San Diego, 94-50, in front of 4,549 at the Jenny Craig Pavilion.

So much for the slow starts and bouts with losing focus that surfaced against Portland and Pepperdine last week.

“We came out ready, that was good to see,” said Petrusev, who had 17 points in 15 minutes as Gonzaga rested its primary players as much as possible for Saturday’s 1 p.m. contest against Loyola Marymount. “The last couple games we came out real sloppy.

“The coaches always try to get us better, especially after those last couple games, but it’s also us. We have our own standards. We’re the No. 1 team in the country. We have to play like it.”

Layups were a common theme in the first half. The Zags pounded USD inside and in transition. Gonzaga piled up 34 paint points in the first half, 52 for the game. Petrusev scored 15 points in just 11 first-half minutes. Twenty of Gonzaga’s 24 fast-break points came in the opening half.

Every USD missed shot or turnover – there were plenty of both – seemed to start Gonzaga’s transition game. Senior point guard Ryan Woolridge, bouncing back from a tough outing against Pepperdine, handed out six assists and had two pretty finishes, one with a hesitation move and another after faking a behind-the-back pass.

“I just felt like I had to get back into the flow of things,” said Woolridge, a Texas native who originally signed with San Diego but left a few weeks into fall semester when his father was diagnosed with cancer. Woolridge’s roommate at San Diego was forward Alex Floresca, who now starts for the Toreros as a senior.

“I was a little off in last game,” added Woolridge, who played three seasons at North Texas before joining Gonzaga as a grad transfer. “That wasn’t really me.” 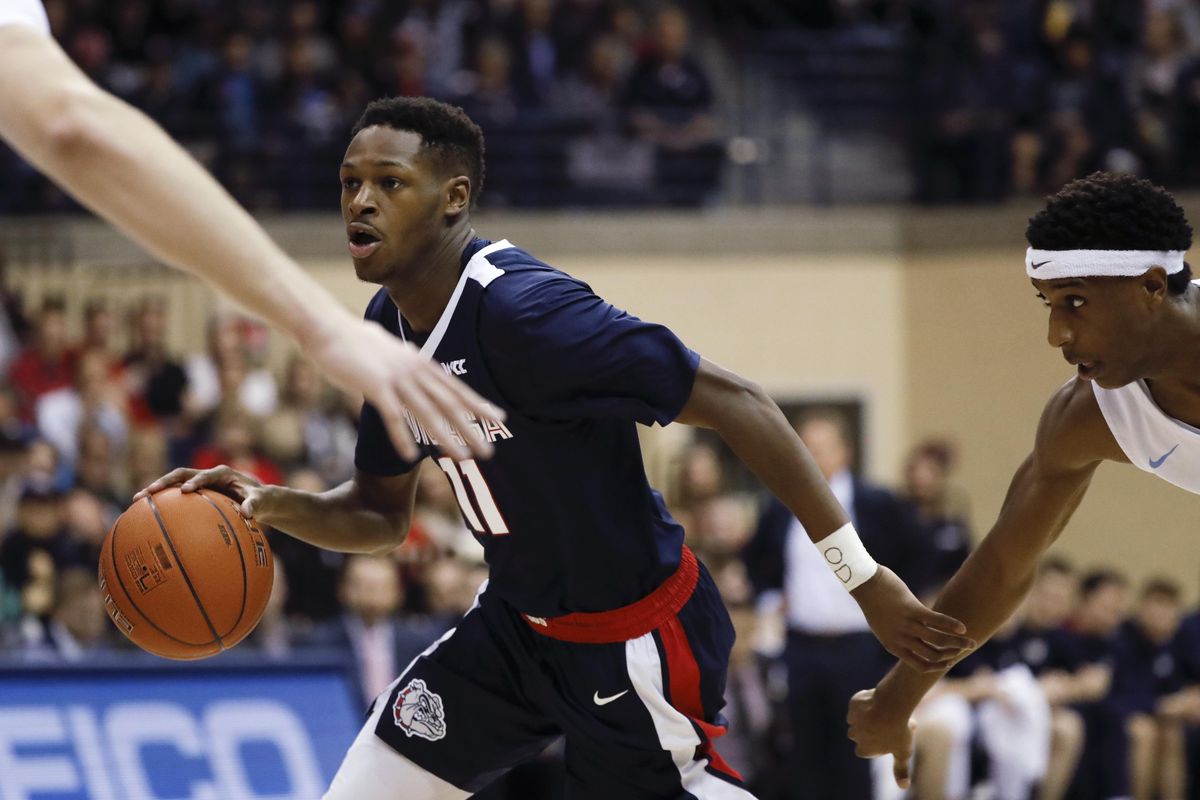 It was 53-16 at the break. Gonzaga missed two dunks and still shot 54% from the field. The Toreros had one field goal in the first 9 minutes. They hit their second with 10:15 left and immediately gave up a Petrusev layup at the other end 5 seconds later.

“That’s what happens when you have intensity,” forward Killian Tillie said. “When we’re patient with the ball, we can get any shot we want. We were patient and it showed. We had great shots, rebounds and fast breaks.”

Gonzaga shut down San Diego’s Joey Calcaterra and Braun Hartfield, the guard tandem that averages a combined 26 points per game.

Woolridge defended Calcaterra, who scored one point in the first half. Kispert locked up Hartfield, who didn’t crack the scoring column until hitting a midrange jumper with 18:42 left in the second half.

“That was definitely part of the game plan,” Woolridge said. “Take those two out of the game and try to make their other players beat us.”

Calcaterra and Hartfield finished with 13 points on 5-of-19 shooting and six turnovers. The Toreros (7-11, 0-3) managed just six field goals and shot 23% in the first half.

“Those two can shoot. I think they maybe had one 3-pointer,” Zags coach Mark Few said. “We didn’t let them have anything in the first half when it mattered. That’s big, because they’re both good players.”

The Zags stretched their lead to 44 in the second half before substituting liberally in the final 10 minutes. Ayayi, who finished with 20 points, six rebounds and three assists, logged a team-high 29 minutes and Woolridge played 26-plus.

“We really wanted to come back to who we are,” Ayayi said. “Playing hard defensively, defense to offense, and moving the ball on offense. We had two shaky games and we wanted to show everybody that’s not who we are.”