THE LIFE AND TIMES OF STEVE GLEASON

Pamphilon releases audio he had recorded while collecting footage for the documentary project of a Saints team meeting in which defensive coordinator Gregg Williams — who had been accused of offering bounties for injuring opposing players in a scandal that came to be called "Bountygate" — urged his players to target specific players and specific body parts. The recording seems to confirm the allegations against the Saints coaching staff, but Pamphilon releases the audio without Gleason’s permission. This leads to Pamphilon’s leaving the documentary project.

Steve Gleason is born in Spokane. 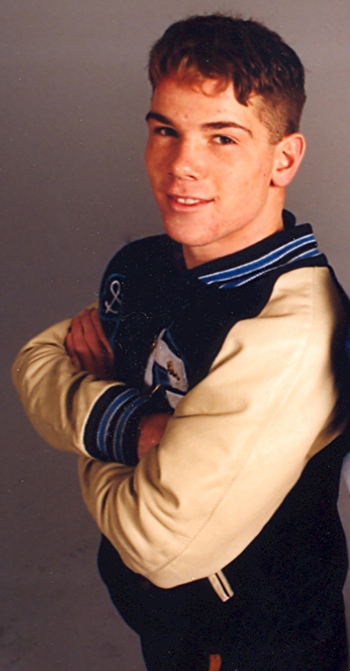 Gleason accepts a scholarship to play football for Washington State. He had also visited Stanford and turned down a visit to Oregon State.

Washington State — with Gleason at weak-side linebacker — finishes its season 10-2 and plays Michigan in the Rose Bowl. 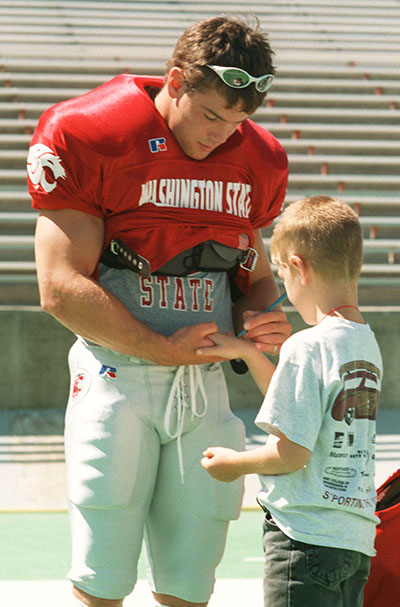 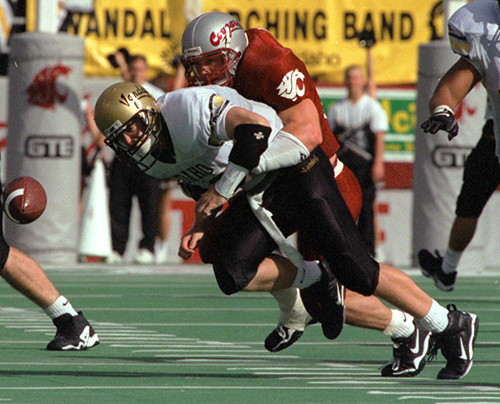 In his four years at WSU, Gleason letters four times in both football and baseball. He also earns academic honors in management information systems and entrepreneurship.

Gleason signs with the Indianapolis Colts as an undrafted free agent. After preseason, he’s released and signs with the New Orleans Saints’ practice squad.

Gleason makes his first appearance in a regular-season NFL game when the Saints host the Denver Broncos at the Superdome. Gleason plays special teams and records one solo tackle. He’ll go on to appear in the Saints’ next two weeks: at San Francisco on Dec. 10 and vs. Atlanta on Dec. 17. 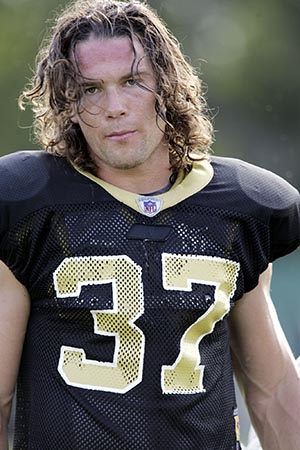 Gleason is chosen by the Birmingham Thunderbolts with the 191st pick of the XFL draft. He will elect to remain with the Saints. 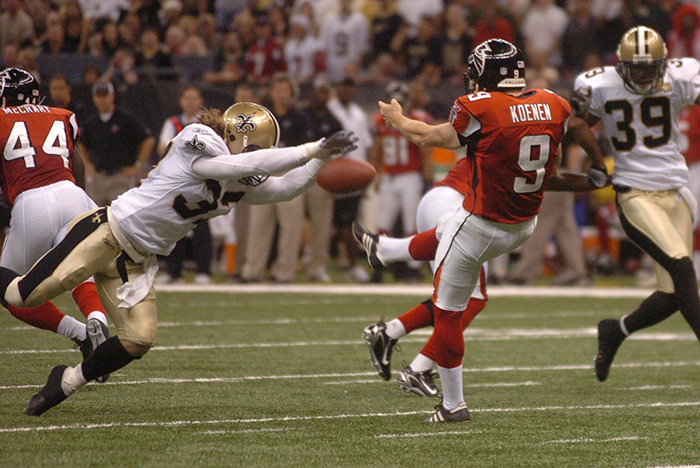 In a Monday Night Football game, Gleason blocks a first-quarter punt by the Atlanta Falcons’ Michael Koenen. Curtis Deloatch recovers the ball in the end zone for a touchdown. This was the first score in the first game the Saints had played in the Superdome in more than a year after Hurricane Katrina. The blocked kick becomes a symbol for the resilience of New Orleans in the face of adversity.

After undergoing arthroscopic surgery on his right knee the month before, Gleason is placed on injured reserve. He’ll spend the entire season on reserve.

Released by the Saints, Gleason retires. He had played in 83 games with one start over eight seasons in the NFL.

Gleason is diagnosed with Amyotrophic lateral sclerosis, ALS — or, better known as Lou Gehrig’s Disease. Gleason and his wife had been seeing a fertility specialist in hopes of conceiving a child. Gleason had also been working on finishing an MBA at Tulane University. He’ll consider abandoning the latter but will complete work on the degree after all. He’ll also kick off Team Gleason, an organization to help improve the lives of ALS patients.

Filmmaker Sean Pamphilon begins work on a documentary of Gleason and his life with ALS. Gleason’s wife finds she’s pregnant. Their new son will feature prominently in the documentary. 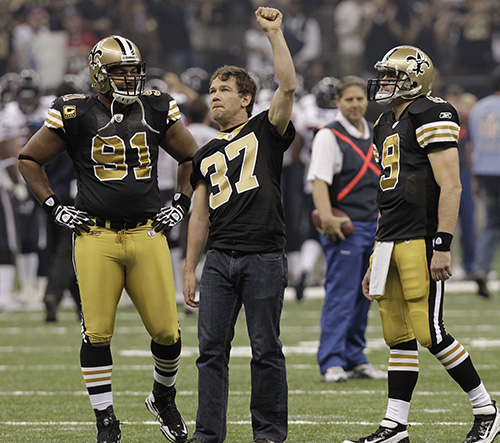 Gleason goes public with his diagnosis. He serves as honorary captain for the coin toss of the Saints’ Week 3 game against the Texans. The crowd roars as Gleason is helped out to midfield by quarterback Drew Brees. After the toss, Gleason leads the crown in a "Who Dat!" chant. It’s this moment that will be captured in the Team Gleason logo and, later still, on the front of Gleason’s Congressional Gold Medal.

Pamphilon releases audio he had recorded while collecting footage for the documentary project of a Saints team meeting in which defensive coordinator Gregg Williams — who had been accused of offering bounties for injuring opposing players in a scandal that came to be called "Bountygate" — urged his players to target specific players and specific body parts. The recording seems to confirm the allegations against the Saints coaching staff, but Pamphilon releases the audio without Gleason’s permission. This leads to Pamphilon’s leaving the documentary project. 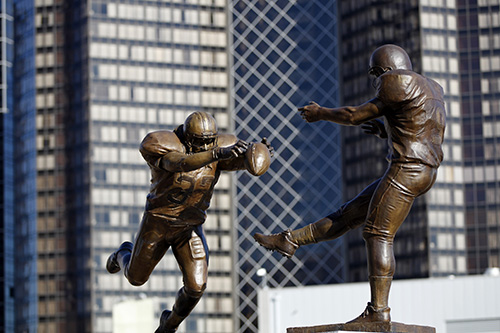 The Saints unveil a statue Gleason’s 2006 blocked punt outside the Superdome.

An Atlanta sports radio station runs a comedy bit making fun of Gleason, his ALS condition and his speech synthesizer. Outrage in Atlanta is immediate. Before the day is out, the three morning hosts have been fired.

Gleason makes an appearance in a Microsoft commercial during Super Bowl XLVIII.

Saints owner Tom Benson donates $5 million to Team Gleason to open a house were up to 18 ALS patients can live more independently. 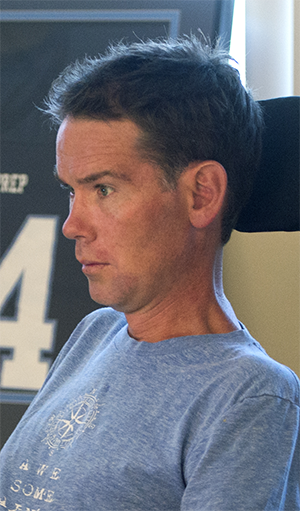 Gleason has what he called a "semi-planned tracheotomy" to help his breathing. Doctors has originally planned to perform a tracheotomy on him later in the year, but breathing issues pushed up the schedule.

At Gleason’s urging, Microsoft creates a system that allows ALS patients to control their Windows devices — and, later, to control their wheelchairs with their eyes. Microsoft goes on to include "Eye Gaze" technology in its Windows 10 products.

Congress passes The Steve Gleason Act to ensure the availability of sustaining communication devices for ALS patients. The legislation has a sunset law and expires in 2018.

Gleason receives the George Halas Award from the Pro Football Writers Association at a Thursday Night game between the Saints and Falcons. In that game, Saints linebacker Michael Mauti blocks a punt by the Falcons’ Matt Bosher and returns it for a touchdown. "Hey, Falcons," Gleason tweets. "#NeverPunt."

World premiere of the "Gleason" documentary at the Sundance Film Festival in Utah.

Congress passes the Steve Gleason Enduring Voices Act to replace the original 2015 legislation. This time, the law is permanent.

Washington State announces it is creating a neuroscience center and will name it for Gleason.

Gleason receives a Congressional Gold Medal for his work in ALS awareness.