Gonzaga has seen way too many of these this season: Another painful victory.

The top-ranked Bulldogs handled BYU 92-69 Saturday night to the delight of a packed house at the McCarthey Athletic Center, but the 6,000 fell silent early in the second half when sophomore forward Filip Petrusev went down on the court, grabbing at his right ankle.

Gonzaga led 45-38 when Petrusev limped off the floor directly to the training room with the help of two trainers. The Zags, essentially down to a six-man rotation, responded with some of their best basketball of the night – and the season, for that matter – and throttled the Cougars the rest of the way.

The Zags reached the 20-win mark for the 23rd straight season and they’re the first to 20 nationally this season. They also extended the longest active home-court winning streak to 34.

“It’s just tough when we don’t have all the bodies that we’re used to,” junior wing Corey Kispert said. “Filip will be OK. He came back in here (the locker room), they checked it out and it’s not as serious as it looked.”

The Zags were just fine for the final 15-plus minutes. They hung up 54 points on torrid 73.9% shooting in the second half.

Gonzaga head coach Mark Few took his customary spot outside the locker room for postgame interviews and scanned the stat sheet for his team’s shooting percentage before the first question was asked.

That figure – 56% for the game – and limiting the Cougars to 69 points impressed the coach.

“For us to hold that team, in a high-paced game, to 69 points is a very good statement by our defense,” Few said. “That’s an excellent offensive team that runs a variety of stuff at you. It’s always something different, and if you guard it one way they’re adjusting, and they can really make you look silly.

“Another excellent effort on the offensive end. BYU’s defense has been pretty stout this year. To get 92 (points) and shoot 56 (percent) is really good.” 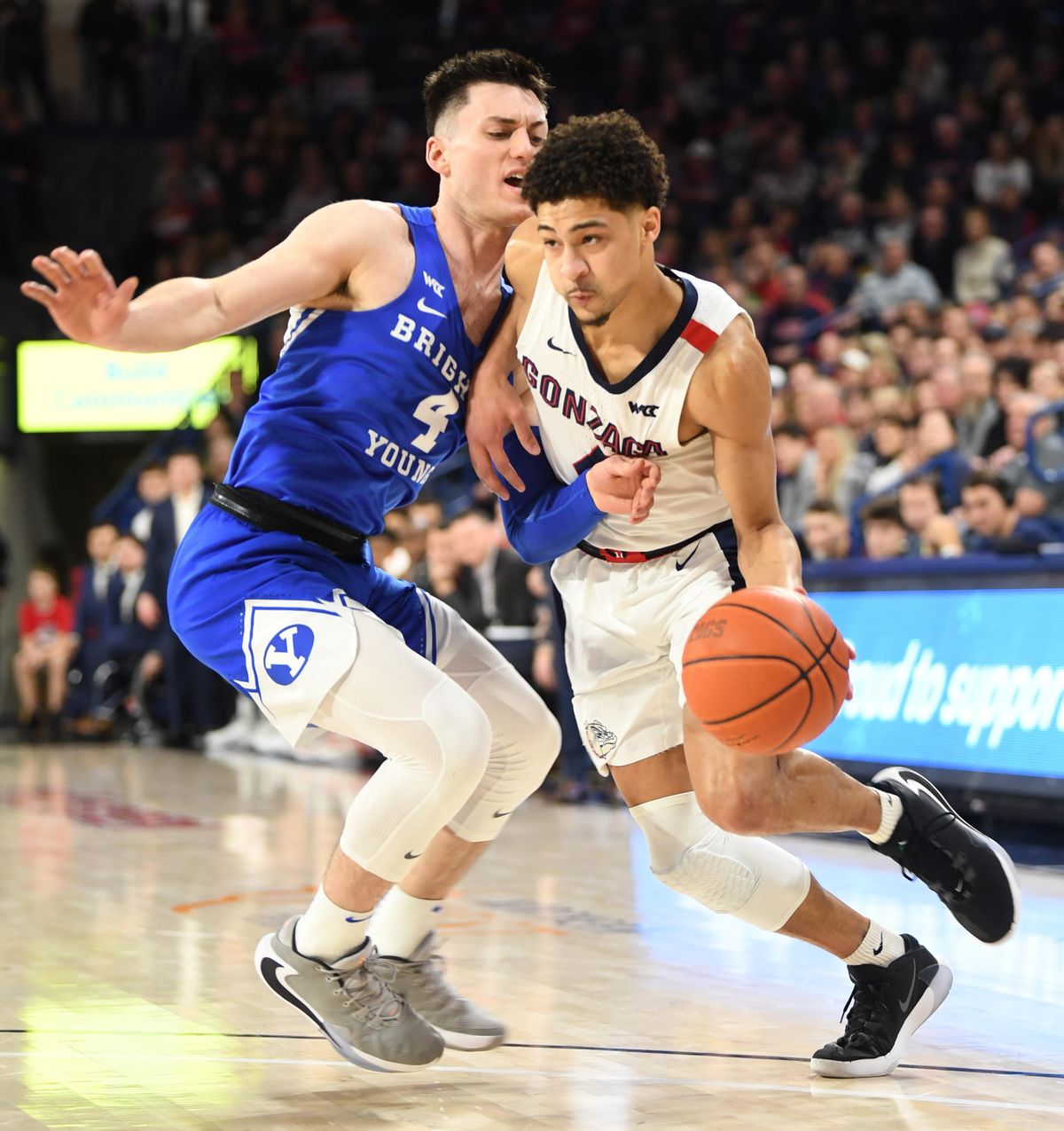 Gonzaga’s Ryan Woolridge (4), right, drives against Brigham Young University’s Alex Barcello (4) in the first half of action Saturday, Jan. 18, 2020 at the McCarthey Athletic Center at Gonzaga University in Spokane, Washington. The Zags led 38-31 at the half. Jesse Tinsley/THE SPOKESMAN-REVIEW (Jesse Tinsley / The Spokesman-Review)

Kispert was 6 of 6 in the second half and scored 16 of his 19 points. Killian Tillie had 22 points and 10 rebounds. Joel Ayayi and Admon Gilder each had 14 points and Ryan Wooldridge added 11 points and six assists.

“It was impressive, it was professional,” Kispert said of Gonzaga’s response after Petrusev’s injury. “Drew, especially, comes in and it’s kind of just business as usual for him.”

Kispert, who played the “4’ for extended minutes in the second half after Petrusev’s exit, drove for a layup and then buried a 3-pointer to start a 15-2 run that put BYU in an 81-57 hole with 4 minutes left.

“I tried to be as stoic as possible for most part of the game, but when the shots started to fall and I started to get it going, I kind of had to let it out a little bit,” said Kispert, who showed plenty of emotion after his 3-pointer.

Tillie, known for his 3-point shooting, did most of his damage inside the arc. He made one 3-pointer but hit 6 of 9 attempts inside the arc and made 7 of 10 at the foul line.

“I didn’t notice that (73.9% shooting), but every time we made a shot the gym was going crazy, so I kind of noticed we were making a lot of shots,” Tillie said. “Good patience and finding good shots.”

The Zags trailed by four in the opening minutes but quickly took control. They repeatedly stung BYU on the offensive boards with rebounds by Timme and Ayayi leading to 3-pointers by Gilder and Tillie, respectively.

BYU played without standout forward Yoeli Childs, who went through pregame drills but sat out with an open dislocation of his right index finger. TJ Haws scored 17 points and had six assists and Jake Toolson added 16 points.