A GRIP ON SPORTS • Living in the moment is not always easy. There are times when it would be so nice to fast-forward to whatever awaits tomorrow or the day after that. Right now is one of those times. Football, around here anyway, is over. Basketball is, at levels, in grind-time, with the real fun still in the future. And baseball? Wouldn’t it be nice if it could just start already?

• When I was a young boy, my dad decided one year to take me to spring training. School was important, sure, but a week in Palm Springs, bonding and watching the Angels, that was even more so. 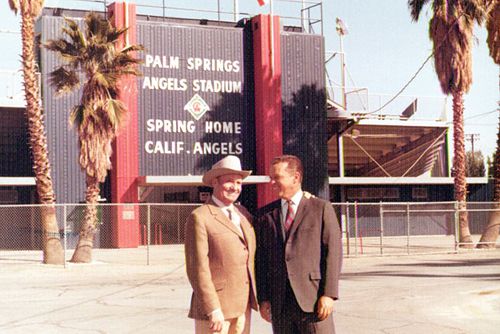 It was a magical few days – and not just because I was able to skip school, or watch baseball or even because, for the only time in my life, was able to corral a major league foul ball.

It was magical because I was there with my dad. Baseball was something that bound us together. It was his past, my future, our present.

It was the subject we could always talk about without arguing too much, the common ground that allowed us to avoid issues we never really wanted to explore too deeply. That never left us.

Nor did the memories of that week.

We did it again a couple more times before I left for college, but the trips never etched themselves in my memory as that first one. After awhile, as I grew older and became too cool to hang out with my old man, we lost the desire to have a guys’ weekend in the desert.

Every year about this time I look back at that one spring training. I was blessed – and I didn’t even realize it.

I was blessed to have a nun teaching me who was a sports nut, so she didn’t put up a fuss about missing the school time. (Or maybe it was because she knew how important the time with my dad was.)

I was blessed to have a father who worked his butt off every day, at times with more than one job, so that he could afford to give his children things he never had – including a week together.

I was blessed to have a love for a sport, to have a spark that was kindled and grew thanks to so many people. It motivated me every day, not just to get better at the sport, but to do the right thing so that it would never be taken away.

Lately, I’ve been doing a lot of thinking about such things. The thoughts have bubbled up due to events locally and nationally that have all but crushed my optimism and joy. It seems almost every day another calamity strikes that makes me want to skip ahead a couple weeks.

You know, when baseball begins again. When the grass turns green, the flowers bloom, the sun shines. When all things – except the Mariners making the postseason – seem possible. When moms, dads, daughters and sons will step outside, limber up their arms and jump-start a conversation – and a connection.

I know it is probably not the reality these days, that other sports and pursuits have eroded the mystical power of baseball in the spring. That’s OK. It’s never smart to think back on your experience and believe everyone else has the same one.

But the lessons learned, the lessons that stay with you as the years go by, those are nearly universal.

The time you have with loved ones, no matter how you bond, is fleeting. The moments you have together, finite. Those are the minutes to cherish, the hours to remember, the days to hold dear. Forever.

WSU: Theo Lawson talked with Washington State’s basketball players yesterday about Kobe Bryant and his legacy. … By the way, there have been some billboards around Spokane concerning Bryant. Megan Rowe explains why. … The Cougars will host Arizona State tonight, kicking off the weekend a day earlier than normal. … Elsewhere in the Pac-12, the home teams have won almost 75 percent of the games thus far this basketball season. … Colorado will try to buck that trend at UCLA. … Oregon has one shooter whose success parallels the Ducks’ thus far. … Arizona coach Sean Miller decided to bench a grad transfer for a half against Arizona State. … In football news, next season’s schedules will test some schools. … Jonathan Smith’s tenure at Oregon State compares favorable to others hired around the same time. … Colorado is going to add more bells and whistles to its defensive scheme. … UCLA not only is losing players, it is adding them as well. … The Bruins need to add a few dollar bills too.

Gonzaga: Want another example of how sports can be a rollercoaster ride? Then read Jim Meehan’s story on GU point guard Ryan Woolridge. Heck, it’s good enough. Read it even if you don’t want that example. … Around the WCC, every team has injuries, including BYU.

Preps: If you are wondering why I’ve been so introspective (and sorry about that) in this space recently, part of it can be explained by reading Dave Nichols’ story today on a couple basketball games that happened at Ferris High last night. … Those games, both won by Central Valley, highlight the GSL girls and boys roundups. … We also can pass along boys and girls roundups from around the area. … I’ve been lucky to have a lot of interaction over the years with the Burnham family. Now Maisie, the youngest of the three children, is a 2,000-point scorer for Liberty High. Dan Thompson has a story that makes me feel really old. Wait, I am.

• The best part of spring? It could be the return of baseball to the radio. There is nothing better than driving around in the car, the window down, heater on and the radio blasting Rick Rizz trying to pronounce the name of some rookie wearing No. 89 as the kid bats in the ninth inning. Ah well, we still have a few weeks before then. There is a lot to accomplish between now and then. But still, can it arrive tomorrow please? Until later …