A GRIP ON SPORTS • Baseball’s Opening Day has been a rite of passage every spring since before anyone alive today can remember. Besides the colorful bunting, the ceremonial first-pitch, the long-winded introductions, there is something more emotional, more from the heart. There is a deep and abiding sense of hope. Of promise. Of optimism. Of potential. Will those feelings still be there when the 2020 season begins tonight?

• If the weather gods permit it (rain is in the forecast), Max Scherzer will throw the first pitch of this delayed baseball season sometime around 7:08 p.m. EDT in Washington D.C. The defending champions plan to raise their championship pennant, have Dr. Anthony Fauci throw out the first pitch, let D.C.’s mayor bark “play ball” and get on with the 60-game season.

In an empty stadium. Such is the state of the world in a pandemic.

But the good news is baseball is being played. Summer, so unusual in so many ways this year, will have one somewhat-regular thing. We will be able to sit down, turn on the TV and watch America’s most treasured sport. 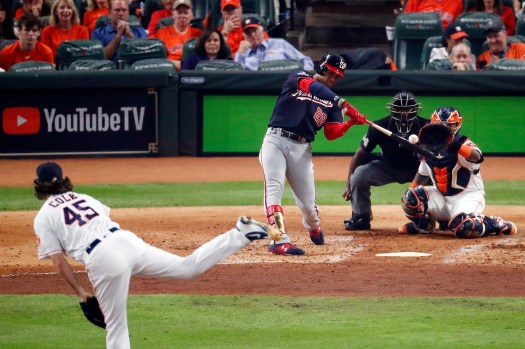 For months most of us have yearned for a bit of “normal.” A bit of the way things are supposed to be. The yearning has gotten us nowhere. But tonight, we’ll get to watch baseball. And complain about the umpiring, the announcing, the way-too-many strikeouts, whatever we want. What is more American than that?

Heck, the Yankees are even playing – they are the visiting team – and they are starting another multi-million dollar free agent pitcher, as has been their tradition since before ESPN televised every one of their games. Heck, last season Gerrit Cole was trying to beat the Nats in the World Series with the Astros. Tonight, he will try to beat them in the first game back.

But if that’s not enough for you, or you have to work late, there is always another game to watch. And there is little chance the Giants’ game against the Dodgers in Chavez Ravine will be rained out. Not in late July. That game will be on ESPN as well, though a 7:08 PDT start time seems a bit unrealistic, considering a three-hour game is a rarity these days.

The Dodgers have their own newly minted millionaire in Mookie Betts, who agreed to the richest contract in the game’s history yesterday. However, Los Angeles acquired Betts the old-fashioned way, trading prospects to an under-financed club to steal its superstar. There is no way Betts’ old team, the Boston Red Sox, could have afforded to keep him …

Wait, something about that last sentence that doesn’t seem right. No matter. He’s now playing in the place I grew up, and will be doing so for another decade or more, so take that Red Sox Nation.

• The Mariners don’t begin their season until Friday. They will be in the home of baseball’s best cheaters, the Houston Astros. I’m pretty confident Marco Gonzales won’t have to worry about someone pounding on a trashcan and tipping pitches. He just has to contend with one of the best lineups in the game.

That’s quite a challenge. But, really, who’s focused on that? It’s baseball and it will be on our TV. That’s enough. That’s about as normal as it’s going to get these days.

WSU: Theo Lawson complained a bit a few days ago about the exponential growth of award watch lists in recent years. He’s right. Every position, it seems, has an award and a watch list for said honor. Both Washington State’s punter and kicker were part of the watch lists for their respective positions, lists that were revealed yesterday. And Theo has a story on each. When is long snapper award’s watch list going to be revealed? I can’t wait. … Aron Baynes explained publicly what everyone knew privately: He’s been battling COVID-19. Theo has a story on the former WSU center speaking out about his dealings with the disease. … Around the Pac-12 and college sports, the conference office has been handling the virus mess pretty darn well. … All the changes to high school schedules will impact recruiting as well. … One of Oregon’s key players is not a player at all. … Utah’s philosophy about possible delays? If you can’t control it, don’t worry about it. … Workouts are tightly controlled at UCLA and other places these days. … In basketball news, Washington’s game in China is off.

Gonzaga: Their name is already on the building, so the McCarthey family can’t be bidding for more recognition from GU. But they got it anyway. Yesterday, the school announced another large financial gift from the McCartheys, though the amount was not revealed. Jim Meehan has more on their largesse in this story. The Washington Wizards are expecting big things from Rui Hachimura in the bubble. … Elsewhere in the WCC, Pacific’s Damon Stoudamire has been given a contract extension. … As a current BYU player reveals he is about to have shoulder surgery, a former one speaks out about racial justice.

Whitworth: The Northwest Conference has decided this fall isn’t the right time to be playing football, or other high-impact sports. They have been postponed to the spring. Dan Thompson has all the details in this story.

Preps: Football coaches have some clarity about what is ahead in Washington. That’s the positive aspect of the WIAA’s announcement Tuesday certain sports will not be played this fall. Dave Nichols talked with a couple local coaches yesterday to get their thoughts on the coronavirus-caused changes. … Dave also spent some time yesterday talking with Larry Weir about this development. Their conversation is a part of the latest Press Box podcast. … Washington isn’t the only state with sports issues in this time of coronavirus. Oregon is dealing with the timing as well – and with other issues.

Golf: The junior golf scene isn’t about to take the summer off. There was a district tournament earlier this week at Palouse Ridge in Pullman. Jim Meehan has the results.

Mariners: Our Ryan Collingwood spoke with a couple former major league pitchers who live in the area. They have something in common. A Barry Bonds home run. … The shortened season has added a twist to the M’s plans. … Tom Murphy has a broken bone in his foot. He’s out for a while. That’s a blow to the team and to him. … The M’s six-man rotation contains a pair of pitchers coming off Tommy John surgery.

Seahawks: Hey, the roster countdown continues. … Masks are now mandatory at NFL games. Fans in Seattle may have to wait awhile before they’ll be able to wear them at CenturyLink, however.

Hockey: The name of the Seattle NHL franchise is expected to be revealed this morning. The smart money seems to be on the Kraken, but that would just be stupid. Not the name, per se, but betting on what it is going to be.

• We will have a column in the newspaper tomorrow. It will deal with the Seattle Mariners and the start of their season. And we will mention fantasy baseball too. How’s that for a tease? Until later …