This time last year, Kathleen and Roland Lamarche were seeing live music and enjoying local wine on plenty of balmy summer afternoons. Now, it’s a rare treat to be able to enjoy practically anything outside their home.

On Wednesday evening, the Lamarches were two of around 50 patrons inside Barrister Winery on Railroad Avenue. Local blues legend Sammy Eubanks was playing on the venue’s small stage as widely spaced couples and groups of friends mingled through masks. Another 30 or so sat outside in the early summer sunshine as music drifted out.

“We’ve been mostly inside for the past two months,” Roland Lamarche said. “It’s so encouraging to see everyone out in the open. It’s really very invigorating for us.”

Barrister’s Wednesday at the Winery event has long been a summer favorite for locals, said co-owner and winemaker Greg Lipsker. But last night was the first time the winery had been able to do much of anything in its normal routine, since state and local restrictions to curb the spread of coronavirus shut them down for all except essential business. 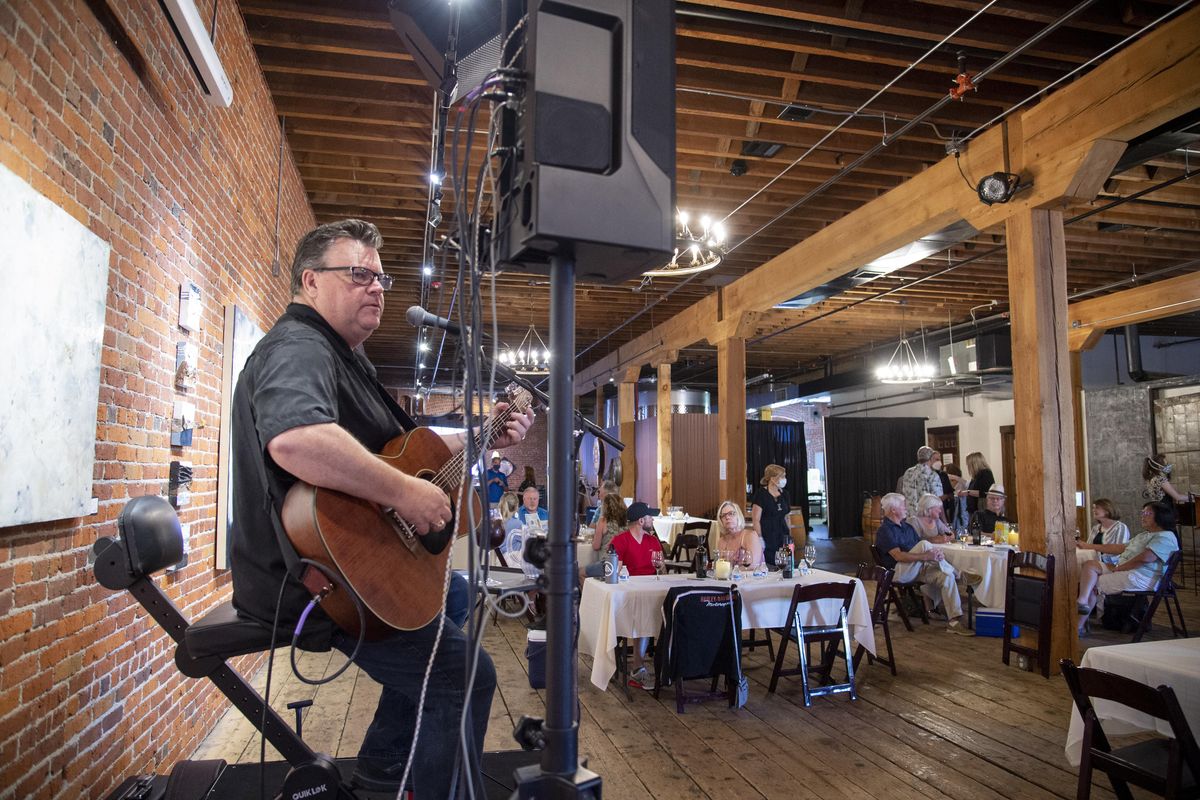 Longtime musician Sammy Eubanks belts out classic blues and pop songs from a small stage at the Barrister Winery in Spokane after the popular wine bar opened for a Wednesday night, June 3, 2020. “This is the first time I’ve performed outside of my house in two months,” Eubanks told the crowd. (Jesse Tinsley / The Spokesman-Review)

With Spokane County now gradually lifting many of those restrictions, Lipsker said he and co-owner Michael White had been excited to get Barrister’s summer schedule underway again. The winery is one of the first downtown venues to host a live music event since restrictions began loosening in recent weeks.

He said Wednesday’s event, along with all future ones for the time being, strictly required reservations to keep crowds at approved levels, and staff had carefully arranged tables to ensure each group maintained social distancing.

Jennifer Lamb, usually the manager of Barrister’s tasting room on Washington Street, said she had transferred to the winery’s main venue since the shutdown to help with fulfilling an uptick in wine orders from local grocery stores. She won’t be returning to her normal job just yet, but said she was happy to get another step closer with the venue’s reopening.

“I’ve definitely been that person who’s never leaving the house except for work,” Lamb said. “But we’ve missed our patrons here. We’re still being cautious, but I trust the guidelines we’re working under.”

Lainey and Denny LaRue, owners of LoLo Boutique on 2nd Street, sat as close to six feet as they could away from some friends across a table in the back of the venue. Since their store was shut down, they said they have been doing a lot of familiar quarantine activities, including endless Zoom calls, as well as repainting and reorganizing the boutique.

Lainey LaRue said they were remaining cautious due to some underlying health concerns of Denny’s, but she felt safer now coming out to do things like the Barrister event.

“We are still wearing masks, just to be respectful of everyone else regardless of what phase we’re on,” Denny LaRue said. “But we are looking forward to doing all the things we used to do.”

The Lamarches were having a blast. Both in their seventies, Roland Lamarche said they had remained extremely cautious throughout quarantine, with only nightly walks downtown to keep them going. But even across the six feet of social distance, Roland said simply being around other people was “beneficial to his soul.”

“This is our celebration,” Roland said.

His wife, Kathleen, expressed the same feelings of relief after a long period of isolation.

“We’re so happy to be free to come out, to feel safe and comfortable coming out,” Kathleen Lamarche said, tears welling in her eyes. “It’s an essential part of my being, of everyone’s being.”