A GRIP ON SPORTS • Though it doesn’t seem like it to those of us who mark the time with a sports-oriented calendar, it is Father’s Day. Which makes it mandatory we reminisce about out our father-related moments. It’s cathartic, believe me.

I’ve shared more than enough father-son moments in this space over the years, but most of them revolved around me as the son. Good times. It’s past time, however, to switch gears and describe some of the more memorable moments from the other side of the looking glass.

You know what I mean. When I was in the role of dad. Oh boy, let me tell you. Some of them aren’t going to earn me any statues. If they did, the plaque at the base should read something like “tried his best” and leave it at that. I knew I was going to be in trouble as a sports-loving parent when my eldest was less than a year. Holding him in my arms, getting him to fall asleep as I watched a basketball game, was easy. But keeping him asleep, when every few seconds something happened on the screen that made me want to throw his binky or blanket, that was the trick. Usually, the time holding Ty ended when I would explode at something, he would wake with a start and the waterworks – all different types – would start.

“Sorry, honey, he’s awake for some reason. And wants his mother. No, I have no idea why.”

That being said, here are five sports-related occasions over the years when I was extremely proud to be Tyler and Jack’s father: 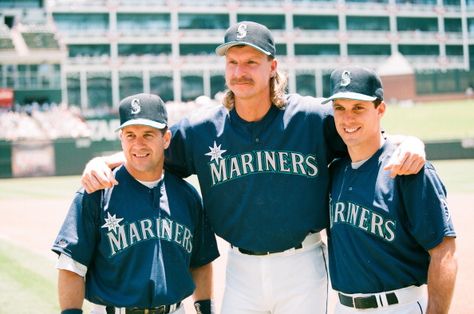 5. Mariner game, Kingdome era: I’ve shared this before. We have a family tradition at baseball games. Each of us picks a player in the M’s lineup. If that player hits a home run during the game, the family member who has him in the pool wins a souvenir. Jack, being the youngest, always had first pick. Turns out, he thought Edgar and Tino Martinez were brothers. (Didn’t know that salient fact until recently.) So he would pick the younger one, Tino. Tyler on this day took Edgar. Which caused some confusion. Edgar Martinez hit a home run. All Jack heard was “Martinez.” He thought he had won. He exploded with joy. When his brother informed him otherwise, waterworks – only one kind – erupted. Dad dealt with it the only way he knew how. By buying both souvenirs. Solomon-like parenting, right?

4. American Legion game, Colfax: To this day I consider myself blessed to have the time to coach my kids off-and-on. Even with the ethical problems it caused (see below) from time to time. This wasn’t one of those times. Tyler was playing for the Ferris High Legion team. I was an assistant coach, with the responsibility of coaching third base. Tyler was not fast. Actually, his name could serve as the antonym of fast. But here he was, late in a tie game, on second base with two outs. And his third base coach reminding him to find the outfielders, take a two-out lead, get a good secondary, anticipate the ball in the dirt. Lo and behold, the latter happened. And the ball skipped past the catcher. Tyler took off for third. The catcher couldn’t find the ball – the Colfax backstop was Safeco Field big – and Tyler was running as fast as he could. Hell with it, the third-base coach thought, just keep him going. Tyler never stopped. The catcher never found the ball. My son, despite being cursed with his dad’s wheels, scored the eventual winning-run. The head coach, Joe Everson, expresses his amazement to this day. To be honest, so do I. 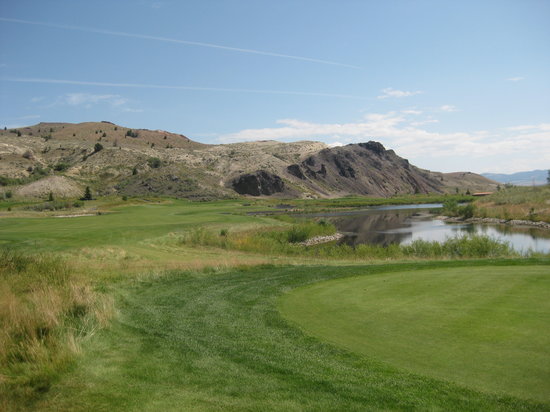 3. Golf course, Montana: Taking Jack to Montana State to start college was tough on Kim and I. Empty nest and all. So we made it a family affair. Tyler tagged along, dragging his golf clubs. On the way home from Bozeman, we stopped in Anaconda and played Jack Nicklaus’ Old Works Golf Course. It was nearly empty. Kim rode in the cart and Tyler and I took turns walking. It was an idyllic day. The reason why? The trash talking reached epic proportions. What, you’re surprised? Of course we trash talked. That’s part of golf, right? Getting into each other’s heads? Despite my obvious superiority in that regard, Tyler was still kicking my butt. Until we arrived at the 13th hole. A par 3, playing some 180 yards or so. I hit first. Pulled out a 5-wood, aimed left, away from water well off to the right and carved a hard fade onto the green. “Don’t bring the water into play,” I said, or something like it, as Tyler was pushing a broken tee into the ground. He looked up, laughed and said “water? No chance.” Of course, his 6-iron went dead right and landed mid-lake somewhere. The look he gave me will be with me always.

2. Basketball game, Chase Middle School: I’m not proud of this one. It is probably my least-favorite sports memory ever. But it also serves as a touchstone between myself and my eldest. He was in eighth grade. His AAU team was really good. I was proud to be the boys’ coach. We were playing a league game came against the Mead group, led by Adam Morrison. It was the core of what would become the Panthers’ state runner-up team four years later. They were undefeated. Tyler drove to the basket, mid-game, and came down on someone’s ankle. He didn’t get up. I came out, saw him writhing in pain and asked the same question coaches have asked since Roman times: “can you play?” He didn’t know. We helped him to the bench, made a sub and motioned to our friend, Tom Clift, to please come down and look at Ty’s ankle. He did, taped it up and told me he didn’t think he should play. What? He’s one of our best players. I walked down the bench, made it clear my thoughts on the matter, Tyler grimaced and said he would try. I put him back in. He could hardly move. His coach wasn’t happy. Either was his dad. I’m sure when I pulled him out, I said something snarky or gave him that “I’m disappointed” look. Typical. After the game, which we happened to win without our best shooting guard, Tyler’s mom took him for an X-ray. Yep, it was broken. Badly. The doctor told her Tyler was lucky. The tape job was so good, it served like a cast. Without it, he would have had to have surgery. As it was, he was out for weeks. Look, I know this to be true. If the same injury had happened to any other kid on our team, I never would have put him back in the game. Never. But my own son? Why in all that is holy did I do it? We’ll never know. But I do know, whenever we need a laugh, Tyler or I mention it. What an idiot I was. It’s a lesson I would model for my sons over and over throughout the years.

1. Baseball trips, various times and places: Kim and I bought into a Mariners season-ticket group when the boys were young. A weekend or two a year and a week in summer spent on the West Side, watching games and doing tourist things. The tickets at Safeco were great, hard down the left-field line, five rows above the hand-operated scoreboard. Part of what is Edgar’s Cantina today. I remember so many hours sitting, watching the boys try to catch a batting-practice home run. I would eat peanuts, do the Times’ crossword puzzle and thank the Lord for all He had given me. I miss those days. But that wasn’t the best part of the trips. Nope. The nights at the hotel. Those were the best. The boys swimming. Eating dinner. Fighting, as brothers do. Rambunctious. We had a ritual, though, that always settled them down and put them to sleep. I would tell stories. Some partially true, some completely pulled out of thin air. The Giant Slug of Clallam County was their favorite. It was basically the plot of every ‘50s sci-fi movie I watched as a kid, with radiation the main villain, but the stories were new to them. And put them to sleep. It’s those times I remember. The times of quiet after a day filled with noise. That’s when I really felt like a dad. A proud dad. Still feel that way. Always will.

WSU: Former Washington State star Klay Thompson has been practicing at full strength recently. … Around the Pac-12 and college sports, the newest member of Washington’s quarterback corps could have transferred to a school in which his place as a starter was guaranteed. Kevin Thomson didn’t. Why not? … Colorado has added an assistant football coach with a well-known last name. … Speaking of college football, will it be played in the fall? … UCLA’s players are set to return to campus. … Oregon has added another basketball transfer. It’s the Ducks’ way. … USC has rebuilt its roster again. It’s the Trojans’ way as well.

Gonzaga: Mark Few’s future is part of this college basketball question and answer piece in The Athletic.

Idaho: This will not be your usual fall college football season no matter what. As Peter Harriman tells us, the spring and summer have been nothing near normal, so how would anyone expect fall to be different? Paul Petrino certainly doesn’t. … No matter how this year plays out, quarterback Colton Richardson won’t be part of it. He’s sitting out the season.

Preps: Not sure we’ve had a prep-related eSports piece before. But we have one today. It’s from Dan Thompson and it begins with the story of Gonzaga Prep grad Jake Simpson before delving into the future of eSports for high schools.

Golf: Jim Meehan’s golf column this week takes us on a fast ride around the local course. Yep, it’s about electric scooters you can use as a cart these days. I can just envision myself playing as an 87-year-old man drives by on one. I will shake my fist, say “darn you, you Hell’s Angels” and play on. … This week’s PGA tournament at Hilton Head has come with some unique experiences. … No U.S. Open final round today. That’s messed with my head, sports-calendar-wise. Five years ago, the tournament was in the Pacific Northwest.

Mariners: Today is the perfect day for a documentary on Ken Griffey Jr. to debut on the MLB channel. His ties with his father are well-documented. But our Gene Warnick shares a tie with Griffey today that is also perfect for Father’s Day. It’s our first Out of Right Field column of the year. … The documentary is the subject of Larry Stone’s column today.

Horse racing: It was a surreal Belmont Stakes yesterday, as Tiz the Law won handily in front of no crowd and accompanied by little-to-no noise.

• If you ever run into one of my sons, just say this one compound word. Preserv-a-tray. They will bust up laughing. The story behind it is one I’m never sharing here. Until later …