The armed yahoo brigades that have shown up at Black Lives Matter demonstrations across the Inland Northwest have so far been little but absurd sideshows.

They peacocked around Spokane in their lightly used bulletproof vests, tac glasses and shiny rifles, while law enforcement worried publicly about antifa’s milk supplies. They lined up on Sherman Avenue in Coeur d’Alene, braced for the busloads of antifa bombers that never arrived.

They mustered in Sandpoint, called to action by a county commissioner. About 50 men who don’t get to man-dance publicly with their guns as much as they’d like followed the mostly teenage demonstrators across the Long Bridge and into town, where the phantom antifa did not await. 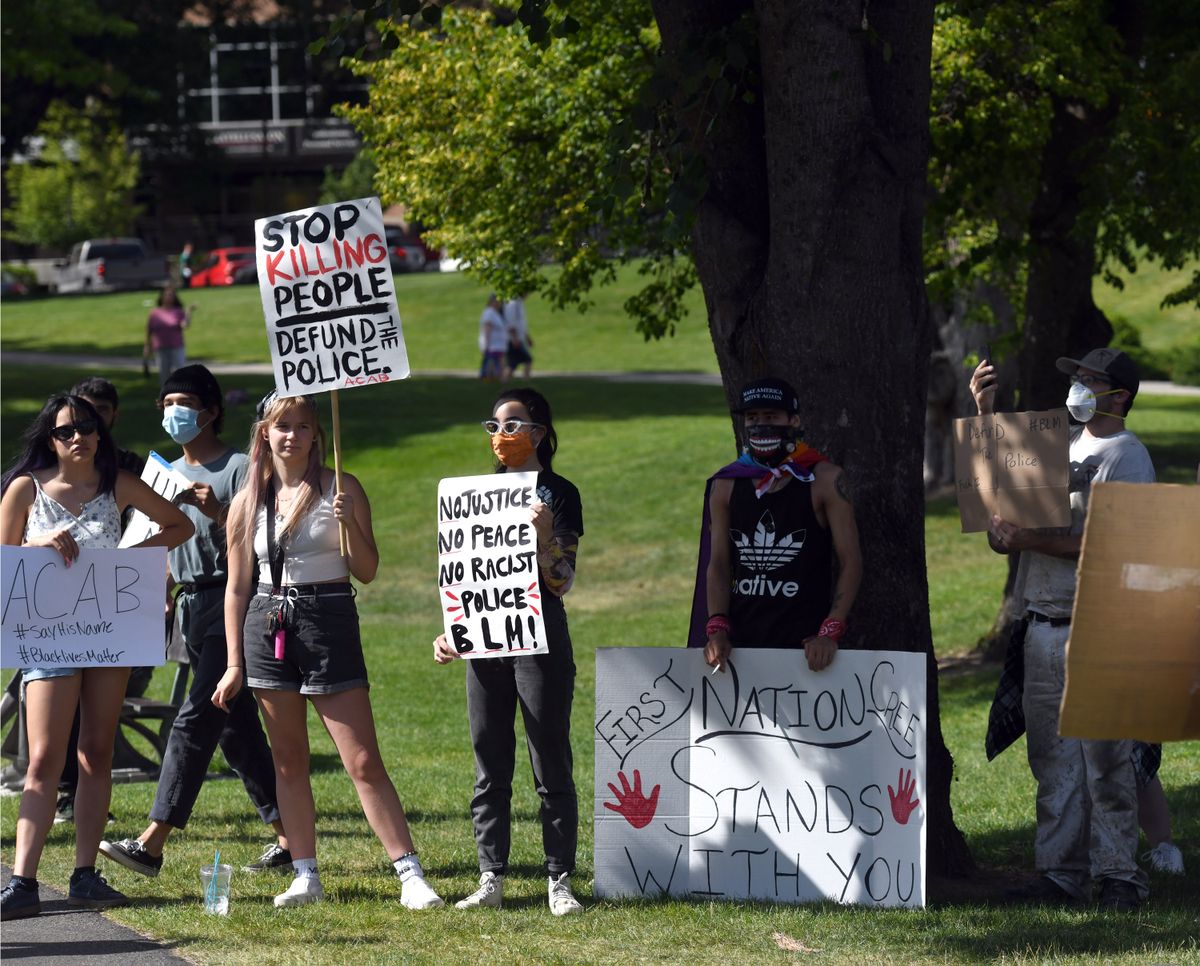 Protesters gather at McEuen Park during a defund the police protest in Coeur d’Alene on Tuesday, June 23, 2020. (Kathy Plonka/The Spokesman-Review)

All around the white, rural West, armed self-appointed militia dudes have risen up in opposition to the call for civil rights and police reform around the death of George Floyd, disrupting peaceful protests, glowering at people with cardboard signs, declaring themselves the defenders of America.

Some of them are more extremist than others, some more obviously bigoted, some more clearly linked to the most extreme submovements of the anti-government right and some just Second Amendment play-actors. But all were responding to a paranoid, conspiracy-fueled white blindness to what has been happening in this country, and what they believe they can do about it. The desire among some of them for civil strife on racist terms is palpable.

But a constitutional law project out of Georgetown Law School is challenging that idea, reaching out to cities large and small to point out that these militias – when they organize, coordinate and engage in a supposed law enforcement or military purpose – are violating well-established laws against private paramilitary action.

Communities that do not want them showing up can do more than complain.

The Institute for Constitutional Advocacy and Protection project of the Georgetown University Law Center sent a letter last week to the mayor of Sandpoint, Shelby Rognstad, and Bonner County Commissioner Dan McDonald.

McDonald sent out social media appeals for armed citizens to come to Sandpoint when BLM demonstrations were planned in early June. Rognstad, on the other hand, has been a vocal critic of the vigilantism on display by the militia types at the BLM demonstrations.He has also pressed for a citywide anti-hate campaign, Love Lives Here, that has, sadly if predictably, drawn opposition.

In the letter, ICAP legal director Mary B. McCord notes that private paramilitary activity is prohibited by several Idaho laws.

“We wanted to call this to your attention in light of Commissioner McDonald’s express request to the militia members to attend the protest, what appears to be Commissioner McDonald’s continued solicitation on Facebook of militia members to attend additional protests, and the suggestion by some Idaho officials that no state law prohibits such conduct,” McCord wrote in the letter.

“In addition, the potential remains for future confrontations between protesters and armed militia members as protest activity continues. As you know, such confrontations can lead to tension, the chilling of constitutionally protected speech and assembly, and, in some cases, violence and destruction of property.”

Neither Rognstad nor McDonald returned messages seeking comment this week. McCord said her goal in writing the letter was to let officials know they had legal authority they might not know they have, offer them pro bono legal assistance if they want it and to let the public know of these laws in case they want to urge their leaders to use them.

“People have a right to free expression,” she said in an interview this week. “They have a right to arm themselves … they don’t have a right to gather as militias. Gun rights advocates have been very effective in perpetuating a myth that the Second Amendment protects everything, including gathering as a militia.”

But laws in every state make clear that it doesn’t, she said.

McCord said Idaho’s constitution prohibits private paramilitary operating without state authority. A separate law bans “unorganized associations” from paramilitary activity, noting “(n)o body of men, other than the regularly organized national guard, the unorganized militia when called into service of the state, or of the United States … shall associate themselves together as a military company or organization, or parade in public with firearms in any city or town of this state.”

Another says only the governor may call a militia into service.

Such laws exist in all 50 states, ICAP says. Washington’s Constitution, for example, puts the government’s civil authority in charge of military action, as Idaho’s does. Similarly, state law says any “organized body” beyond the recognized state militia or U.S. armed forces “may not associate themselves together as a military company or organize or parade in public with firearms.”

Does that contradict the Second Amendment? The Supreme Court has said no, as recently as the landmark 2008 case that made clear gun ownership is an individual right, District of Columbia v. Heller. In Heller, a broad expansion of the individual right to bear arms, the court made it clear that the Second Amendment “does not prevent the prohibition of private paramilitary organizations.”

ICAP began developing this niche expertise following the violent Unite the Right rally in Charleston, South Carolina, which marked a new age for militarized, racist activism. The organization sued militia organizations on behalf of citizens and business owners in Charleston and won; the result was 23 individuals barred from returning to the city in groups or while armed, under the authority of state laws very much like Idaho’s.

McCord thinks that could be replicated elsewhere. The potential ramifications in the age of armed yahoo rallies are significant. We live in an era where the chief threat of domestic terrorism comes from within the ranks of anti-government self-styled militias. It’s not clear that our politicians and police leadership all accept this – swamped as they are with scary stories about antifa and the CHOP – but it’s true according to the threat assessments of federal investigators.

At the same time, we in the West regularly experience heavily armed public gatherings of armed far-right activists that are organized online, fueled by conspiracies and woven through with some extreme factions slavering for civil war.

When does that cross into paramilitary action? McCord said it happens when the gatherings are organized beforehand and coordinated on the ground, run by a central authority, involve the display of military or law enforcement insignia or group membership, and carry out a purpose that is the legally the purview of law enforcement or the military.

Many private paramilitary organizations make it easy to identify their illegal behavior, she said – by identifying themselves as militias.

McCord realizes it’s an uphill battle to persuade local leaders – and especially conservatives who support and encourage the brigades – to take on this battle, at a moment when yahoos bring guns even to protest coronavirus restrictions. The rallies are ubiquitous now, as is the conventional thinking there is nothing that can be done about it.

Whatever happens or doesn’t happen in Bonner County, the ICAP project tells us we should think again. Communities that are tired of the yahoo brigades can do more than complain.