About 70 people gathered outside Spokane City Hall on Monday to demand that the City Council reject a controversial police contract they say would hinder civilian oversight.

The council rejected the contract Monday evening in a unanimous vote. The proposed deal had gone through three and a half years of negotiations between the Spokane Police Guild and the administrations of Mayor Nadine Woodward and her predecessor, David Condon.

The Spokane City Council resoundingly shot down a controversial new contract with the union that represents Spokane police officers on Monday. | Read more

Council members have said the proposed contract, like the one before it, does not honor the full authority granted to the Spokane police ombudsman, the department’s civilian watchdog, under a city charter amendment approved by voters in 2013.

“Let us be clear: Any contract that has that language related to the ombudsman or the ombudsman commission is absolutely unacceptable. The matter of police accountability is a conversation between the city and the people – not the city and the guild,” Kurtis Robinson, president of the Spokane chapter of the NAACP, told the crowd outside City Hall. 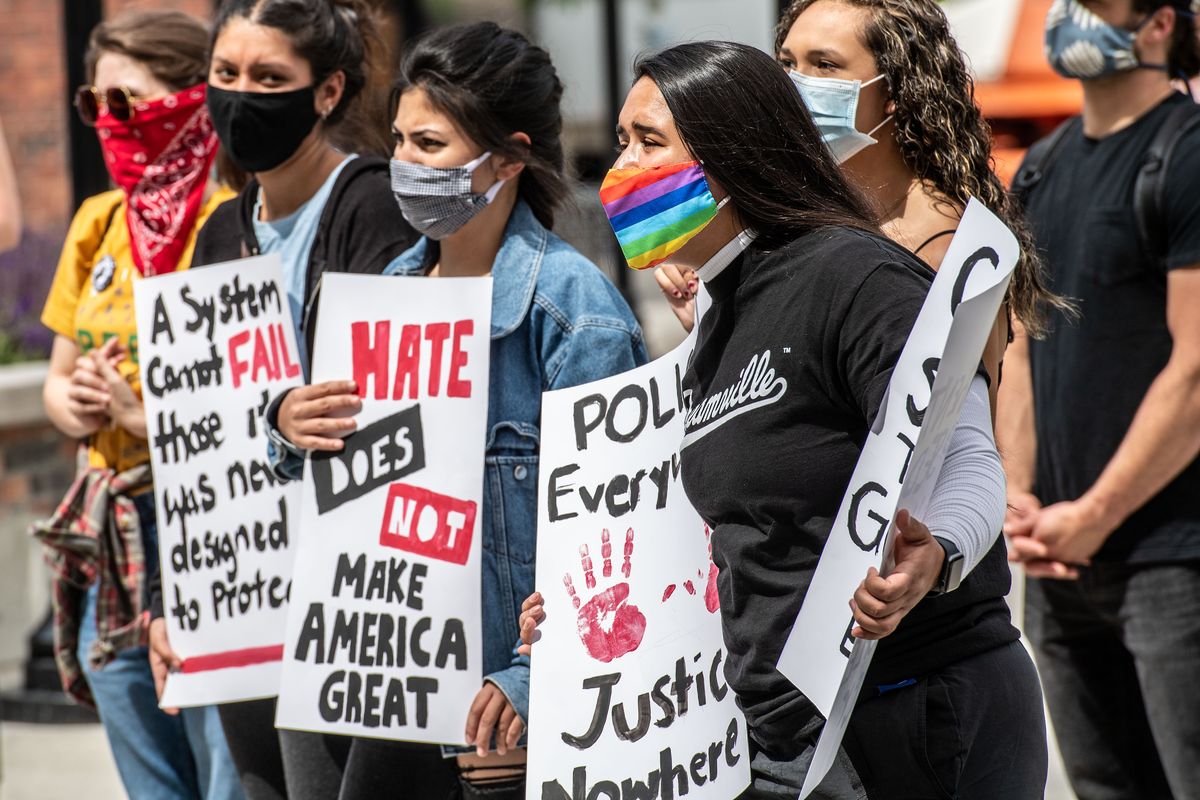 “You cannot gun us down at will,” Robinson said. “You cannot walk away with no accountability.”

Dustin Jolly, an organizer of the protest, urged attendees to make their voices heard during the public comment period of the council meeting.

Several counterprotesters, including one local member of a far-right group called the Proud Boys, stood across the street filming the larger crowd. One held a sign reading “Love the police.”

“The contract, as proposed, will lock in multiple improvements and immediately start work on making our process even better,” Woodward said in the statement.

She noted the contract would, among other things, expand the ombudsman’s authority to full- and part-time members of the ombudsman’s staff, and allow ombudsman staff to attend police department meetings to review uses of force and vehicle collisions.

“Spokane citizens want to continue advancing the oversight process,” Woodward said in her statement. “Anything short of confirming the contract leaves the community with no improvements to oversight, an open bargaining process that severely limits any further immediate reform discussion, and uncertainty that is very likely to cost taxpayers more to reach the same enhanced oversight agreement or revert back to existing oversight.”

Another activist outside City Hall, Lacrecia Hill, told the crowd she had grown tired of calling for police reforms.

“We’re tired of walking in the streets,” she continued. “We should be home with our families. We shouldn’t have to come out here and sacrifice our safety and our well-being and our emotional health so we can say we want a safer, healthier, happier community. And that’s all we’re asking.”