A GRIP ON SPORTS • We wondered if Saturday could top all the excitement we experienced on Friday. After a day of sports on all levels, Saturday wins in a walk. Only the heartless Russian judge gave Friday a higher score.

• Man, where to begin? There are so many choices. I guess we’ll start with Mark Few, Senior Night and a moving moment.

On an evening in which Rui Hachimura made a surprise visit so he could take part in what would have been his senior ceremonies, his appearance wasn’t the most emotional. Nope, that honor was reserved for Mac Graff. A manager.

OK, Graff, whose family is Pasco sports royalty, isn’t just “a manager,” as if there is such a thing. He’s a senor manager who has been tooling around McCarthey for the past few years in a wheelchair. It’s his transportation since a hunting accident as high schooler took the use of his legs.

Except Saturday night. He decided to use a walker and some braces and walk out for his recognition.

“Back in high school, I would walk around some and the community there was so supportive,” he told John Blanchette. “The community of Spokane has been the same way, but they’d never seen it. I thought, why not? It’s the biggest stage in Spokane.”

And on the biggest stage, he was the biggest star. Heck, even the Gonzaga players, gearing up for the showdown with rival Saint Mary’s, teared up some.

“That was about as powerful a moment as I’ve seen in this building,” Few said and he’s seen more than a few.

• By the way, the Zags went on to defeat the Gaels 86-76 in a game in which a 3-minute stretch early in the second half was the deciding factor.

If you want more on the game, skip down to the Gonzaga section. Just remember to come back. We have more to say.

• Everything broke Whitworth’s way the past week or so. The Pirates defeated Whitman on the Blues’ court, which basically clinched the Northwest Conference title. And, despite a loss at Linfield, they hosted Thursday night and won the first-round game. But looming in last night’s finals were the Blues again, a team that had already won this season at the Fieldhouse.

Make it 2-0. Whitman surged past the Pirates in the second half and wrapped the conference’s automatic NCAA Division III Tournament bid 86-80. Now Whitworth, ranked fourth in the West Region heading in, has little hope of an at-large berth. That’s what past history has taught us. And first-year coach Damon Jablonski knows it.

“We’ll hold out some hope, but I think it’s pretty unlikely at this point,” he told Dan Thompson last night. “But there is still a chance. We’ll wake up Monday morning and pray that we get an opportunity, but we’ll be prepared that we won’t.”

• We took off in the early afternoon yesterday and attended a high school playoff game. Sat – actually, we stood against a wall so we could see over the student section – and watched the St. George’s boys rally past Onalaska in the 2B ranks.

Each level of basketball, from youth to the NBA, has its allure, but there is just something endearing about watching kids play what could be their final game ever. The game yesterday wasn’t that, actually, as both teams were already in next week’s State 2B Tournament at the Arena, but it was close.

And the players from both teams played like it.

If you get a chance to spend some time next week at one of the three venues – the Tacoma Dome, the Yakima SunDome and the Spokane Arena – do it.

Gonzaga: Being it was the final game of the regular season, we have our usual in-depth report and a bit more. Jim Meehan starts it off with his game analysis, the keys to the victory and a story on Hachimura’s surprise visit. … John has his Senior Night column. … Tyler Tjomsland covers everything from the pregame ceremonies, the game and the postgame speeches from the senior players, in his photo gallery. … The folks in the office have the usual complete recap with highlights. … We chipped in with the TV Take, which covers a lot of the little things the broadcast caught – and one it missed. … The women kept their hope alive of hosting the first rounds of the NCAA Tournament with a 56-42 win at Portland. Jim Allen has a story on the defensive battle. … The baseball team won in Alabama. … Elsewhere in the WCC, Portland lost to Santa Clara and finished the regular season 1-15. … Yoeli Childs had a career game as BYU won at Pepperdine and assured itself of the WCC's second seed. The Cougars join Gonzaga with a bye until the semifinals. … Pacific is playing well and capped off the regular season with a win at San Diego. 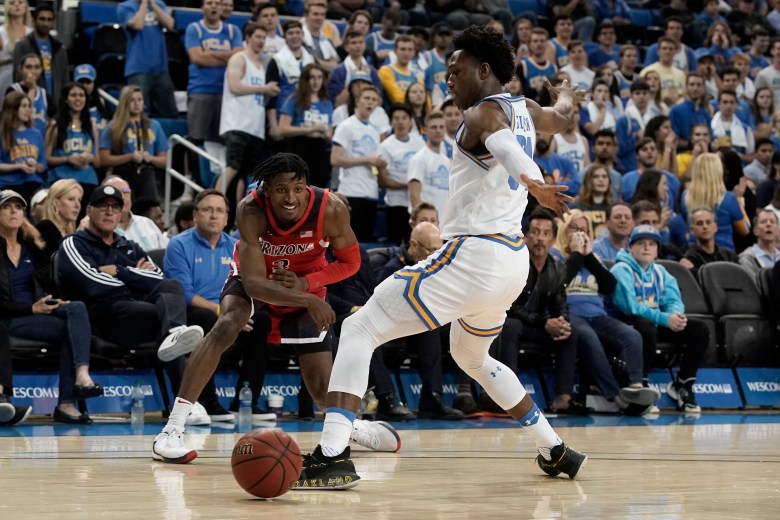 WSU: Around the Pac-12, yes, UCLA is in first place. The Bruins stayed hot, using a late surge to get past visiting Arizona. No one was hotter last night than UA coach Sean Miller, however, who was ejected in the second half. … Utah lost every Pac-12 road game, including last at California. … USC won a game it had to win, defeating Arizona State. … Washington is still searching for consistency – and it's March. … Colorado will try to get back on track against Stanford. … In football news, Colorado hired another assistant. It's his decisions in this area which may determine Karl Dorrell's legacy.

EWU: The Eagles seem to be peaking at the right time. They fought off host Northern Colorado and won a tough one in Greeley. That keeps Eastern tied with Montana atop the Big Sky standings, but the Grizzlies own the tiebreaker due to their two wins over EWU. … Elsewhere in the Big Sky, Portland State handed Weber State a defeat in Ogden. … Montana held off Sacramento State's frantic rally. … Montana State also won on the road, defeating Northern Arizona.

Whitworth: As we mentioned above, Dan Thompson was in the Fieldhouse and he has this coverage of the Pirates’ loss.

Preps: Dave Nichols was at University High for 4A action yesterday and he has a story on Central Valley’s win over Federal Way. … Dave also put together a roundup of all the local matchups next week at the State tournaments. … We can pass along roundups from boys and girls action not only from outside the area but also from the smaller schools. … Post Falls won its fifth Idaho 5A State wrestling title in six years. … Former Shadle Park High runner Nick Hauger had a top-10 finish in an international event. That’s the first subject covered in our weekly local briefs, but not the last.

Chiefs: Thanks to two late Ty Smith goals, Spokane rallied to tie Tri-City in regulation at the Arena. The Chiefs went on to win in a shootout.

Mariners: The M's lost yesterday and we got news of a minor injury.

Seahawks: The draft's depth at three position groups (running back, receiver and tackle) should be good for the Hawks.

Sounders: Seattle begins defense of its MLS title today at home, hoping for back-to-back championships – and more respect. … The Sounders are monitoring the coronavirus outbreak but it should affect today's match.

• A quick heads up. We are taking a personal day tomorrow. Nothing bad. Three S-R employees (one of which is related to me since childhood) asked me nicely to play golf with them. In a moment of extreme weakness – stupidity? – I said yes. It is my first round of the year. Anyway, they are starting at nine a.m. on a course that is an hour from my home. Thus the need for a day off. You can get by for one day, right? Consider it a mental health boost for your favorite daily columnist. Until I lose it on the 14th hole after my 13th consecutive three-putt. Until later …