By Dan Thompson For The Spokesman-Review

Throughout the season, the St. George’s Dragons endured stretches in which they couldn’t seem to make shots.

Wednesday afternoon at the Arena was a bad time and place for another one.

The Dragons hit just 8 of 30 field-goal attempts after halftime and lost 56-47 to defending State 2B champion Tri-Cities Prep in the tournament’s elimination round.

“We just couldn’t get a shot to fall in the second half,” said St. George’s coach Cliff Berdar. “We did the stuff we wanted to, we got the looks we wanted to. We just unfortunately could not make a shot.”

The Jaguars had no such troubles. They shot 55% in the second half and finished 20 of 50 from the field overall.

Tri-Cities Prep led 23-22 at halftime and widened the gap to 35-28 midway through the third quarter. After scoring just two points in the first half, junior guard Mckenna Martinez hit four shots during that 4-minute stretch.

Martinez scored 11 points in the third and finished the game with 20 points on 7-of-16 shooting and 6 of 12 at the free-throw line. She also had five assists.

“Our plan going into the whole thing was we were gonna rotate bodies on her, give her different looks,” Berdar said of Martinez. “Very rarely do you see one girl able to really change a game as much as somebody like her, but she’s so fast, and she’s unselfish, too.” 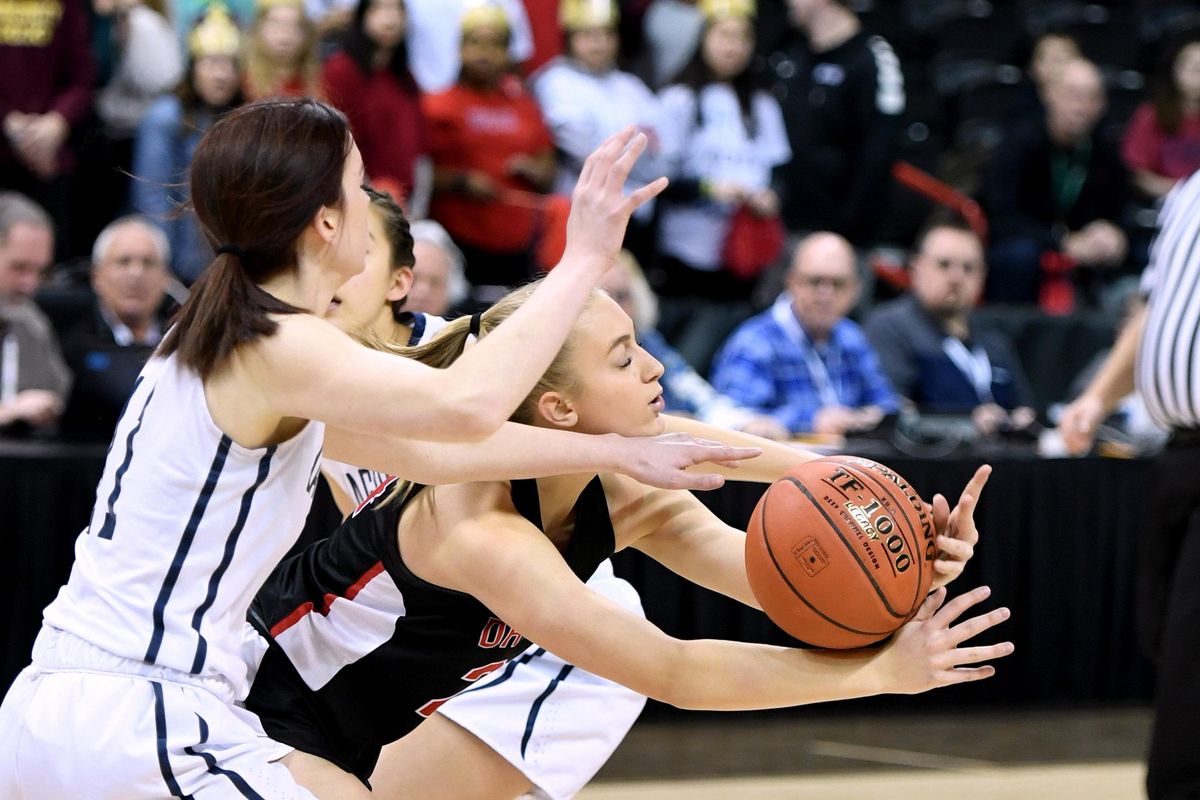 St. Georges guard Cambrie Rickard (in black) tries to keep the control of the ball as Tri-Cities center Emily Dickson reaches in during a State 2b basketball game, Wed., March 4, 2020, in the Spokane Arena. (Colin Mulvany / The Spokesman-Review)

Late in the third quarter the Dragons pulled within three points on two occasions, and with 3:56 left in the fourth quarter they pulled back within four (45-41).

But St. George’s couldn’t string together a significant run to get any closer. Freshman Annika Bergquist grabbed a game-high 13 rebounds to go with 14 points. Junior Cambrie Rickard led the Dragons with 16 points and hit 5 of 20 field-goal attempts.

Tri-Cities Prep also got 12 points each from seniors Emily Dickson and Alyssa Monteon, who hit 4 of 5 3-point shots.

Andee Nelson led Mossyrock with 20 points. Columbia shot 20 for 26 from the free-throw line, which helped offset its 30% shooting from the floor.