Steve Lympus, lead pastor at Shadle Presbyterian Church in Spokane, realized after last Sunday’s worship service that it might be his congregation’s last for a while as the coronavirus spreads across Washington.

The service was bittersweet. But then, just a few days later, one of the church’s elders had an idea.

“He said, ‘Hey, Steve, what if instead of driving through Taco Bell to get your Crunchwrap Supreme, you go and you get drive-thru Jesus,’ ” Lympus recounted Sunday morning.

The drive-in church was born. 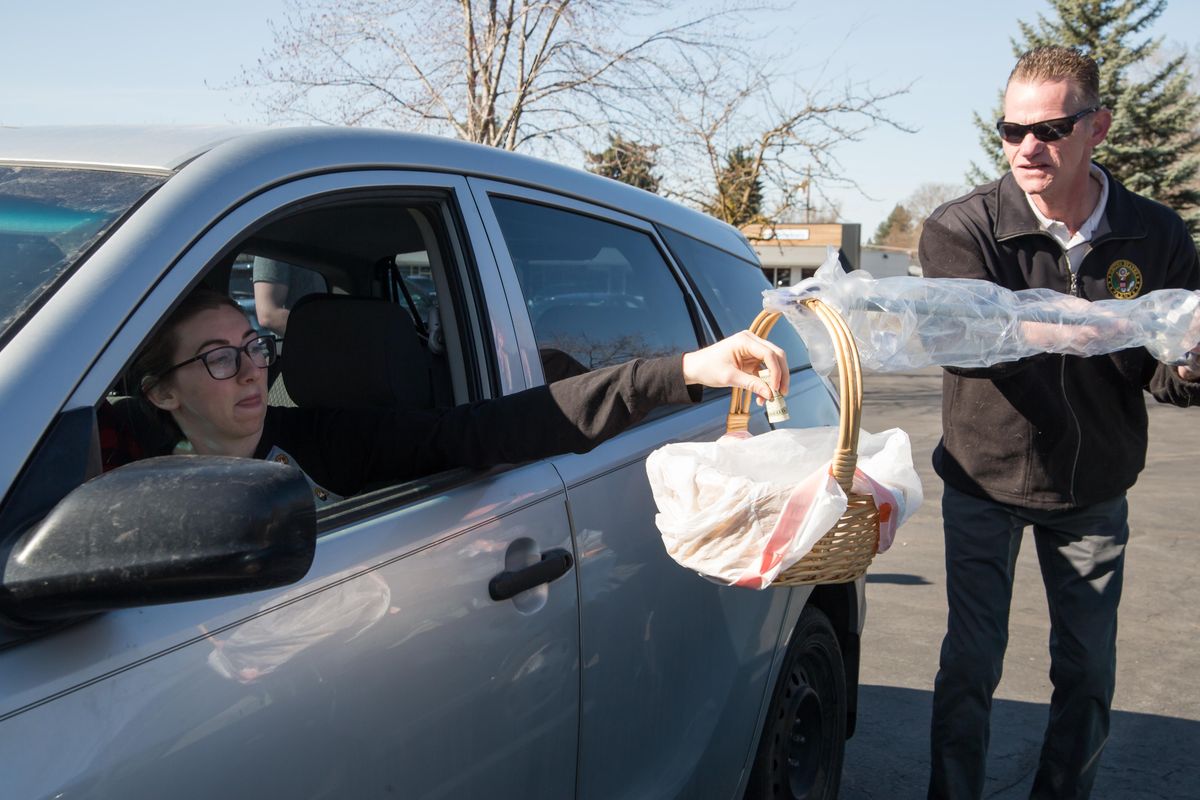 Courtney Durrant drops money into the collection basket, without touching the basket, handled by Craig Rudder during Shadle Park Presbyterian Church’s “Drive-In Worship” session in the parking lot of the church on Sunday, March 22, 2020 in Spokane, Wash. Due to the state ban on all gatherings of 10 people or more to prevent the spread of coronavirus, regular church services were cancelled and replaced with the creative solution, which involved parishioners tuning into 87.7 FM and taking prepackaged communions in their cars. (Libby Kamrowski / The Spokesman-Review)

Lympus and church leadership decided they would get a small FM transmitter, box up the supplies for communion and hold church drive-in-style just a few days later.

“We’ve been nourishing people spiritually and physically for decades, and we just had to figure out a way to still do that today,” Lympus said.

The church had never live-streamed services before Sunday, instead focusing on traditional in-person fellowship and creating a gathering place for the church community, Lympus said. He and the church’s musicians delivered the service into the camera of a phone mounted on a tripod in the sanctuary, which was then broadcast over Facebook.

Eileen Wilmot, church office manager, has attended Shadle Presbyterian at the corner of Rowan Avenue and Alberta Street for 40 years.

“I thought it was wonderful,” Wilmot said of the drive-in-service idea.

Wilmot has been staying home and keeping busy with cooking and baking.

“My hands are so clean I could eat off them,” she joked.

Wilmot sat in her car Sunday morning and passed a Tupperware of homemade enchilada soup with a long pincher tool to her friend Patty Book.

Book was sitting in the passenger seat of her car with her husband and dog, Zoe, ready to listen to the upcoming sermon.

“It’s so different, yet I think it’s a great thing to have happen,” Book said of the service.

A retiree, Book has been spending a lot more time at home, self-isolating to avoid exposure to COVID-19.

“I think everybody is starting to feel it,” she said of staying home all the time.

“Honk if you can hear me,” said Lympus as the service started.

About 40 cars were parked in the church parking lot with their radios tuned to 87.7 FM.

“Keep those CDC guidelines in place,” Lympus reminded people as he began his sermon.

The drive-in service provided a chance for the congregation to feel a semblance of normalcy while most businesses are closed and many people are self-isolating, Lympus said.

He did make a few changes to the already unconventional service. Along with sanitary communion supplies, volunteers passed out coloring pages and play dough for kids to use during the service. Lympus also kept his sermon rather short.

The entire service lasted about an hour.

For Tamarra Harris, heading to church was an exciting way to get her 5- and 9-year-old daughters out of the house.

“I think it’s easier for them than for me,” Harris said of staying home all the time with children.

Harris said the girls were thrilled to be able to go somewhere even if they had to stay in the car. “When they got their little treats, they were so excited,” Harris said. Volunteers distributed kids’ activities with long claws to reduce physical contact.

After the service, people with specific prayer requests participated in a “park and prayer” where church leaders prayed for them just outside their car window. Attendees could also pop their trunk and receive a frozen meal for the week ahead.

Gail Partridge, a church member, knows a thing or two about feeding people. Before the pandemic, Partridge was a “sample lady” at Costco. She has been furloughed.

While the pandemic has been difficult, Partridge said she feels it is a chance “reawake the kindness in us.”

Partridge, who lives alone, said she has been taking walks and visiting her grandkids by heading to their house and talking through the window.

Two of her grandsons had birthdays the last couple of weeks and not being able to celebrate was hard on them, she said.

Being able to gain emotional support through church is something Partridge said she and others definitely need during this difficult time, a message lead worshipper Terry Echegoyen emphasized during the service.

“Even though we are socially distant, we are not spiritually distant,” Echegoyen said before leading the church in song.