A GRIP ON SPORTS • There are many times even in the busiest of years Gonzaga’s signing of nonconference matchups dominate a news cycle. But yesterday’s twin notices of future games hit really hard, considering the competition.

• If Jim Meehan had reported the news Zags had agreed to a home-and-home with Texas on Saturday, we probably would have uttered an “oh boy” and taken notice. But when Jim followed that up later in the evening with a tweet about a home-and-home with Kansas, one of college basketball’s traditional blue bloods, it ensured we would be delving deep into the memory banks this morning.

Look, the days when Mark Few would have to cajole traditional powers to face his Bulldogs, let alone travel to the Northwest, are long gone. The Zags have reached a level in college hoops that makes it a given such schools are willing to not only play Gonzaga, but play them in the Kennel. Last year’s visit by North Carolina made that obvious.

Wilt’s school. James Naismith, the guy who invented the freaking game, coached there. So did Phog Allen. Danny Manning and the Miracles won a national title for Larry Brown there. If there is a troika of historical college basketball significance, Kansas is in it, along with UCLA and the Tar Heels. In a few years – Meehan reports the home-and-home series will start in Lawrence in Dec. 2022 and finish in Spokane the next year – two of those three will have played in McCarthey.

And it got me to thinking of great Gonzaga nonconference games we watched in the past. A lot of them, actually, in the past 40 years. So many, it was hard to winnow them down to my five favorite ones. But that’s what we did this morning. We share them with you. Your experiences may vary, but these are mine, in chronological order. By the way, in case you are wondering, these are all nonconference, regular-season matchups. NCAA games are their own animal. 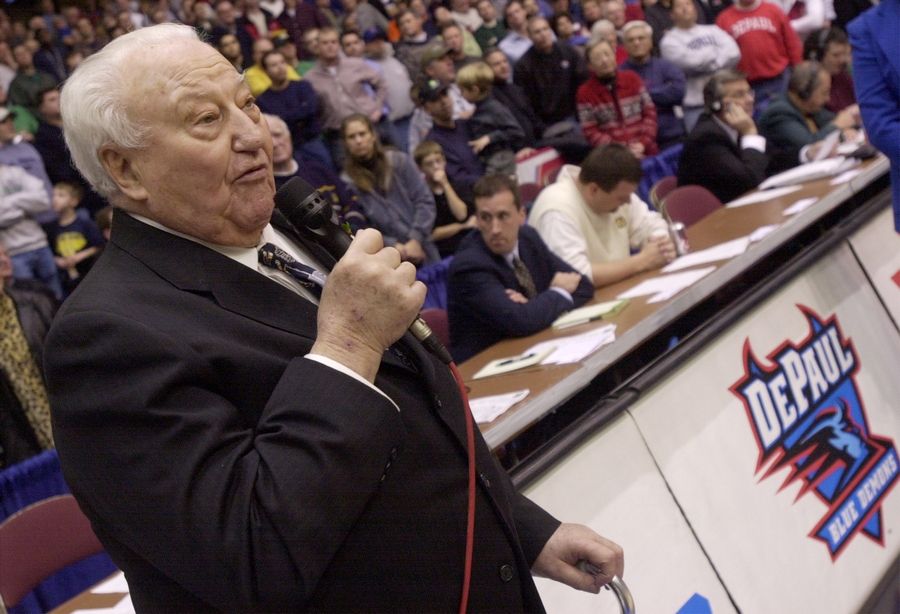 Jan. 10, 1983 – Gonzaga 49, DePaul 48: This might have been the first time I remember hearing about the Bulldogs. In a basketball sense. Steve Hertz, who had coached baseball at GU, left in 1979 to coach UC Irvine, where I had played and then worked as an assistant in the sports information office. So there was a connection. I remember sitting in the little TV room in our Fullerton house, watching John Stockton carve up a Blue Demons team as legendary coach Ray Meyer looked on. It wasn’t the Zags of today playing. Then it was DePaul that was national power. The Rosemont Horizon had become their home base because the Demons had outgrown the on-campus facility where George Mikan had blossomed. And the crowd was stunned when Dave Clements rebounded a miss three seconds left, put in back in and gave the Bulldogs the one-point victory. It was the best nonconference win of coach Jay Hillock’s GU tenure.

Dec. 21, 1993 – Gonzaga 76, Idaho 69: We were sitting in the upper reaches of the Charlotte Martin Centre that night, hoping to see Dan Fitzgerald’s flex offense befuddle the Vandals. It did. But as Fitz said after, it was a game that matched a howitzer with some pop guns. The howitzer was the Vandals’ Orlando Lightfoot who scored 50 points despite sitting for 10 minutes in the first half with foul trouble. The pop guns included Jeff Brown, the Mead High graduate who had transferred back to Gonzaga from Washington. I remember one thing clearly about this game. My eldest son sat and watched the pregame warmups with me because he liked to see how close to halfcourt John Rillie could be when he made shots. It was like watching Steph Curry warmup these days. Rillie’s long-range bombs earned a lot of oohs and aaaws from the 9-year-old crowd.

Nov. 22, 2005 – Gonzaga 109, Michigan State 106 (3 OTs): This game is on everyone’s list. They remember it as the Adam Morrison game. Why not? His 43 points led the Zags to the triple-overtime win in the semifinals of the Maui Classic. It was quite probably the greatest single-game performance in GU history, especially considering it came against a Tom Izzo-coached team with a great defender, Maurice Ager, hanging on Morrison for most of the 55 minutes.

Dec. 5, 2007 – WSU 51, Gonzaga 47: This was the best of Tony Bennett’s teams at WSU. It wasn’t Few’s best team, but the Zags, like the Cougars, were ranked. The Bulldogs were also coming off back-to-back nonconference wins over St. Joseph’s (in Philadelphia) and Connecticut (in Boston). And they were at home. But the Zags wouldn’t be able to solve the puzzle of Washington State’s defense, scoring the fewest points in the Few era. And yet the game wasn’t decided until Taylor Rochestie nailed a 3-pointer with 28.6 seconds remaining. Maybe someday Bennett will bring his Virginia team into the Kennel and we will see another matchup of styles unparalleled in college hoops.

Nov. 24, 2017 – Florida 111, Gonzaga 105 (2 OTs): The game above was a contrast in styles. This one, at the PK80 Tournament in Portland, pitted two teams wanting to play the same way, going back-and-forth until one finally earned enough breaks to win. Heck, GU even calls its ball-screen continuity offense “Florida” because it dates back to former Gator coach Billy Donovan’s two national title teams. Johnathan Williams had his best scoring game as a Zag, making 16 of 22 shots en route to 39 points. But it was the Gators’ Jalen Hudson who played the Morrison role, scoring 31 points after halftime and lifting Florida to the tournament finals.

WSU: We want you to read every story we link. That’s why we link them. But we especially want you to read Theo Lawson’s story today on Bryce Beekman. In this time of fear and loss all around us, Beekman’s recent death has seemed a bit lost in the crunch of day-to-day existence. It shouldn’t be. His friends won’t forget him, that’s for sure. … Theo also finishes his three-part series on Washington State basketball, looking ahead in this final segment. … Around the Pac-12, the Boulder newspaper is highlighting every Colorado basketball player. We are picking our spots to link them, but Evan Battey is worth it. … Arizona’s three freshmen are probably all going to declare for the NBA draft. … A former Wildcat assistant is coaching in a travel program that has sent a lot of players to Tucson. … USC received a commitment from a four-star running back.

Gonzaga: We linked Jim’s two stories in the beginning of the column, but we link them again here in case you skipped over my shouldn’t-be-missed thoughts. (By the way, if you did, for shame.) Jim has a story on the Texas games and another on the Kansas ones.

EWU: Pro days have helped Eastern football players make impressions on NFL scouts for years. But there won’t be one in 2020. Ryan Collingwood looks at how that might impact the careers of graduating Eagle seniors. … Elsewhere in the Big Sky, Northern Arizona did well in hoops this season and that earned the Lumberjacks’ interim coach the job on a full-time basis.

Seahawks: What type of player is cornerback Quinton Dunbar? He might be really good.

• My memory of Gonzaga basketball reaches back a long way. So many of the great games the Zags have played have been jumbled in my head. But the ones I pointed out this morning stand out, each for a reason. I’m sure you have ones that stand out to you as well. Make up your list. I’m guessing only one or two games overlap. Until later …