On this date 110 years ago, Glacier National Park was created in Montana, becoming the nation’s 10th national park.

Glacier National Park owes its existence to the Great Northern Railway. Railway executives pushed a plan to declare the scenic area as a vacation destination. Congress designated the land as a forest preserve in 1897 and voted to make it a national park in 1910. President William Taft signed the bill into law on May 18, 1910.

The railway went on to build a number of chalets and a lodge in order to house tourists. Several of these are now national historic landmarks. The Going-to-the-Sun Road, which bisects the park, was built in 1932. In the 1930s, the Civilian Conservation Corps built trails, campgrounds and other facilities. In 2018, nearly 3 million people visited Glacier National Park.

Yes, there are still glaciers at Glacier National Park – but certainly not as many as there used to be. There were about 150 glaciers in the park in the mid 1800s. By 2010, that had been reduced to only 37 – but 25 of those were at least 25 acres in size. Experts expect the glaciers to stick around at least another 10 years.

The park contains a dozen large lakes and about 700 smaller ones – most of them in small depressions called cirques that were created by the erosion of glaciers. Some of the streams run a milky white, due to glacial silt suspended in the water. There are about 200 waterfalls throughout the park.

Other national parks and historic sites in the region

Right now, all National Parks properties are closed – much like the rest of the country – due to the coronavirus. But once everything opens back up and sunny skies beckon, you’re going to want fun stuff to do with your family, right?

The Pacific Northwest certainly has no shortage of breathtaking scenery or historically noteworthy places to visit. Here are 10 national parks or other federal sites, all within 300 (or so) miles from downtown Spokane. 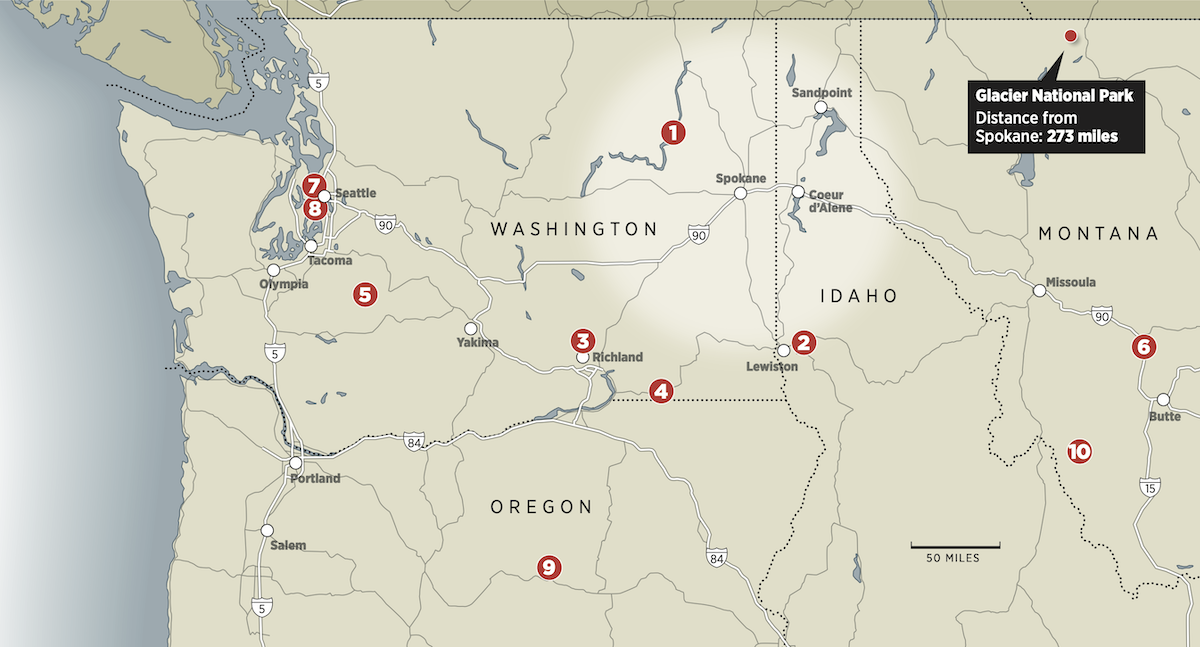 A 130-mile long lake formed by the Grand Coulee Dam.

Commemorates the Native American Nez Perce tribe and their way of life. Actually consists of 38 sites over four states.

One of three national parks devoted to the history of the creation of the atomic bomb in 1945. The other two are in New Mexico and in Tennessee.

Activities: Tour the site where plutonium fuel for atomic weapons was processed.

Site along the Oregon trail where missionaries Dr. Marcus Whitman, his wife and 11 others were killed by American Indians in 1847.

Activities: In addition to the monument, there is a visitors center and a museum.

Activities: Sightseeing, nature watching. About 10,000 people attempt to climb Mount Rainier every year. About 50% make it to the top.

Commemorates the cattle industry of the 1800s in the former headquarters of a 10 million acre cattle empire.

Activities: A living history museum with an operating ranch, blacksmith shop and other 19th-century activities.

Celebrates the gold rush that revived Seattle after a fire and economic depression.

Activities: Interpretive history museum located in a hotel where prospectors outfitted themselves before setting out for Alaska.

Sites where U.S. Army soldiers and the Nez Perce tribe clashed in 1877, where at least 130 died. The battlefield is part of the Nez Perce National Historical Park.

Activities: Tour the battlefields, hear rangers describe the history of the site.