A GRIP ON SPORTS • OK, who turned up the heat? Look, when we are running around complaining about the cold, that doesn’t mean we want it to be in the 80s. Or, god forbid, the 90s. Unless, of course, baseball is being played. And that’s not happening right now.

• Is there anything better than sitting under a shady tree, cold drink in hand and a baseball game on the radio? I have these vivid memories of Dave Niehaus raving about a Ken Griffey Jr. catch as I nearly fall asleep in the backyard. Of all those things, the only one that can happen right now is the falling-asleep-in-the-backyard part. 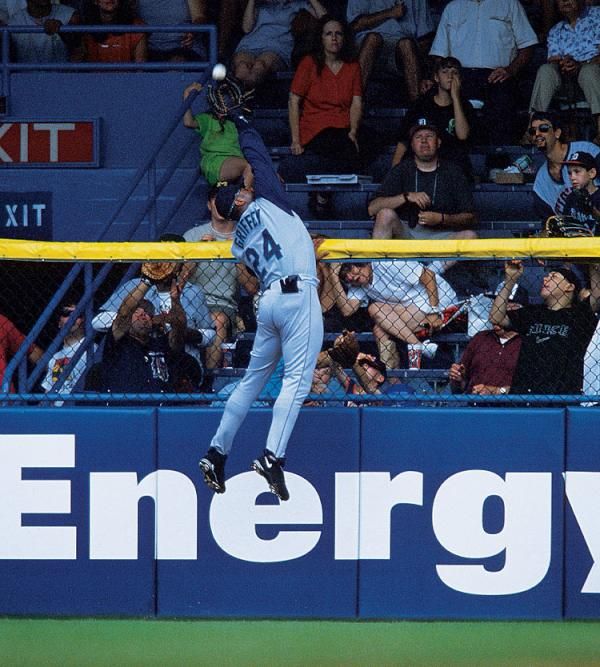 Actually, not just sad but tickedoffable, if I can make up a word.

Sure, baseball itself wouldn’t be being played right now due to COVID-19, but the game of thrones, baseball-style, is playing out in front of us as players and owners argue over who has to give the most so a partial season can start – whenever.

Who you got? The (mostly) billionaire owners or the (mainly) millionaire players?

Me? I don’t have either. I can’t relate to any company, sports-related or not, that pays its CEO 100 or 200 times what its average employee makes, all the while overcharging for its product and milking every penny possible from whatever revenue source there is. And when that average employee makes 90 times as much as the other average working people in this country, that’s hard to fathom as well.

From this vantage point there are no winners. No matter what happens, everyone loses. It’s just a matter of who will take the loss. Right now, it’s the lowest end of baseball’s totem pole, the minor league players. Some clubs are going to quit paying their $400-a-month employees soon. Others, like the Mariners, are dumping a bunch of them. The rich squabble, the poor pay with their livelihoods.

Major League Baseball is a business. We all know that. It’s not the game you played in the backyard with your buddies. And, most businesses right now, the coronavirus pandemic has dented its structure. All interested parties (except the customers, of course), are trying to figure out a way to pound out the dents without too much pain. So far it’s not working.

Make it work. The days are getting warmer, the restrictions are easing. There is a chance to have at least a part of a season. Figure it out.

• One last thing. As if 2020 hasn’t been stressful enough, we’re sweating out our ancient lab’s end of days. Each one seems to be getting harder for my faithful companion Yogi – of the 3,000 or so columns I’ve written since retirement, he’s been on his bed behind me for at least 2,800 of them – as he reaches his late teens.

That awful day of decision is growing closer. So each day, as we sit together and share a small piece of something I’m eating, I try to be a bit kinder, a bit gentler, a bit more, well, unlike “me.” He seems to appreciate it. I sure appreciate him.

For what it’s worth, I’ve been composing his obituary. (I know, an obituary for a dog. All I can say is he deserves it. And there is a commonality about dogs and their humans that seems to touch us all.) At some point it will appear in this space. I’m sorry if that bothers anyone, but there will be a sports connection. With dogs, there always is.

WSU: If you think there is some sort of magic wall that protects athletes from the realities of the world, think again. Theo Lawson has a story about the Cougars’ Noah Williams and Gonzaga recruit Paolo Banchero and a scary interaction a few years back with a police officer. … Theo also spoke with Gardner Minshew yesterday, joining a conference call with the former Washington State quarterback as he prepares, virtually, for the Jacksonville Jaguars’ training camp. For the first time in years, Minshew will head into camp as the presumptive starter. … Elsewhere in the Pac-12, will this be the “Year of the Decommit?” … The most-sought-after football transfer this offseason is probably J.T. Daniels, the USC quarterback who lost his spot after an injury. Daniels announced yesterday he’s headed to Georgia. … The Trojans have added to their football staff with a couple alums. … An appeals court sided with a former USC punter. … Utah has a plan in place for its returning athletes. … It’s 99 days until Oregon’s first scheduled football game. North Dakota State has a bit of a head start. … An Oregon State star linebacker is getting ready for the season in Arizona. … In basketball news, Arizona made official Jason Terry’s hire as an assistant coach. The Wildcats are tapping into their past. … The newest UCLA player is happy to be able to play this season. … Sabrina Ionescu is ready for her commencement speech – and other things. … Here’s one for all you rivalry buffs. One of Arizona’s best softball players is transferring. To Arizona State. … Everyone has happy memories of games gone by. Jon Wilner gave Pac-12 fans a place to share them. … Colorado’s athletic director, Rick George, is optimistic about the school year ahead.

Gonzaga: Corey Kispert joined Jim Meehan for a Virtual Northwest Passages Forum yesterday, talking about his future and the GU program. Jim has this story and you can watch the forum here. … Missed this yesterday, but Jim and Larry Weir connected Wednesday for a Press Box podcast. … Former Bulldog player Jesse Wade is trying to get back on the court at BYU. … A Gonzaga legend hit the biggest shot in Utah Jazz history. I don’t have to name him, do I?

EWU: There are a lot of concerns right now in Cheney. There are the pandemic-induced issues. There are money issues, magnified by the coronavirus shutdown. And there are the football concerns, the ones that happen every season, especially a season that is expected to open at the home stadium of an SEC school. Football coach Aaron Best is dealing with all of them. And keeping his typical attitude. As he told Ryan Collingwood “People want to point out what we don’t have, and our guys look at what we do have.” There’s more in Ryan’s story.

Preps: The WIAA is going to allow “foundation games” in a variety of sports, including basketball. The extra game, which won’t count against a sport’s limit but will be part of their season record, can be used a fundraiser for programs.

Seahawks: The NFL is trying to keep some sort of preparation equity among its many franchises. It’s not easy. … One of the rules that didn’t pass for the upcoming season was a favorite of the Hawks. … The Times’ beat writer, Bob Condotta, joined Larry Weir yesterday for the latest Press Box podcast.

• We weren’t joking about the heat. It’s going to be in the 80s today. And possibly the 90s tomorrow. That’s warm. Let’s hope the 20-year-old air conditioning made it through the winter unscathed. If not, I’ll be spending a lot of time under our backyard maple tree, shirt off, iced lemonade in hand, hoping the Google satellite doesn’t pass over while I’m sitting there. After all, who wants a shirtless picture of themselves on the Interweb for everyone to see? Except Ryan Gosling of course. Until later …