There wasn’t the long line of fans waiting to get into Kraziness in the Kennel that usually packs the sidewalk outside the McCarthey Athletic Center past the Martin Centre.

Maybe 50 people were scattered inside the arena, including 17 Gonzaga players and the rest coaches, staff and media at an event that typically draws more than the 6,000 capacity with fans standing in the concourses.

Welcome to college basketball, or at least the Bulldogs’ annual tip-off event, during the COVID-19 pandemic.

The environment was decidedly different when the ball went up, but there was a lot that looked quite familiar to Gonzaga followers watching on television: Corey Kispert drilling 3-pointers, Drew Timme scoring with a series of crafty moves, Joel Ayayi grabbing a rebound and weaving through the defense for a layup.

And there were many things Zags faithful would love to get familiar seeing: Freshman Jalen Suggs, the highest-rated recruit in program history, finishing on the break with a monster dunk; fellow freshman Dominick Harris driving for a pair of layups; Aaron Cook blocking two 3-point attempts and Oumar Ballo powering inside for field goals.

GU did away with its usual dunk contest and 3-point shooting competition at Kraziness, but those aspects were mixed in throughout a 16-minute scrimmage – played with background fan noise piped through arena speakers.

“It was definitely something different, but I think it showed us what it’s going to be like this season,” Timme said. “I think we can learn from this and just rely on each other more.”

The White team pulled away late to down the Blue 45-36, thanks in part to Kispert’s 14 points and Suggs’ 13 points and five rebounds.

“It was a little loosey-goosey and little offense-oriented,” coach Mark Few said. “I’d like to see a little more physicality. I thought they shared it and the ball moved.”

Kispert, a preseason AP All-America, showed off his silky 3-point stroke, drained a pull-up jumper and added a three-point play off a drive to the rim. His early burst put White on top 21-12.

Blue responded behind Timme, who maneuvered for a pair of baskets in the paint and an Andrew Nembhard 3-pointer to take a 28-26 lead with 4:53 remaining.

Drew Timme is stepping up and making plays… even he agrees he’s on fire tonight 🔥 pic.twitter.com/4QFDXrQSjv

Suggs followed with a dominant stretch.

He hit a jumper, a soaring dunk on the break, a corner 3-pointer and a three-point play as White took control 43-32.

Timme, the 6-foot-10 sophomore who will move into the starting lineup with Filip Petrusev turning pro, made 7 of 10 shots, including a couple of midrange jumpers, to finish with 14 points. Nembhard, the Florida transfer who will sit out this season under NCAA transfer rules, chipped in seven points and three assists.

“We’re getting there,” Timme said. “Obviously, we have a lot of things to work on. We get after it every day.”

Few was pleased for the most part, but wants to see more physicality – he acknowledged Thursday’s earlier practice probably played a role – with the season opener against No. 5 Kansas just two weeks away.

“We have to get up to speed in a hurry,” Few said. 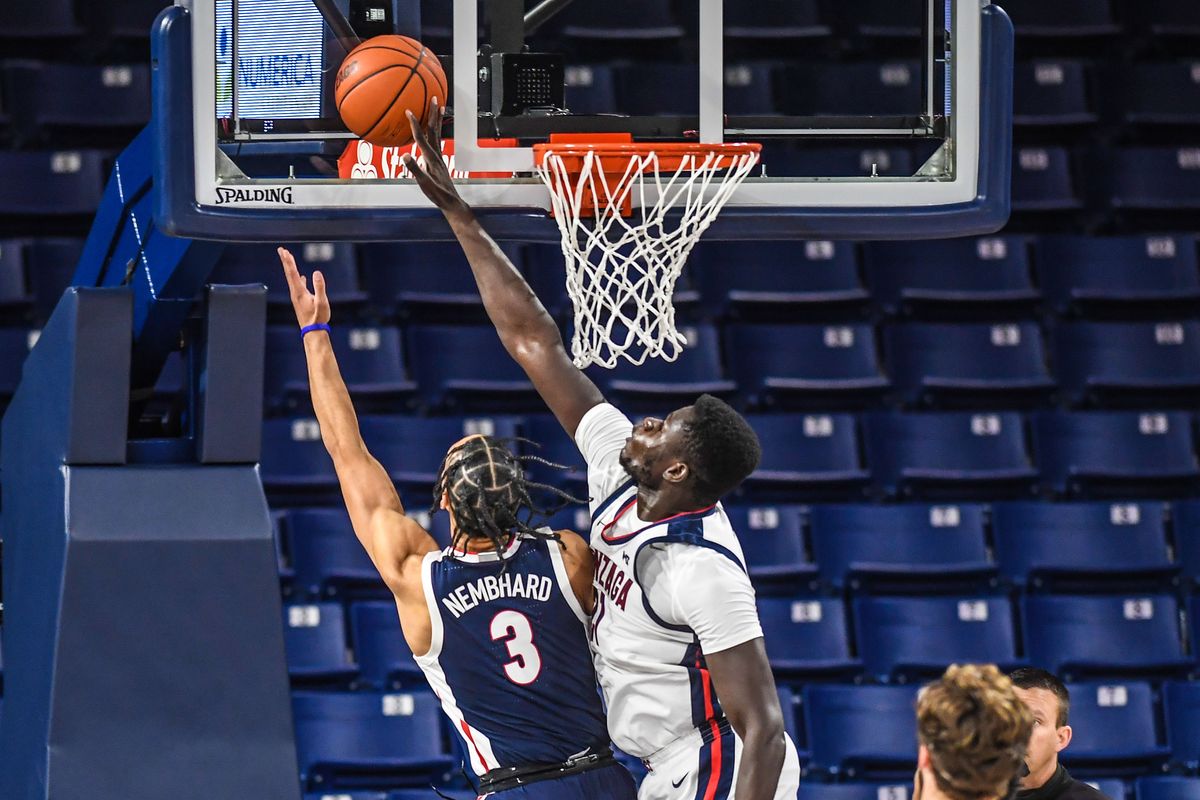 Gonzaga center Oumar Ballo rejects a shot by guard Andrew Nembhard during Kraziness in the Kennel on Thursday in the McCarthey Athletic Center. (Dan Pelle/THESPOKESMAN-REVIEW)