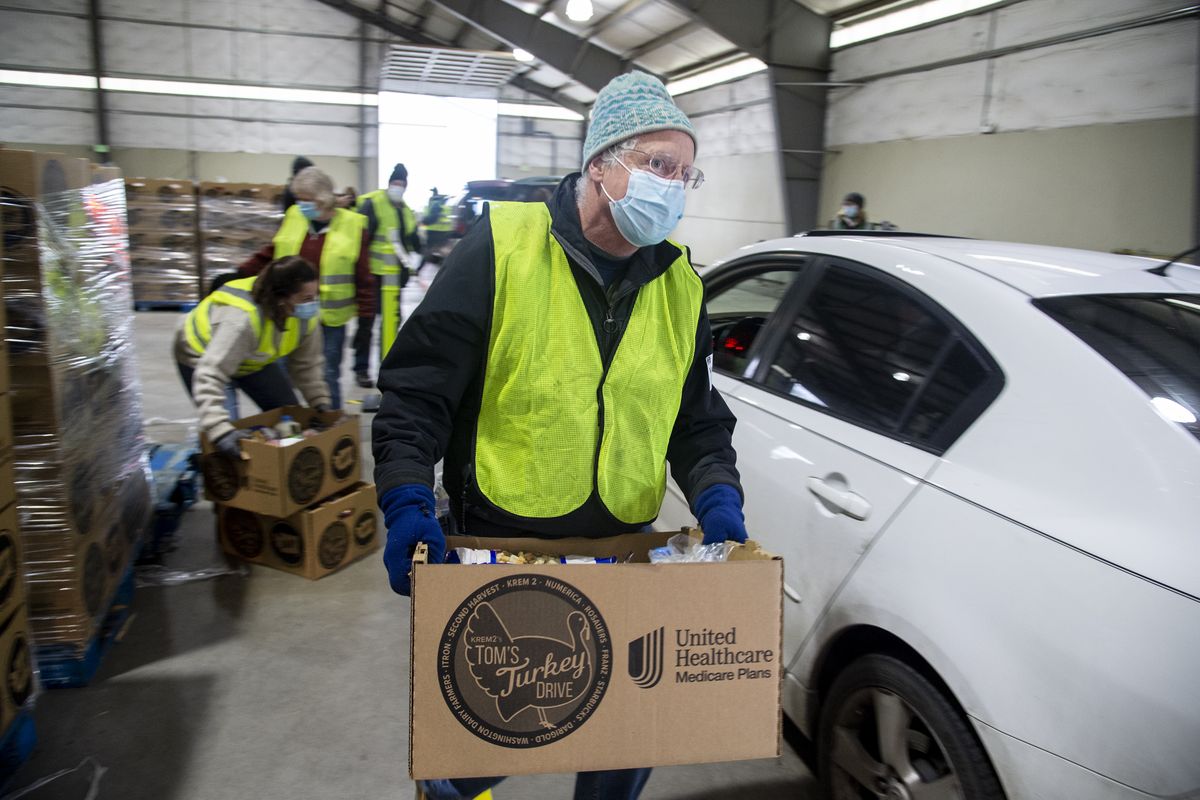 Volunteer John Whalen carries a box of Thanksgiving food to a car in line inside an agricultural building at the Spokane County Fair and Expo Center, Tuesday, Nov. 24, 2020.  (Jesse Tinsley/The Spokesman-Review)

For the 21st year in a row, Tom’s Turkey Drive delivered thousands of meals to families in need Tuesday – this year with the help of 100 National Guard members.

Laura Papetti, anchor and community marketing director at KREM 2, said it’s one of her favorite days of the year. The KREM tradition began with meteorologist Tom Sherry’s idea to give back to the community and has grown for two decades. This year’s turkey meals, complete with sides of potatoes, stuffing and apples, served four to five people each.

“There are a lot of people who have never been in this position and they are this year,” said Eric Williams, community partnerships director at Second Harvest food bank in Spokane.

The Thanksgiving meal giveaway faced hurdles from start to finish this year. The Turkey Tuesday regular location – the Spokane Veterans Memorial Arena – wouldn’t work with social distancing. This year, families drove through the Spokane County Fairgrounds to get their meals. Kinks in supply chains caused problems too. For one, yams were in low supply, Williams said, so about a fifth of Turkey meals this year came with olives instead of yams.

“Somebody asked several months ago, will we be able to do Tom’s Turkey Drive?” Papetti said. “Well, we’ve been through a terrible financial crisis, windstorms – and we’ve done it.”

Yet, just days before the event, Papetti found herself in tears thinking it might unravel due to low donation numbers.

For years, KREM, Rosauers and Second Harvest have partnered to distribute the holiday meals. Shoppers at Rosauers can buy a turkey meal to donate to families while KREM takes direct donations and puts them toward meals.

This year, Rosauers ordered thousands of turkeys for KREM in January, “in good faith,” Papetti said. That was before the pandemic. KREM staff assumed their donation numbers would be much lower this year. In the days before the event, Papetti worried they wouldn’t be able to pay the store back.

It turned out just the opposite. The final count of donations isn’t done, Papetti said, but KREM received enough to pay for all the turkeys and to make a subsequent donation to Second Harvest with the leftover funds. It could be a record.

“It’s shocking, but it’s indicative of what happens when people in this area are in crisis,” Papetti said. “We are so pleasantly surprised by this. 2020 has not handed out a lot of positive, and this was a spectacular positive note.”

Williams said more than anything he felt grateful to the community for sponsoring the meals. He said he wouldn’t “dare start listing people who have sponsored, but these are rock-solid businesses in this region who have donated at a difficult time to donate.”

“The emotions today – simultaneously it’s rewarding and at the same time you’re looking at all the cars and going, ‘Oh my gosh,’ ” Williams said.

For families in need of food assistance, the Second Harvest website, 2-harvest.org, is a good place to start, Williams said. Second Harvest, which spends most of its efforts supplying local food banks, also sets up mobile food giveaway events that are posted online.

Papetti said Thanksgiving dinner doesn’t solve every problem – it’s only one meal. But she said it’s important to give people a chance to enjoy “that iconic meal,” and then the day after Thanksgiving, wake up and start planning ahead to help in a day-to-day way.

“This is a long, dark winter ahead,” Papetti said. “Our eyes are on what’s next.