There aren’t many better ways to begin the college basketball season than a matchup of the top-ranked team in the nation and last year’s season-ending No. 1, ranked sixth to start this one. No matter who the teams are.

When they’re Gonzaga and Kansas, Fox’s Thanksgiving morning broadcast is can’t-miss TV. In Spokane at least.

And when the Zags score in triple digits, separating from the Jayhawks in the second half for a 102-90 win, it’s as good as pumpkin pie and whipped cream.

It was all cooked for the viewers by Fox’s new pairing of former ESPN announcer Adam Amin and longtime CBS analyst Bill Raftery.

What they saw …• The answer to the “what” question is pretty much “everything.”

When Kansas went small, Raftery noticed. As well as describing the Gonzaga response.

When the teams combined to score 100 points in the first half, Raftery noticed and said, “Who’s in charge of the ‘D’ – on both ends?”

And when the Zags broke away in the second half behind the push from freshman point guard Jalen Suggs, he noticed it early, saying, “He’s in attack mode.” When that attack mode led to a double-digit lead – after Kansas had tied the score early in the half – he mentioned, “This kid has taken over.

“Suggs is the real deal,” Raftery said as he left the game late with 24 points, eight assists and four rebounds. “That kid, we are going to enjoy watching all season.”

The Zags can’t be stopped!
pic.twitter.com/qHrmGIuC7F

Amin, who left ESPN in May, has spent the past few years double-dipping with Chicago Bulls radio and TV. It showed in the easy way he kept the action in focus and fed Raftery, the long-ago Seton Hall coach, well-placed verbal passes and space to finish.

• Though the pregame show dealt with the COVID-19-caused disruptions in the early season schedule, the broadcast duo stayed away from the subject, even though GU had a non-playing member of its travel party test positive Wednesday.

They also waited until less than 4 minutes remained to address Kansas’ current issues with the NCAA, an outgrowth of the FBI investigation of recruiting.

Both should have been acknowledged earlier. 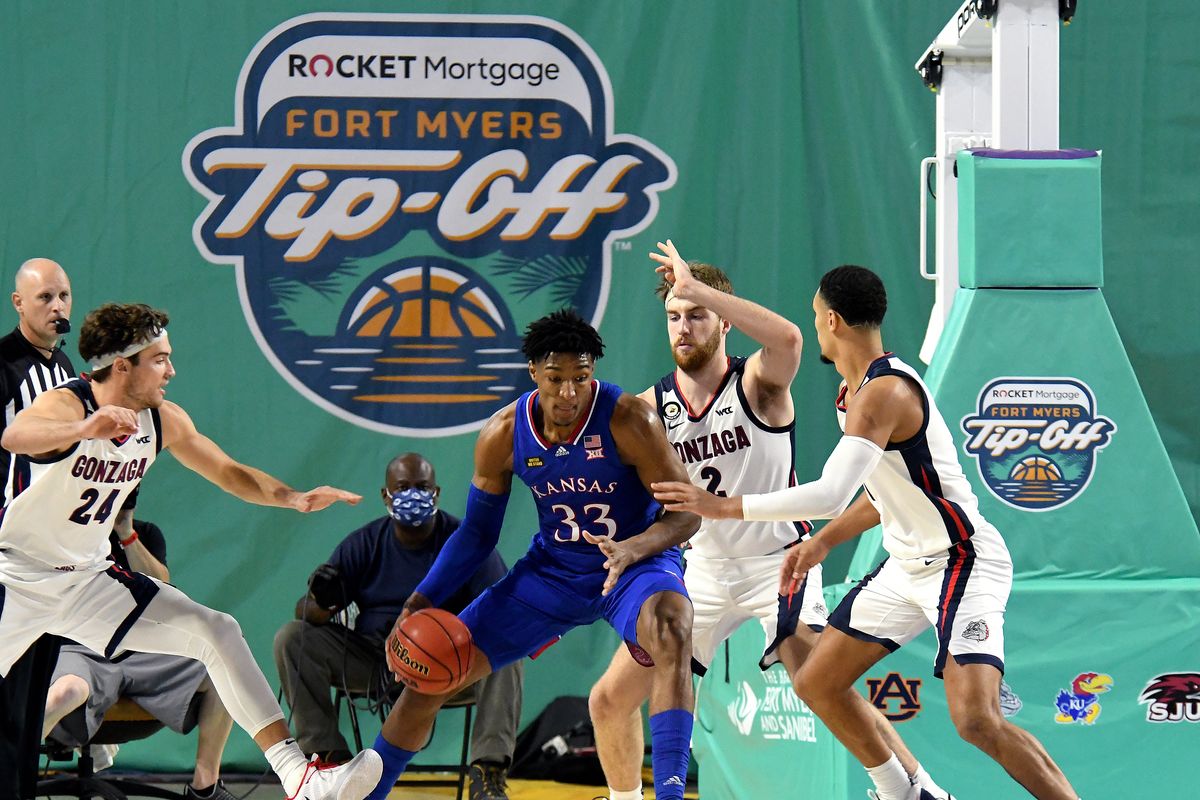 • Full disclosure: We are a Raftery fan. Have been for years, maybe since hearing him describe Jerome Lane’s backboard-shattering dunk live in 1988. (For the uninitiated, the line was: “Send it in, Jerome!,” with an emphasis on the Pittsburgh star’s name. You have to hear it to really appreciate its greatness.)

His voice may not be as smooth as it once was and his trademark “man-to-man!” call might be a bit raspy, but the analysis is still spot-on.

It only took a minute for his talent to show, and he used it to describe one strip and score by Suggs.

The five-star recruit guard “scraped,” as Raftery described it, KU center David McCormick, reaching in and taking the ball away. He took it the length of the floor and scored in traffic, giving the Zags a lead they would never yield.

“What do you think about the advanced billing of this kid,” Raftery asked his partner, rhetorically. “Pretty good start.”

That doesn’t mean the duo didn’t miss some things, including a charge called on Kansas star Marcus Garrett with 42.4 seconds left in the first half.

Amin called it as a block and a bucket, but that wasn’t the call. It was never the call. Replays showed referees Doug Sirmons, stationed underneath, and Michael Greenstein, out front, both blew their whistles, looked at each other and agreed it was a charge, which Greenstein called.

Amin and Raftery spent the next few seconds trying to convince everyone Sirmons had it originally as a block, but it wasn’t true.

• Speaking of misses, veteran official Roger Ayers had one early and it slowed the Zag attack the rest of the half – despite a 54-46 lead at intermission.

Suggs’ first bucket as a Bulldog was an in-your-face dunk on Garrett a minute in. The freshman exploded in emotion, including the seemingly mandatory “Let’s go!” screamed at the top of his lungs. It didn’t seem as if Suggs did it to taunt Garrett, but that was how Ayers interpreted it, giving the guard his first technical as well.

Starting off with a BANG 👊🏼pic.twitter.com/PlTQTOAgXO

Suggs picked up another actual foul a few minutes later and sat until the second half. He scored seven points in his six minutes.

• If you waited around afterward, you not only saw the studio crew sing Gonzaga’s praises, but you also had the opportunity to watch Raftery interview Mark Few after his 600th win.

It was short and sweet, covering about one minute and two subjects, as Few praised KU’s defense and the ability of his returning players to execute offensively.