Twenty-five years ago Friday, a jury in Los Angeles found retired football star and Hollywood actor O.J. Simpson not guilty of the brutal double-murder of his estranged wife and her friend, a restaurant waiter.

This happened despite the fact that Simpson didn’t have an alibi for the time of the murders and overwhelming evidence suggested he was guilty.

Here’s a look back at the entire saga: 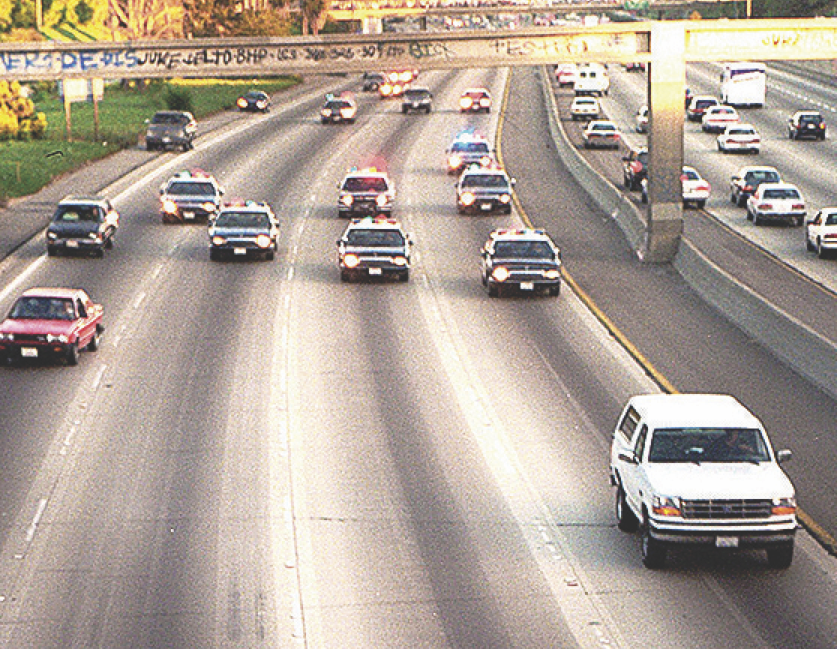 JUNE 12, 1994
O.J. Simpson’s estranged wife, Nicole Brown Simpson, attends their daughter’s dance recital and then has dinner with friends and family. Her mother leaves her eyeglasses at the restaurant. Waiter Ron Goldman volunteers to drop them off at Nicole’s apartment.

Nicole and Goldman are brutally murdered with what appears to be a knife.

That evening, a limo driver is scheduled to pick up O.J. Simpson from his home in the Brentwood area of Los Angeles but Simpson appears to not be home. The driver sees a man enter the house and then Simpson calls to say he’ll be right out. The driver takes Simpson to the airport to catch an overnight flight to Chicago.

JUNE 13
Nicole and Goldman’s bodies are found. Police go to Simpson’s house to notify him of the murders but find his blood-stained Ford Bronco and a bloody glove that matches one found near Goldman’s body. They summon Simpson, who returns home and is brought in for questioning.

JUNE 17
Police call Simpson’s lawyer and tell him they’re issuing a warrant for his arrest. Simpson agrees to surrender but then vanishes. His Ford Bronco is spotted on an L.A. freeway with his friend Al Cowlings driving and O.J. in the back seat – holding a gun, Cowlings tells police via cell phone.

Local and then national TV outlets break into scheduled programming – including the NBA Finals – with live coverage of what comes to be called “a low-speed police chase” over 60 miles throughout Southern California.

When he finally surrenders, Simpson has a gun, a disguise, $8,000 in cash and his passport with him.

JUNE 22
Simpson is charged with the murders. He pleads “absolutely, 100 percent not guilty.”

Judge Lance Ito presides over the trial, which is broadcast live via Court TV and also carried by cable and network TV outlets. The trial would last for 134 days – the longest criminal trial in California history – and would include 120 witnesses, 1,100 exhibits and 45,000 pages of evidence.

Among the evidence the prosecution delivers is a compelling timeline of the events of that night and the fact that Simpson cannot account for where he was during the time Nicole and Goldman were killed. A key witness during this segment is Brian “Kato” Kaelin, who had been living in a guest apartment at Simpson’s home. At one point, Deputy District Attorney Marcia Clark grows so frustrated with Kaelin’s flip answers that she has him declared a hostile witness.

Prosecution lawyers consider the DNA evidence to be strong: Chances that blood found near the bodies was anyone’s other than Simpson’s is 1 in 170 million. The chance that blood on Simpson’s sock was anyone’s other than Nicole’s is 1 in 21 billion. But the prosecution makes a key miscalculation: The expert witnesses called are unable to explain that DNA evidence in terms the average person – including the jurors – can understand.

The prosecution also delves into Simpson’s relationship with his wife and accusations of repeated spousal abuse. To a large extent, Judge Ito won’t allow much of this evidence to be presented to the jury because it is “hearsay” from Nicole herself, who isn’t around to be cross-examined. 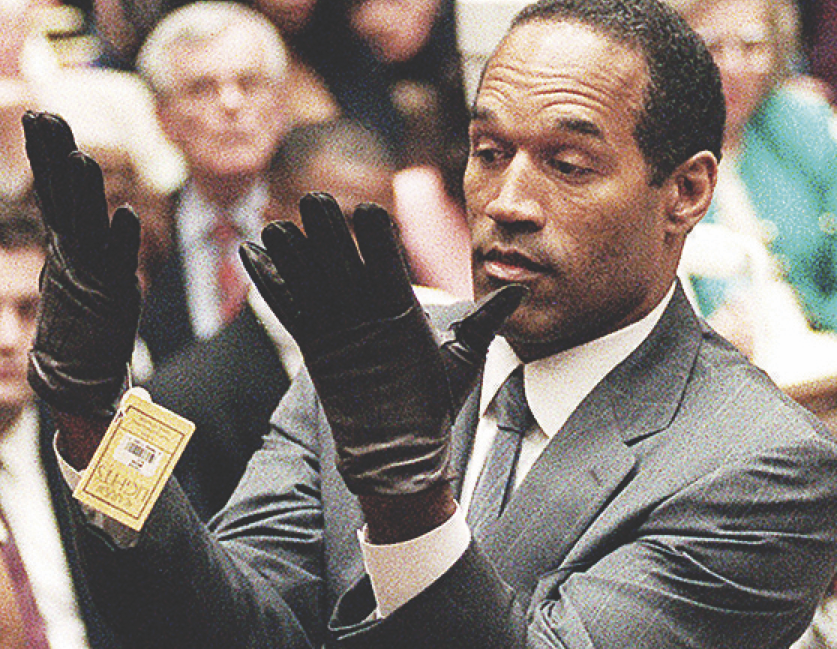 In addition to having much of Simpson’s history of spousal abuse tossed out, the defense wins battle after battle in the courtroom.

In addition to having much of Simpson’s history of spousal abuse tossed out, the defense wins battle after battle in the courtroom.

The most significant is in revealing the racist language and attitudes held by LAPD officer Mark Fuhrman, who had found the bloody glove. While Fuhrman denies using “the N-word” anytime over the previous 10 years, the defense then produces tapes in which he uses that racial slur and admits that, in the past, he had sometimes planted evidence to help secure convictions.

When put back on the stand to defend himself, Fuhrman invokes his Fifth Amendment rights against incriminating himself. This opens the door for the defense to claim he had planted evidence in this case.

The bloody gloves are thrown into further question when prosecuting attorney Christopher Darden asks Simpson to try them on. They appear to be too small – despite the apparent surprise to Simpson himself. “If it doesn’t fit, you must acquit,” defense attorney Johnnie Cochran tells the jury in his closing argument.

OCT. 2, 1995
About 140 million Americans watch on live TV as the jury finds Simpson not guilty. It had taken the jury just four hours to arrive at a verdict.

FEB. 5, 1997
About 140 million Americans watch on live TV as the jury finds Simpson not guilty. It had taken the jury just four hours to arrive at a verdict.

While Simpson had been cleared of criminal charges, he is found “responsible” for the murders in a civil suit brought against him by the families of the victims. They are awarded $33.5 million in compensatory and punitive damages. A 1999 auction of many of Simpson’s personal effects – including his 1968 Heisman Trophy – pays off $500,000 of that. Most of the rest remains unpaid.

Over the next decade, Simpson finds himself in repeated legal trouble, ranging from battery of a motorist during a traffic dispute to pirating satellite TV signals.

SEPT. 13, 2007
Simpson publishes a book – “If I Did It: Confessions of the Killer” – in which he appears to describe how he could have committed the murders. Rights and proceeds from the book are seized and awarded to the Goldman family.

The very day that book is released, Simpson and three other men burst into a Las Vegas hotel room and take sports memorabilia at gunpoint – items Simpson claims belong to him. The other men plea bargain and testify against Simpson, who’s convicted of 12 charges and sentenced to 33 years in prison. 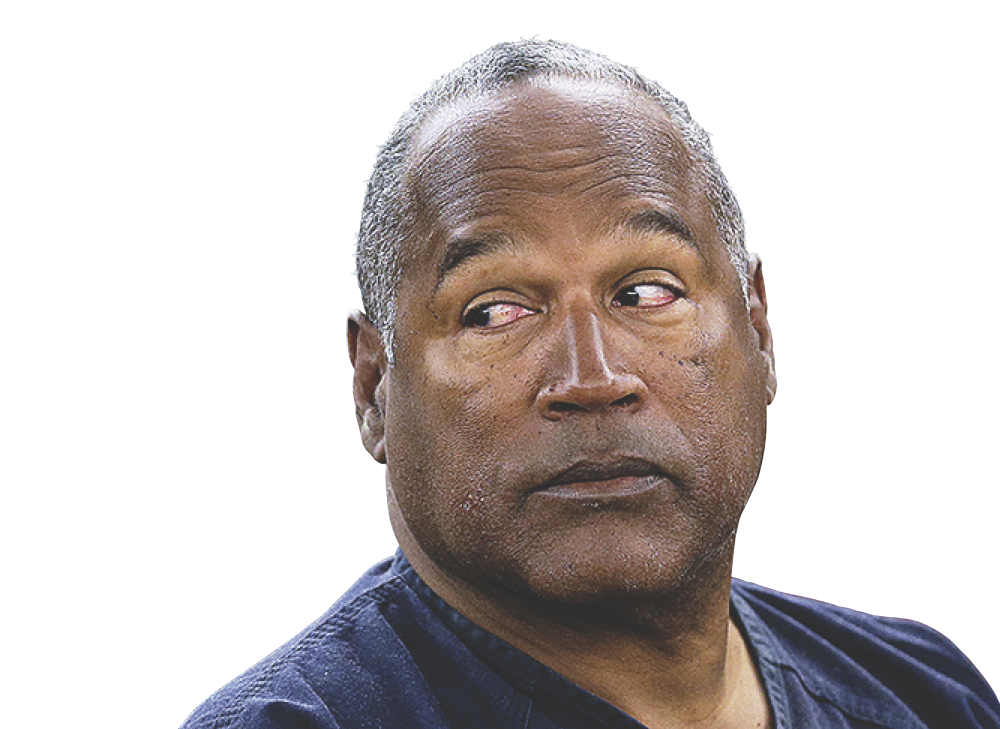 OCT. 1, 2017
Having served nearly nine years of his sentence, Simpson is paroled from the Lovelock Correctional Center in Nevada.

Simpson has since reportedly lived a quiet life in Las Vegas, where he plays golf every day.