THE SOUND OF SPOKANE

By Jim Kershner
Special to The Spokesman-Review

For 75 years, Spokane Symphony has survived recessions, strikes and conductor crises – all while growing into an exceptional arts institution.

The orchestra has been led by a Pulitzer Prize-winning conductor. It has recorded CDs for major labels. It has accompanied legends, including Van Cliburn, Itzhak Perlman and Ella Fitzgerald. In the 2000s, it purchased and renovated the Fox Theater, an Art Deco masterpiece, making it one of the few orchestras of any size to own its own hall.

For these and other reasons, the Spokane Symphony has been called “the smallest major orchestra in the United States.”

1914
The city’s first homegrown orchestra, the Spokane Symphony Orchestra, performs its debut concert at the Orpheum Theater under conductor Leonardo Brill. This orchestra lasts only a few years. Several other early orchestras will pop up and fade away in the 1920s and 1930s.

1945
Today’s orchestra is born when “go-getter” conductor Harold Paul Whelan arrives from Tacoma and wrangles a professional orchestra into existence. It is born under a different name – the Spokane Philharmonic Orchestra – yet it will evolve into the Spokane Symphony.

1946
The orchestra is an immediate success, with concerts that are prestigious society events. Audiences attend in formal gowns, tuxedos and military uniforms. The orchestra also develops a younger audience, as it plays a concert for 2,250 schoolchildren at the Fox Theater.

1950
The NBC radio network airs a Spokane Philharmonic concert nationwide over 122 stations, giving Whelan’s young orchestra a critical boost in both national credibility and revenue. The orchestra is now well-established in the city, although financial struggles will remain a recurring motif throughout its existence.

1954
The orchestra plays for an audience of 8,000 at the grand opening of the Spokane Coliseum. Homegrown Metropolitan Opera star Patrice Munsel shares top billing with the orchestra. A local sportswriter pens a tongue-in-cheek review, saying, “They sound like they been doing this all their lives, and for money, too.”

1957
About 8,200 schoolchildren and their parents crowd into the Spokane Coliseum for a special “pops” concert. Orchestra officials will later describe it as the “the biggest audience of boys and girls ever gathered under one roof in this country to hear a symphony concert.”

1961
A faction of the Spokane Philharmonic’s board attempts to oust founder Whelan. After a tense standoff, the anti-Whelan forces surrender, the Philharmonic board dissolves, and the remaining members immediately create a new board with a different name. The new board retains Whelan and most of the musicians. It is essentially the same orchestra under a new name: the Spokane Symphony.

1962
Whelan departs for a new job in California. A young conductor, Donald Thulean, arrives from Portland. He will become the face of the orchestra for the next 22 years, bringing it to new levels of professionalism and prominence.

1971
The Spokane Symphony brings in world famous guests artists Van Cliburn, Pinchas Zukerman and Itzhak Perlman. It also cultivates its own local stars, including violin virtuoso and concertmaster Kelly Farris. Since Thulean’s arrival, the orchestra has gone from 32 concerts a year to 120.

1974
The orchestra performs 20 concerts at Expo '74, Spokane’s World’s Fair. It accompanies classical superstars Roberta Peters, Claudio Arrau and Perlman. Expo ’74 also provides the Spokane Symphony with its home for the next 33 years – the Spokane Opera House, today’s First Interstate Center for the Arts.

1982
A funding shortfall evolves into a musical crisis, as management announces plans to dismiss or demote 15 of its veteran musicians, including concertmaster Farris. The musicians stage a revolt and deliver a unanimous vote of no-confidence in Thulean. The musicians retain their jobs, and a shaky truce holds for the next two years.

1985
The orchestra hires Bruce Ferden, a rising star and young protégé of Schuller, as its new music director/conductor. Ferden has a high-energy personality, and one musician says admiringly, “The extension cord is plugged in all the time with this guy.” Ferden demands and receives musical precision from his players.

1991
Ferden leaves in order to take a coveted position in Aachen, Germany. (Within days of arriving in Aachen, Ferden is diagnosed with AIDS – he dies two years later.) The board replaces him with Vakhtang Jordania, who in 1983 shook off his KGB handlers and pulled off a dramatic defection from the Soviet Union.

1992
Jordania brings with him a stellar reputation, but the honeymoon is shockingly brief. Orchestra morale plummets, and so does musical quality and ticket sales. The board fires Jordania and pays off the rest of his contract.

1993
Fabio Mechetti, a brilliant Brazilian conductor and Schuller protégé, arrives as the new music director. He provides the orchestra with 11 years of relative calm – and a growing professional stature.

2000
The symphony learns that the historic Fox Theater – where it had performed from 1959 to 1961 and 1968 to 1974 – is destined for the wrecking ball. The orchestra launches the Save the Fox campaign and raises $1 million, enough to purchase the 1931 Art Deco masterpiece.

2001
The symphony immediately launches an even bigger fundraising drive, Fix the Fox, because the old theater needs renovation and a complete acoustical overhaul. The project will take six years.

2004
Mechetti departs. Eckart Preu, a young conductor born in East Germany, arrives as music director. Preu will stay in that post for 15 years and preside over the momentous transition to the Fox Theater (soon to be renamed the Martin Woldson Theater at the Fox).

2007
Washington Gov. Christine Gregoire cuts the ribbon at the Fox’s gala grand reopening concert, which features opera star Frederica von Stade. The $31 million renovation campaign has stretched the organization to its limits, yet after the first rehearsal in the acoustically revamped theater, Preu declares, “Every musician seeks the best instrument, such as a Stradivarius. This building, right here, is our Strad.”

2009
The symphony records a world premiere of "Letters From Lincoln" for a major label. This musical high is followed by an economic low, as the orchestra faces a financial crisis brought on by the Great Recession. Several concerts are canceled. Financial struggles continue for several years.

2012
Pickets appear at the Fox. The orchestra’s musicians go on strike after raises have been deferred for years. One concert is canceled, and the annual Nutcracker Ballet is in jeopardy until a last-minute settlement is reached.

2019
Preu departs and British conductor James Lowe becomes the Spokane Symphony’s eighth musical director/conductor. Lowe’s first season is a smashing success but is interrupted in March 2020 when COVID-19 arrives. Once again, the symphony faces an existential crisis, but for 75 years, Spokane has refused to let its symphony die. 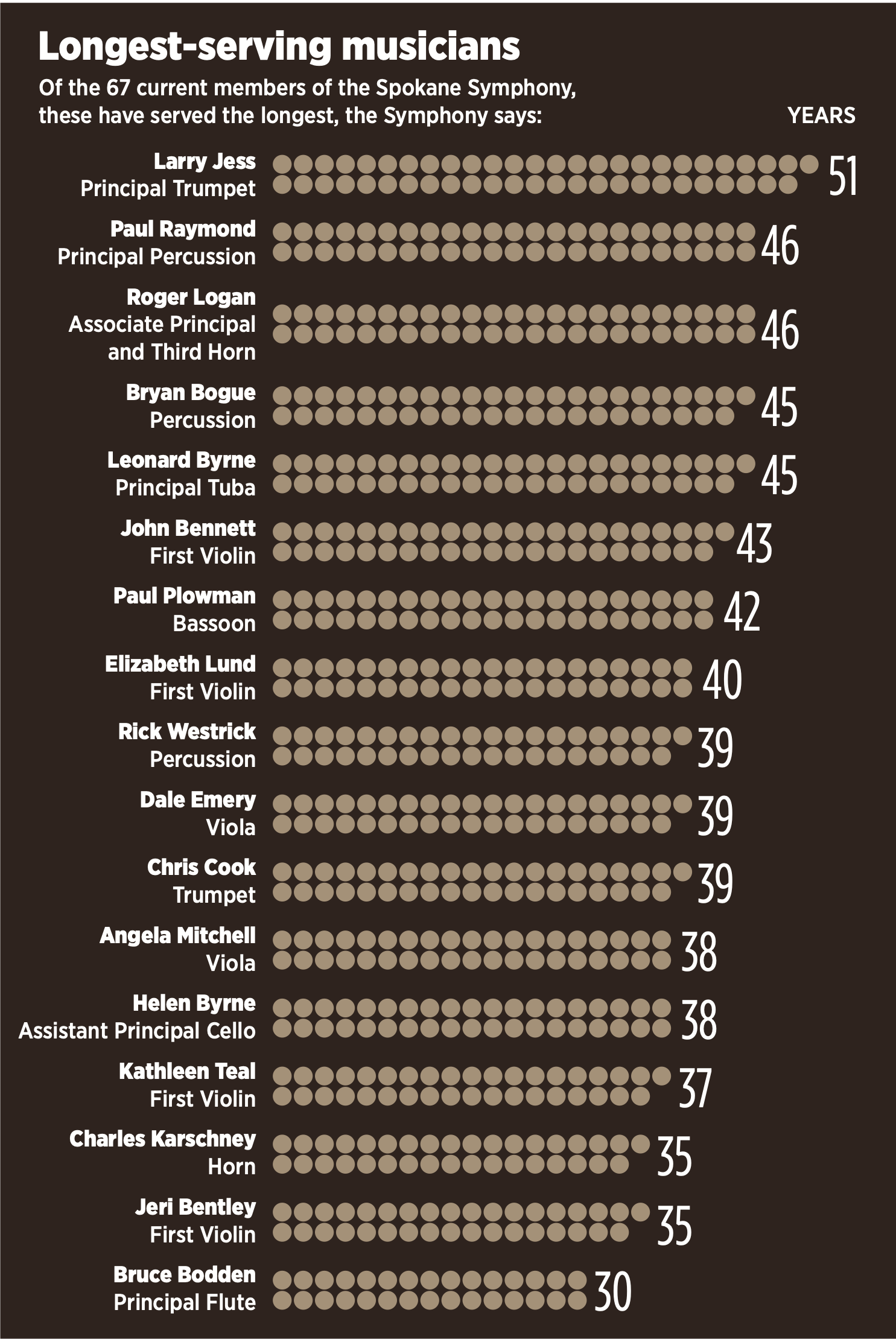 Jim Kershner is author of “The Sound of Spokane: A History of the Spokane Symphony.” He originally wrote this timeline for the Northwest Museum of Arts and Culture.

Sources: Data on musicians from the Spokane Symphony | ALL PHOTOS FROM THE SPOKESMAN-REVIEW FILES