After a Spokane protest devolved into a riot in May, Spokane Police Department tactical team leader Lt. Dave Overhoff knew it was time to get his planned Bicycle Rapid Response Team ready to work.

Overhoff took over the tactical team that works such community events as Hoopfest, Pig Out in the Park and various parades about two years ago.

“One of my visions was to bring the TAC team up to 21st century policing. This was really conducive to our mission, vision and values of our department,” Overhoff said of the bike team. “It had a lot to do with the community outreach that we had envisioned.” 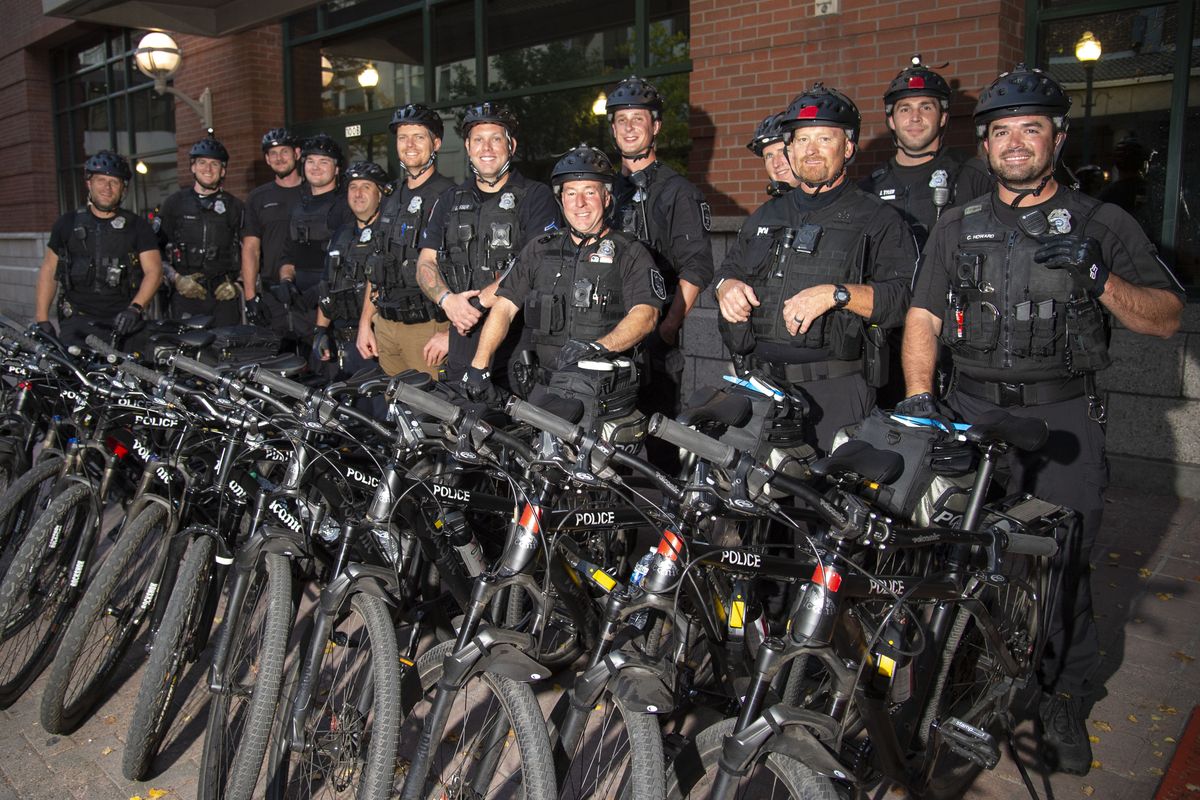 Spokane Police officers, who have been training for the department’s Bike Patrol Team, part of which will work out of the new downtown precinct at Wall and Riverside, pose for a photo before their inaugural ride Wednesday, October 7, 2020. The training materials come through the International Police Mountain Bike Association. (Jesse Tinsley/The Spokesman-Review)

The bike unit is ideal for crowd control and community engagement, Overhoff said.

After the George Floyd protest on May 31 in Spokane ended with officers using tear gas and firing rubber bullets to disperse protesters, Overhoff’s team trained the entire next week to be ready for planned protests the following weekend.

“After the big protest happened, we accelerated our training that whole week to get the basics done,” he said.

Cops on bikes are less threatening, he said, which can make citizens more comfortable approaching them. A member of the group Stronger Together Spokane that has sponsored recent Black Lives Matter Protests in Spokane, Kim Schmidt, agreed.

“It’s much less threatening to have them on bikes,” she said. “Not going to lie, it was a lot better than seeing them in their SWAT gear.”

But Schmidt said the officers on bikes have been less engaged than those on foot and tend to stay further away from the crowd.

“Some of the negatives so far that we’ve seen is they stick too far back from the crowd,” she said. “However, at the last BLM rally when Eddie McBride and his Nazi crew were there they just pedaled on by.”

Schmidt said she hopes to see the officers on bikes break up into smaller groups and keep an eye on people like McBride who are “trying to instigate and incite.”

Kurtis Robinson, president of the Spokane NAACP, said that like any other issue relating to police and community interactions, it requires nuance.

“At the protests I have seen the bike brigade,” he said. “I have also noticed how they were warm to some and distant and aloof to others.”

Robinson said that while he agrees there can be benefits to police officers being in the same environment as protesters, rather than in a police car, it depends on how it’s used.

“I think it’s much more user friendly for the public to engage with them,” he said of officers on bikes. “It’s how they choose to exercise that engagement.”

He also encouraged officers on the bicycle response team to remember each citizen has a different baseline perception of police officers and to take that into account.

“I would say overall it leans more on positive than anything,” he said. “But again time will tell in how they use it.”

Members of the Human Rights Activist Coterie of Spokane, Emily Peters and Jim Leighty, said while they can see the potential positives of the bike team their experience has been far from positive.

“I see how it could be used in a positive way but I’m not really seeing that happen,” Peters said. “For us, it’s a little bit of a threat.”

For officers, riding a bike at a large-scale event makes them more mobile.

“Using the bikes, it makes us a lot more mobile so we can get around to where people are at a lot easier than cars,” said Officer John Tyler, a member of the bike team. “It’s a lot better for us, as far as engaging with the community.”

Tyler said in a crowd-control scenario, one bike cop can do what three patrol officers on foot could. The bikes also allow officers to stop and talk with protest organizers to see how best to keep them safe, the route they plan to take, and answer any safety questions, Tyler said.

“We’re actually out in the same environment so we can hear what’s going on, we can engage with the people who want to have conversations with us,” he said. “It lets us work with the crowd a lot better instead of, I guess, ominously following behind it.”

It also provides a great workout, he added.

“I like being on a bike so much better than being in a car for 10 hours,” he said.

Brownell is a Patrol Anti-Crime Unit officer with SPD who cycles up to 100 miles a week in his free time.

He volunteered to become the department’s instructor and to teach courses to area law enforcement agencies. Brownell said the program has been needed in Spokane for decades and has proven to work at protests these last few months.

“It’s been a great community builder, where one minute, they’re yelling at us telling us they wanted to defund us and all this stuff,” Brownell said. “And then the next minute, they come up and they shake our hands, tell us thank you for being here and keeping us safe.”

Training this week for the 16 bike team officers and a few neighborhood resource officers, who also use bikes, has built a good foundation for officers who learned to ride through crowded streets, set up barriers, and do quick evasive maneuvers.

Overhoff said once the police department starts hosting training for other law enforcement agencies nearby the program will pay for itself.

“We’ll recoup all of our money easily in just one or two schools,” he said.

As the COVID-19 pandemic allows, the unit hopes to offer bike-safety training for children, disabled adults and other first responders.

“We just opened up a world of training that we can bring to the community,” Brownell said.

Overhoff is already planning to expand the Bicycle Rapid Response Team to 24 officers by 2021.