Fifty years ago Friday, race car driver Gary Gabelich set a new land speed record of 622.4 miles per hour driving a car with a rocket engine powered by peroxide and liquefied natural gas at the Bonneville Salt Flats in Utah. His record stood for 13 years.

Gabelich, 30, was a drag racer based in Long Beach, Calif. He spent several years working for North American Aviation, which built rocket stages and capsules for NASA. Gabelich was the same physical size as astronaut Wally Schirra, so he was used as a “stand-in” in test-fitting equipment in the early days of building Apollo spacecraft.

The way it works in land speed racing: A car is prepped and then driven over a course marked a mile in length. Typically, a car is accelerated and crosses the “start” mark at full speed. Within an hour, however, the car must be turned around, refueled and then run over the same course in the opposite direction. Each run is timed, the speed of each run is calculated and the final speed is the average between the two runs.

For years, most attempted land speed record runs were made on beaches — long, flat and smooth. In the mid-1930s, much of this work moved to the salt flats of Utah, which were even longer, flatter and smoother. When cars became jet- and rocket-powered in the 1960s, the resulting numbers increased accordingly. 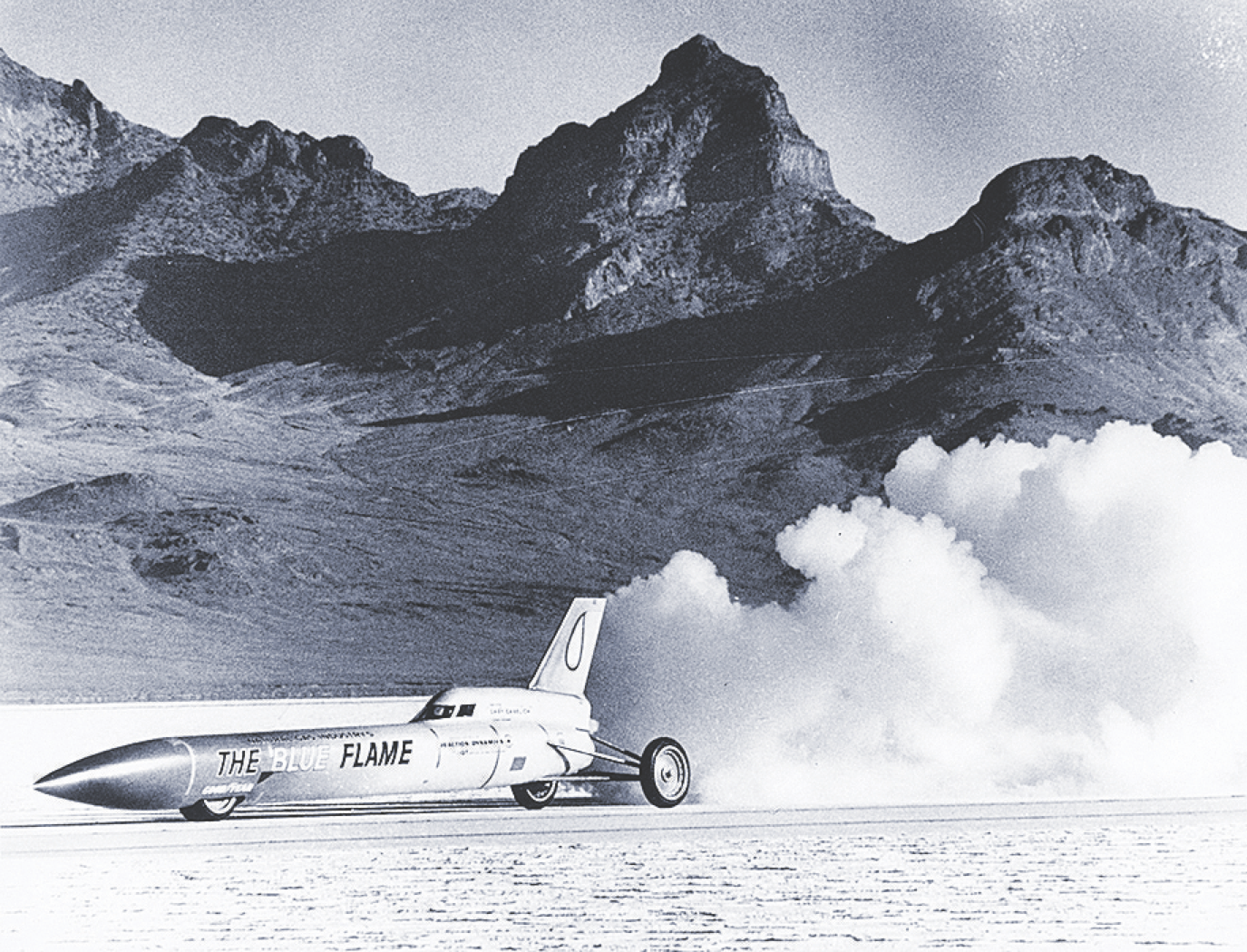 Gabelich’s Blue Flame carried enough fuel to run for just 20 seconds – plenty of time to cross a one-mile mark at that speed. The car generated 58,000 horsepower and 22,500 pounds of thrust. The Goodyear Tire and Rubber Co. designed special tires with a smooth surface to reduce the buildup of heat during the Blue Flame’s runs

Gabelich’s speed of 622.407 mph would stand for 13 years before it was broken by British driver Richard Noble in his Thrust 2 car. Noble’s record would stand for 14½ years before it was, in turn, topped by former British fighter pilot Andy Green in his Thrust SSC. Green would best his own mark a month later, becoming the first driver to break the speed of sound in an automobile.

Even now – 23 years later – Green isn’t done yet. For the past 12 years, Green has been working with developers to build a new car capable of reaching 1,000 miles per hour.

The Bloodhound LSR uses an Eurojet EJ200 jet engine, developed for the Eurofighter Typhoon fighter jet. The car is designed to accelerate from 0 to 800 miles per hour in 38 seconds. This would put a force of 2.5 Gs onto Green, making his apparent body weight 2½ times what it is normally. As an experienced pilot, Green is accustomed to such forces.

The Bloodhound LSR has been extensively tested on a dry lake bed in the Kalahari Desert of South Africa. Green reportedly hit 628 mph last November, making the Bloodhound LSR, unofficially, the sixth-fastest car in history. The team says its next step will be to replace the Eurojet EJ200 engine with a news rocket engine, currently under development, that would use concentrated hydrogen peroxide for fuel.

Green’s team, however, has been beset with financial issues and is actively seeking sponsors.