The picture above – which was taken 72 years and nine days ago – is more than just about an incorrect headline. While the Chicago Tribune was certainly at fault here, plenty of blame can also go to poor polling techniques, overconfident politicians and voters who, by golly, just didn’t vote the way they were expected to.

Presidential election polling wasn’t invented until the Franklin Roosevelt years. Roosevelt had won his four elections so easily that political pollsters never really learned what a close election might look like. 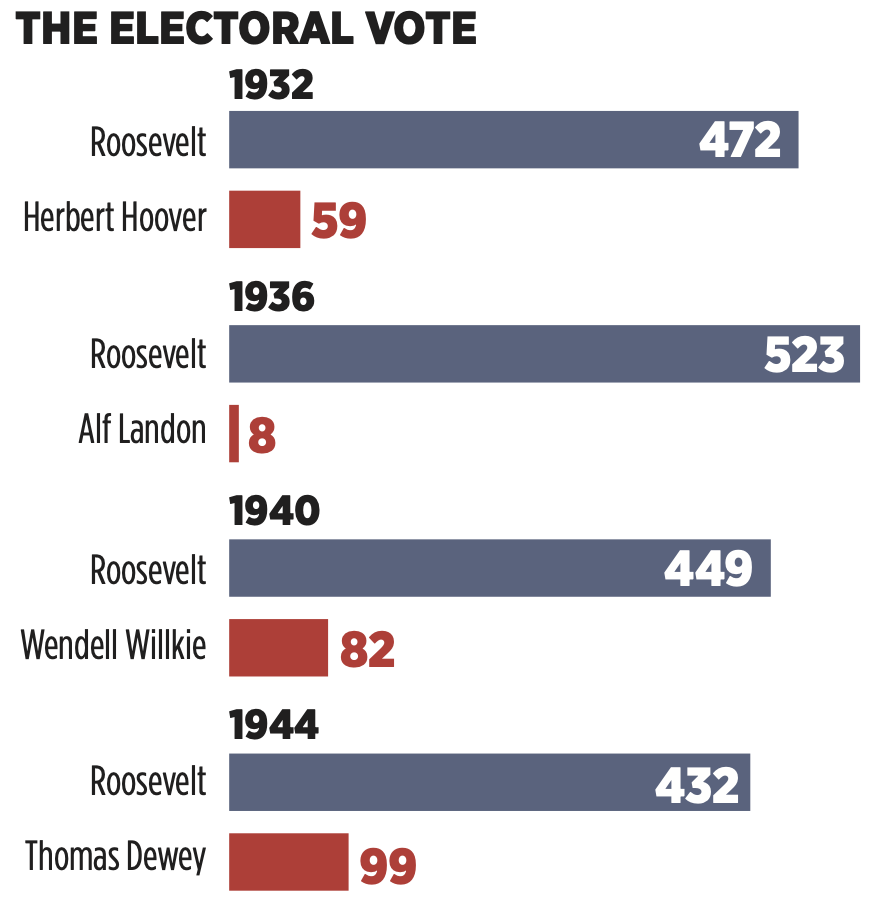 Another piece of the puzzle: how polls were taken back then. Pollsters used a technique called quota sampling – workers would seek out subjects who fit criteria so a sample would have so many men vs. women, city dwellers vs. rural dwellers, and so on.

Gallup’s lack of random sampling, for example, had caused it to overestimate the percentage of Americans who would vote Republican, each of Roosevelt’s last three elections. This had never been fixed. 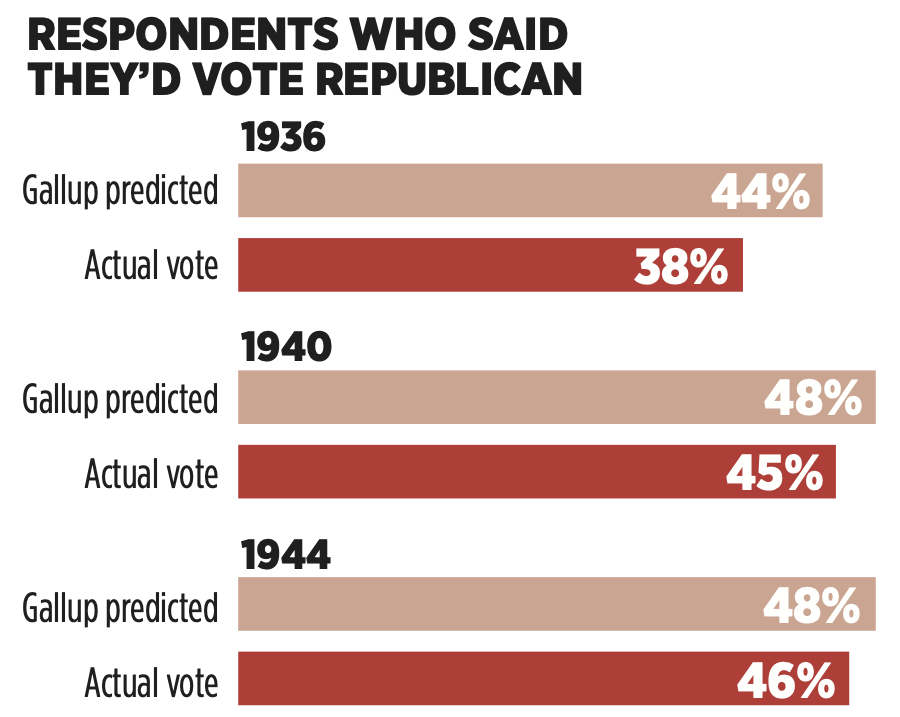 So in 1948, incumbent President Harry Truman’s poll numbers were so bad that overconfident pollsters stopped polling weeks before the election itself. The Roper Poll, for example, stopped following the race in September.

When Truman’s summer and fall campaigning changed the voting plans of the voting public, pollsters were not there to measure that shift.

Here’s how the three major polls at the time measured up against the actual Election Day results: 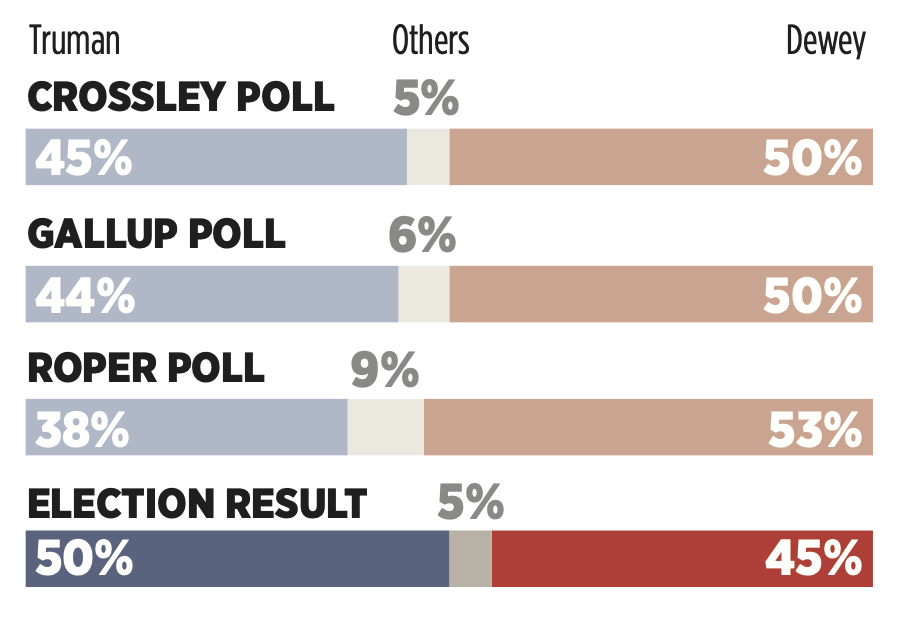 Harry Truman had been plucked out of the Senate by Roosevelt to be his running mate in the 1944 election. Roosevelt died three months into his fourth term, thrusting Truman into the Oval Office.

Truman had embarked on an ambitious array of civil rights programs, which angered the segregated South.

By the spring of 1948, only 37 percent of Americans polled by Gallup said they approved of the job Truman was doing. At the Democratic convention in July, a number of delegates from the Deep South walked out, rather than accept Truman’s civil rights planks, and formed the Dixiecrat party. The Dixiecrats, in turn, nominated South Carolina Gov. Strom Thurmond for president.

Conventional wisdom held there was simply no way for Truman to pull out a victory with the Democratic party divided three ways. So when Truman embarked on a low-frills, “whistle-stop” campaign tour in the summer of 1948, most observers considered it to be too little, too late.

In fact, it proved to be enough to win – but just barely. Five states were decided by less than 1 percentage point: 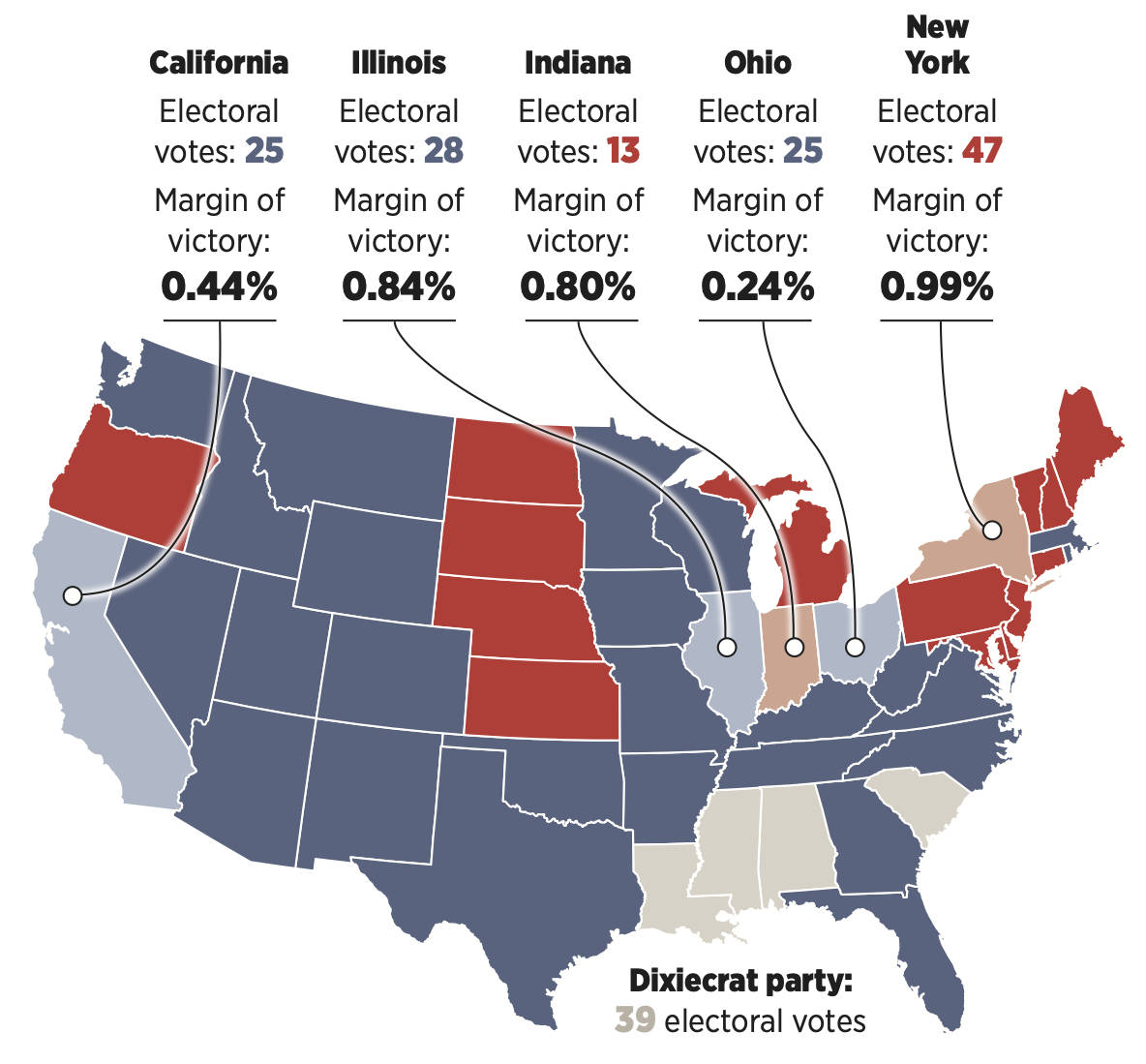 Truman was not popular among newspaper editors. He was endorsed by only 15% of the nation’s daily newspapers. And the ultraconservative Chicago Tribune was certainly not one of them.

The Tribune’s early edition had very early Election Day deadlines, thanks in part to a strike by the typesetters’ union.

That’s why portions of the Front page were created by typewriter, as opposed to the usual linotype machine ... 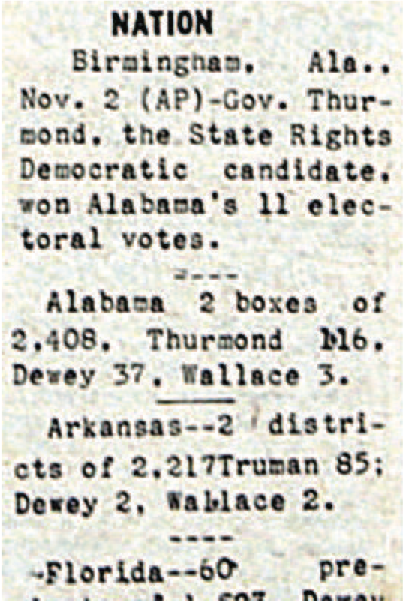 ... and part of that night’s lead story was printed upside-down. 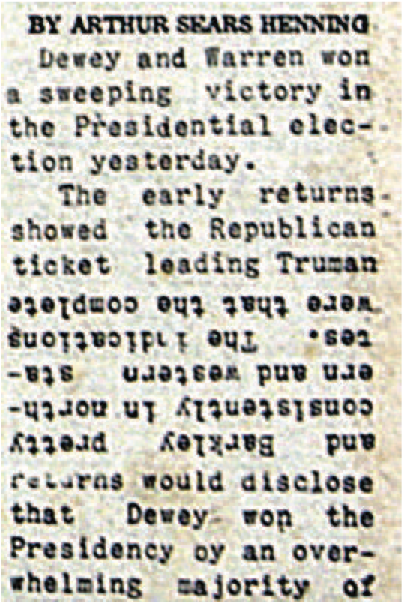 As the early deadline approached, the paper’s longtime Washington correspondent, Arthur Sears Henning, assured managing editor J. Loy “Pat” Maloney there was no way Thomas Dewey – who had run unsuccessfully against Roosevelt in 1944 – could lose. Hence, the infamous headline Truman enjoyed so much the next day when his train passed through St. Louis: 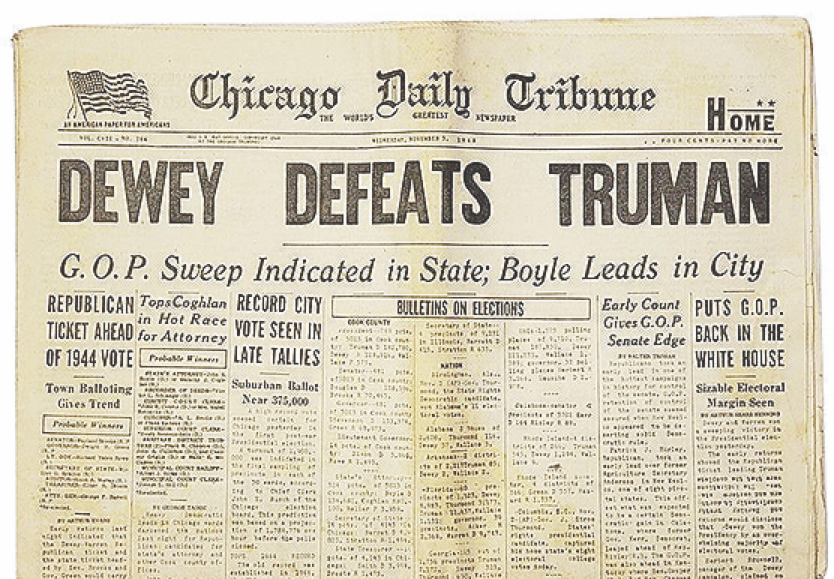 As the night went on, however, it became clear to Tribune staffers that the result would be closer than they had expected – much closer. A later edition of the Tribune led page one with a slightly less emphatic headline ... 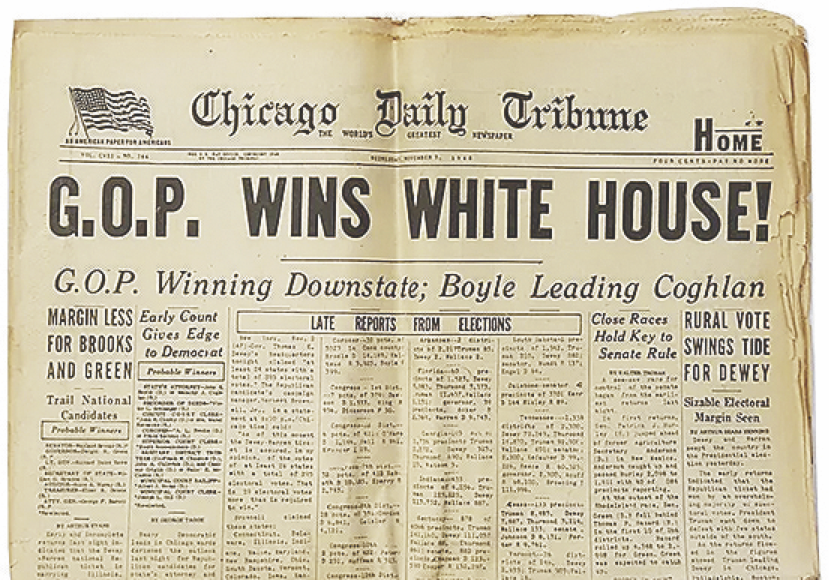 ... and the night’s final edition of the Tribune softened that up quite a bit more:

All editions of the Nov. 3, 1948, Tribune are prized by collectors. By editors of the Chicago Tribune, perhaps, not so much.