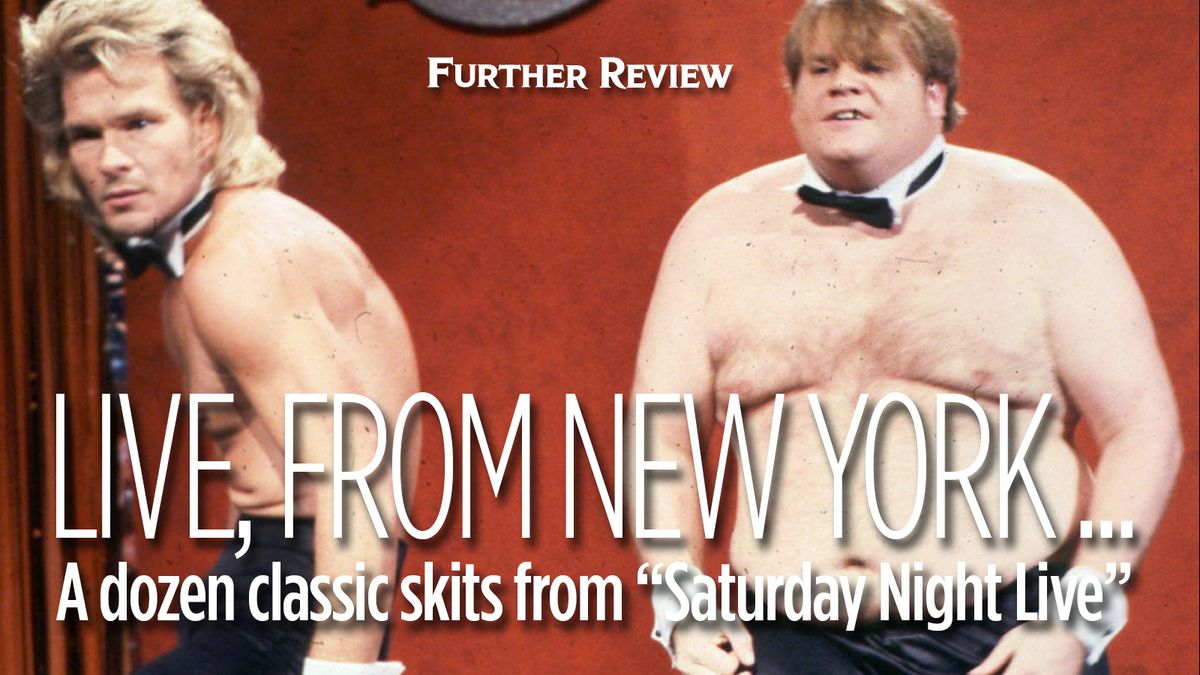 A week during the closing stages of a presidential election cycle just isn’t complete until we see what the wiseacres at NBC’s “Saturday Night Live” have to say. Even in its 46th season, “SNL” provides some of the most biting political satire you’ll find anywhere. Today is the 30th anniversary of a non-political skit – an audition for Chippendales dancers in which ... something ... doesn’t seem quite right. In honor of that, here are a dozen great moments from the history of “SNL.”

John Belushi runs a greasy spoon – based on the Billy Goat Tavern in Chicago – where they serve only three items: Cheeborgers, cheeps and Pepsi. Dan Aykroyd and Bill Murray play his kitchen assistants. In that first of six appearances for the Olympia Café, the word “Cheeborger” was said 80 times.

In his third appearance as guest host that season, comedian Steve Martin sings about the King Tut exhibit that was touring the U.S. A single – featuring backing music by the Nitty Gritty Dirt Band – would be released six days later and would peak at No. 17 on the Billboard Hot 100 chart.

Eddie Murphy plays a version of Mr. Rogers, but adjusted for inner-city ghetto life. He teaches his audience the meaning of some rather unsavory words, is visited by sketchy people, and occasionally “Mr. Landlord.” Murphy would reprise the sketch eight more times before his departure in 1984.

Mike Myers and Dana Carvey play metalhead teens hosting a weekly public-access cable TV program from Wayne’s parents’ basement in Aurora, Illinois. The skit would run for 20 installments over five seasons and lead to a pair of feature films. A 1991 installment with guest star Madonna was a scream.

Guest star Patrick Swayze and Chris Farley – in only his fourth show as a member of the SNL cast – are auditioning for a job as a Chippendales male dancer. Swayze – at his peak as a heartthrob movie actor – has the bod and the moves. Farley, um, does not. But he sure works it anyway.

Will Ferrell plays Alex Trebek, hosting a special charity version of the game show of “Jeopardy!” featuring Darrell Hammond as Sean Connery and Norm Macdonald as Burt Reynolds. The running joke is that the contestants can’t seem to grasp the rules of the game or figure out the softball clues they’re given.

Ana Gasteyer and Molly Shannon play the low-key hosts of a public radio cooking show cursed with uninspiring guests. Until the ninth installment of the skit, when guest host Alec Baldwin introduces a holiday meatball treat that was a springboard for double and even triple entrendres.

Will Ferrell plays the most annoying percussion player in the world in a parody of a VH1 documentary of the recording of Blue Öyster Cult’s 1976 classic hit “(Don’t Fear) The Reaper.” Guest host Christopher Walken plays the producer who eggs him on and Jimmy Fallon is a musician who can’t stop giggling.

In a music video, Andy Samberg and guest host Justin Timberlake sing about how to make, um, homemade gifts for their girlfriends. The D-word was bleeped 16 times in its network broadcast but the song itself would win an Emmy Award for original music and lyrics.

Tom Hanks plays David S. Pumpkins, the star of a supposedly scary amusement park ride that confuses, rather than scares, the riders. Streeter Seidell and Bobby Moynihan play Pumpkins’ dancing skeletal sidekicks. A year later, the skit would be turned into a 30-minute animated TV special.