Local artist, entrepreneur and, most recently, TikTok star Maayan Gordon’s approach to TikTok is more scientific and experimental than a casual observer might expect from a platform otherwise largely dedicated to entertainment.

Gordon monetizes her videos because why not? But the money, she said, is hardly a consideration. Her real motivator, sharing work and meeting other artists aside, is curiosity.

Gordon’s parents – both hold doctorates in STEM fields – inspired her early on with their love of science.

“I grew up with that ability to analyze and theorize and predict and hypothesize and then test out and figure out what’s going on in a very puzzle-like manner,” she said.

In other words, “I’d rather post a video that gets 20,000 views but learn something really interesting rather than a video that goes super-viral but not know exactly why it went viral.”

In the last 10 years, that creative curiosity has led Gordon and her husband, Ben, through a variety of businesses specializing in everything from smoking accessories to intricately carved leatherwork and custom graphic prints, the last of which, somewhat unexpectedly, led them directly into glassblowing.

After printing a set of branded stickers for a glassblower friend, the couple was suddenly inundated with requests from other glassblowers.

As she became more familiar with her glassblowing clients, Gordon saw that they were struggling to sell their work, so she decided to start bartering her stickers for glasswork that she could turn around and try to sell herself. 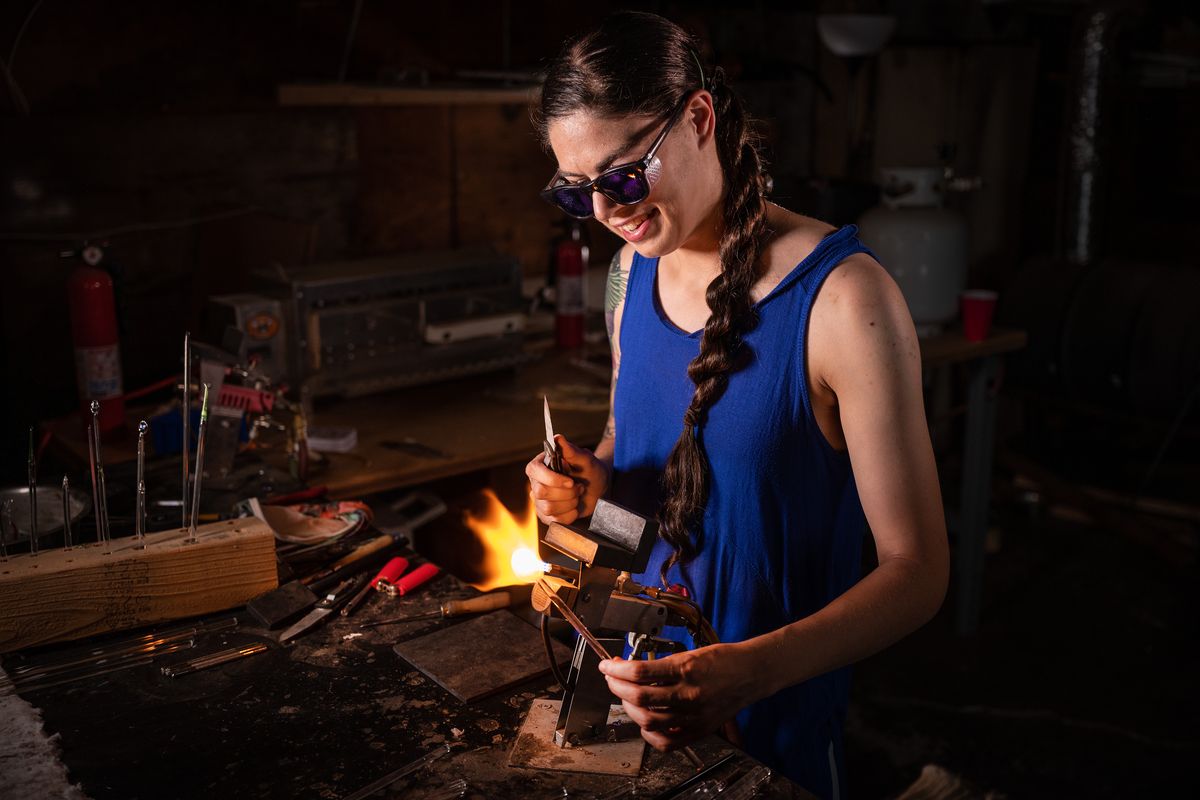 It was a mutually beneficial trade, she explained, because it ensured that the artists wouldn’t have to suffer the sort of heartache that comes from lowering the prices of the more labor-intensive pieces while, at the same time, giving her a chance to develop her marketing skills.

In a way, marketing was her first love.

“I’m really people-driven, and marketing is all about connecting with people,” she said. “It’s something that I find both incredibly fascinating and very enjoyable.”

Along the way, the monotony of cutting stickers and printing T-shirts had started getting to her, so she decided it was about time she tried her hand at glassblowing.

“I took one lesson and fell in love with it right away,” she said, explaining how the ability to create something beautiful in such a short amount of time immediately caught her attention.

Soon after, Gordon and her husband opened their own studio, Monkey Boy Art.

As the couple set to work building their new business, Gordon was constantly experimenting with various forms of social media marketing, and, realizing how visual-focused and attention-grabbing TikTok’s infinite scroll model could be, she thought it would be a perfect medium for showcasing her glasswork.

Her 2.1 million followers would agree. Her TikTok account, @worldofglass, features her work, as well as that of other glass artists all over the United States.

“Glassblowers work really, really hard … it’s an industry where people don’t understand a lot about what actually goes into making the pieces,” she said, explaining how, in addition to helping sales, TikTok has become a tool for education.

“I have this really great ability to help out other artists … I feel very fortunate,” she said.