A landmark 102-year-old covered wooden bridge outside of Colfax was destroyed Monday night in a 3,000-acre fire that is still burning in Whitman County.

The Manning-Rye Covered Bridge crossed the Palouse River and was constructed in 1918 by the Spokane and Inland Empire Railroad. The bridge was one of just two remaining in the state of Washington. The last remaining bridge of this type in the state, the Grays River Covered Bridge, is located in Wahkiakum County in southwestern Washington.

Valoree Gregory, Director of the Whitman County Historical Society, said the entire county would miss the bridge, and the other structures lost in the fires. Gregory, who grew up in the nearby town of Steptoe, said she knew the previous landowners and used to walk across the bridge and visit the family as a child.

Gregory said the day the fires hit, she was in Colfax at the historic Perkins House. It was smoky and windy, and she feared the fire would come down the hill on the Western side of town and burn through the community’s historic downtown.

Firefighters were able to contain that fire, and only a few structures in Colfax were lost.

Unfortunately, she said, reports of other lost historic structures came through out the next few days as other fires blazed through the county. Malden lost its historic Post Office in addition to most homes and government buildings, and Pine City lost a historic church.

She said the church, which was made from local stones, had fallen into disrepair in the 1990s, but a group of volunteers came together to restore and save it. After the fire, all that was left was the stone walls. 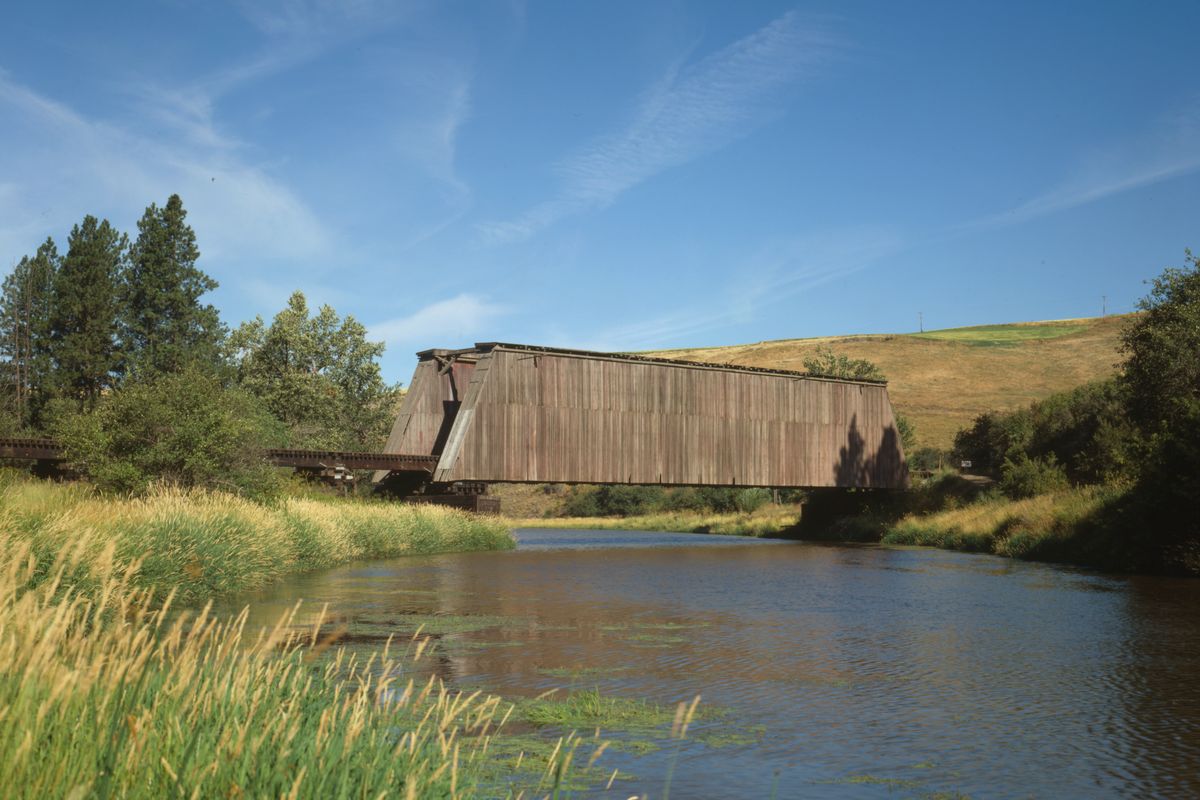 UNDATED PHOTO - The Manning-Rye covered bridge in Whitman County was built by the Spokane and Inland Empire Railway around 1918. It was destroyed in a wildfire Monday, Sept. 7, 2020. Photo from the Library of Congress Collection (Library of Congress)

Michael Houser, an architectural historian for the Washington State Department of Archaeology and Historic Preservation, said historic covered wooden bridges are rare and the bridge that spanned the river in Colfax was especially unique.

The bridge outside of Colfax was one of around eight in the Pacific Northwest.

Most wooden bridges have wood on all sides to protect their structure, but the Manning-Rye covered bridge’s top was left open. He said the Whitman County bridge was also constructed about 10 years after most bridges of its kind. According to documents submitted for the bridge’s entry in the National Register of Historic Places, the 1918 bridge likely replaced an original structure that spanned the Palouse River when unique electric railroads were built in the region in 1907. The top was likely left open to allow the locomotive and overhead electric lines to stay connected.

According to historic documents, the bridge was owned by the Great Northern Railroad until 1967. In 1969, it was purchased by a private landowner who saved the structure from demolition. Before it burned, the bridge was the only access point to a home surrounded by wheatfields. The fire destroyed the home, the bridge and several other structures around the area. The Manning Fire has burned 3,063 acres and is about 25% contained, said Sydney McBride, the public information officer trainee on the Southeast Washington interagency team fighting the fires.

The fire, one of several that broke out in Whitman County, was a separate blaze from the fire that destroyed about 80% of the town of Malden, which also has strong ties to railroad history. Since Monday, 600,000 acres (938 square miles) have burned, the second-highest count since 1 million acres burned in 2015.