The candidates faced off at Case Western Reserve University in Cleveland for the first of three meetings ahead of Election Day. Pandemic-related health precautions made for an unusual scene for a presidential debate, without the customary, pre-debate handshake between the candidates and a sparse, silent audience.

But the quiet didn’t last. After the candidates exchanged cordial, socially distanced greetings – including Biden’s signature, “How you doin’, man?” – the debate devolved into 90 minutes of mostly uninterrupted cacophony.

“Gentlemen, you realize you’re both speaking at the same time,” the host, Fox News anchor Chris Wallace, said at one point.

Trump repeatedly talked over both his opponent and Wallace, while Biden called Trump “a clown” and “the worst president America has ever had.” 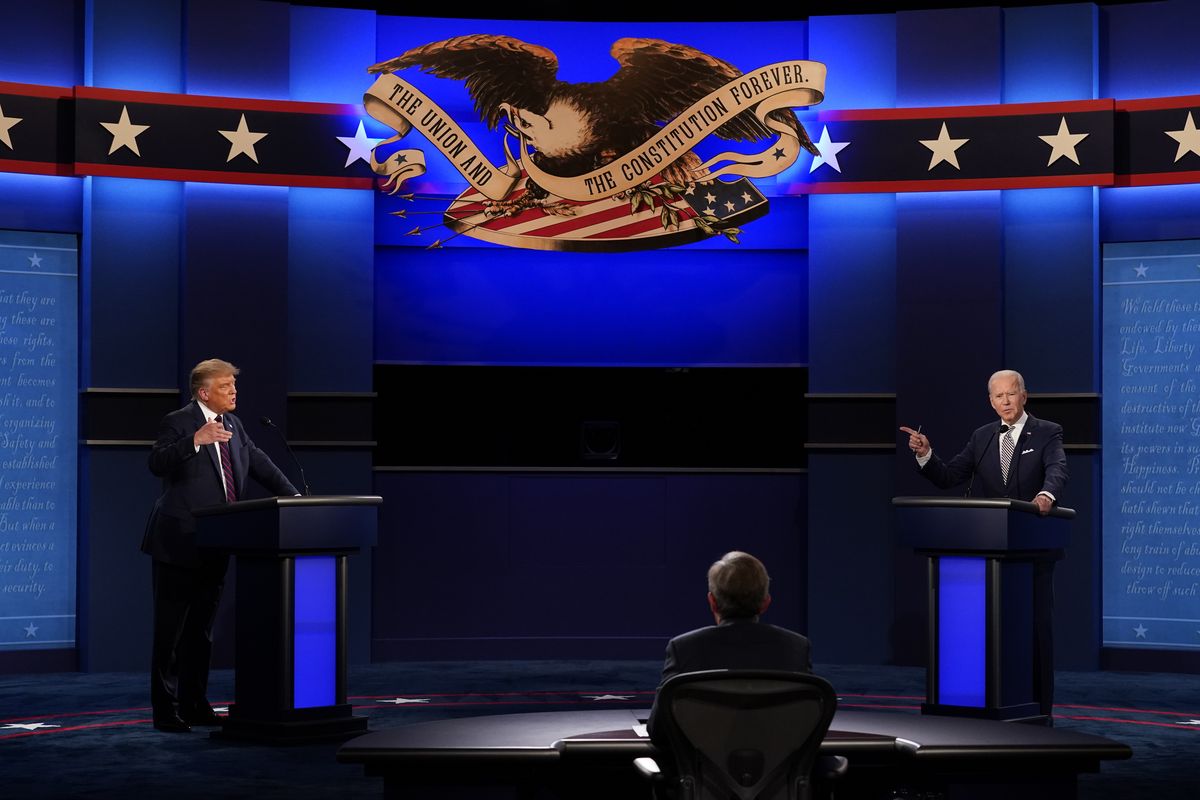 Going into the debate, it was unclear how much either candidate’s performance could sway voters. Just 3% of likely voters said they were undecided in a Sept. 2 poll by Quinnipiac University, and a Monmouth University poll released a week later found the same percentage of registered voters were undecided.

It’s equally uncertain how influential the debates will prove. In 2016, polls showed most viewers thought Trump performed worse in the debates than Democratic candidate Hillary Clinton before he went on to win the presidency.

With Biden leading in recent polls in key swing states, some analysts expected Trump to use Tuesday’s debate to win over that narrow slice of undecided voters, but the president – who showed himself to be an unconventional debater in his first campaign – doubled down on his 2016 tactics. He frequently seemed to ignore Wallace’s questions, veering into different topics while the veteran newsman tried in vain to steer him toward an answer.

Trump repeatedly interrupted Biden during the Democrat’s two-minute response periods, prompting multiple rebukes from Wallace. On several occasions, the former vice president turned away from Trump to look into the camera and address viewers directly.

In an exchange over the economy, Trump defended his handling of the economy, claiming that even Democratic governors have said he has done a “tremendous job.” In response, Washington Gov. Jay Inslee tweeted, “This governor does not think Trump is doing a ‘phenomenal’ job.”

Trump also repeated a frequent line that he had built “the greatest economy” before COVID-19 decimated it and said Biden would “close down the whole country, and destroy our country.”

Biden, in response, turned to the camera and addressed the residents of the towns where he grew up in Pennsylvania and Delaware, which he frequently invokes to bolster his working-class credentials.

“You folks living in Scranton and Claymont and all the small towns and working-class towns in America,” he said, “how well are you doing?”

When a question about Trump’s pick to fill a Supreme Court vacancy veered into a discussion of health care, Biden touted his role in enacting the Affordable Care Act, the Obama administration’s signature health care law. The Supreme Court is scheduled to hear a case that could overturn the law, known as “Obamacare,” just days after the election.

After criticizing the Affordable Care Act, Trump struggled to answer a question from Wallace on what his health care plan is. Eventually, the president pointed out that he got rid of the individual mandate, the Obamacare provision that required all Americans to have health insurance.

“He has no plan for health care,” Biden replied. “He has been promising a health care plan since he got elected. He has none.”

Wallace also brought up a New York Times report published Sunday that revealed Trump paid just $750 in federal income tax in both 2016 and 2017, far less than the average American taxpayer. Trump has called the report “fake news” but has not taken issue with a specific part of it and has long resisted making his tax filings public.

After Wallace asked how much he had paid in federal income taxes in those two years, Trump replied, “Millions of dollars.”

Trump twice ducked opportunities to clarify his past remarks on controversial issues. Wallace first asked if the president would condemn white supremacists and militia groups.

“Sure, I’m prepared to do that,” Trump said when he was pressed by Wallace. “What do you want me to call them?”

When Biden suggested the Proud Boys, a far-right group, Trump said, “Proud Boys, stand back and stand by.”

Trump then pivoted, saying extremist groups are “a left-wing problem.”

Wallace closed the debate by asking both candidates if they would commit to accepting the election results and urge their supporters to stay calm while votes are being counted. Biden said he would, but Trump repeated his frequent claim that the election will be rigged.

“This is going to be a fraud like you’ve never seen,” Trump said. “This is not going to end well.”

Wallace ended the debate abruptly, with both candidates still talking over each other.

“President Trump, Vice President Biden,” Wallace said, “it’s been an interesting hour and a half.”

Trump and Biden will face off in two more debates, in Miami on Oct. 15 and in Nashville on Oct. 22. The vice presidential candidates, Kamala Harris and Mike Pence, will meet for a single debate Oct. 7 in Salt Lake City.