In the era of COVID-19, the pews at Spokane Valley Church of the Nazarene are perfectly aligned.

They stand 3 feet, 1 inch apart. Blocking off every other row offers just more than the 6 feet of recommended social distance between attendees.

Slowly and steadily since the COVID-19 lockdown struck the community by surprise last March, religious services have adapted to evolving guidelines while maintaining a strong sense of community – either face-to-face or online.

Places of worship are delicately balancing the needs of those pining for in-person connection after, in some cases, more than a year of quarantining, with the health risks of congregants who could still be susceptible to COVID-19. 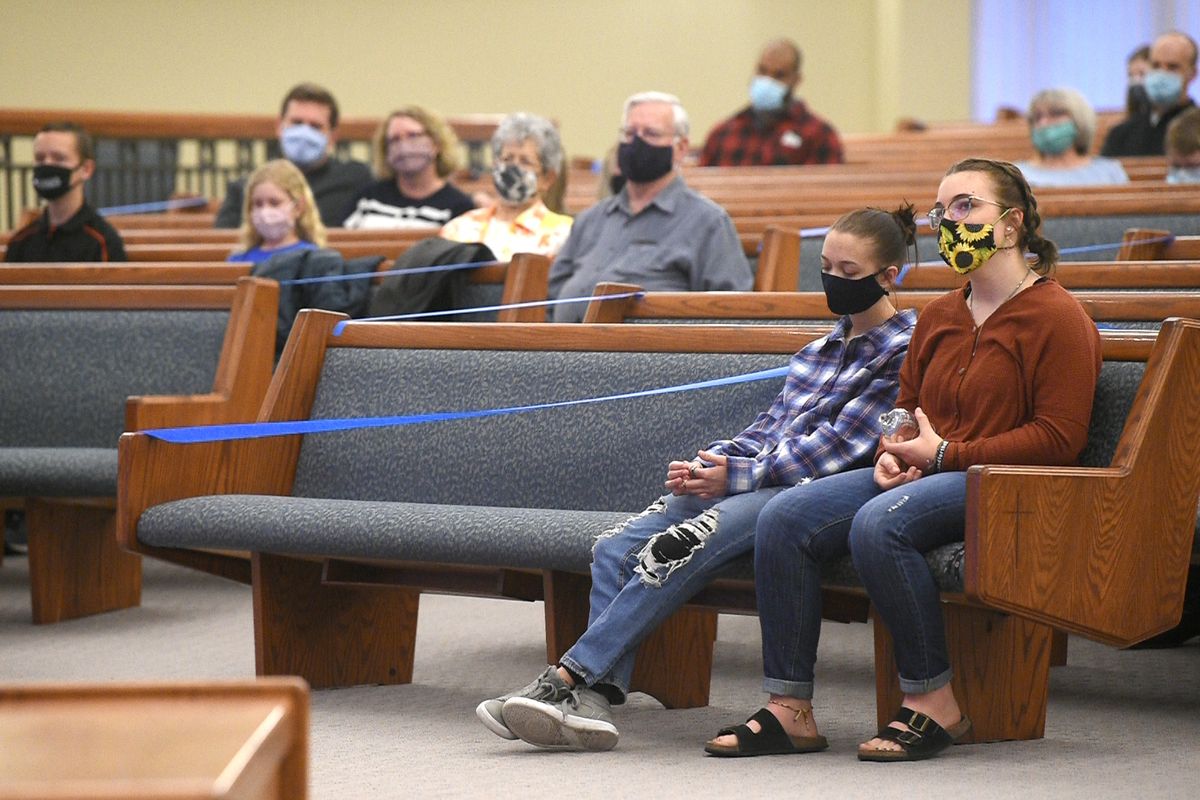 Grace Sexton, 14, and Grace Ayer, 15, sit in the front row and wait to participate in the Good Friday service at Spokane Valley Church of the Nazarene Friday, April 2, 2021. Though church attendance is more relaxed than last Easter, most churches are still practicing social distancing, masking and livestreaming services to those who can’t make it. (JESSE TINSLEY/THE SPOKESMAN-REVIEW)

For many religious leaders, planning services remains a complex proposition even amid continued progress in reopening statewide, and increasing vaccinations in the community.

Despite the normalization of online platforms like Facebook live and Zoom during the pandemic, some congregants tell spiritual leaders there’s no replacement for the sense of community and spiritual nourishment offered by an in-person service.

Vaccines offer a light at the end of the tunnel, as more people build defenses against infection that could spread at a place like church.

But leaders also hear from congregants who are just fine worshipping from home. In fact, they may prefer it, and churches are more than willing to oblige.

“We’ve spent the money to upgrade systems, so why not keep using them?” said The Rev. Kimberly Meinecke, the priest-in-charge at St. David’s Episcopal Church in north Spokane.

Although the state’s steady reopening continues apace, with diners welcomed indoors at restaurants and small crowds returning to sports stadiums, places of worship in Spokane remain all over the map when it comes to in-person services. Some have yet to reopen, while others have been gathering in person for months.

But it’s not just weekly services that are impacted by the new guidelines. Many places of worship are busy planning for the summer, hosting outdoor choir camps and Bible schools.

Aside from between five and 10 congregants who join services in-person to read scripture, St. David’s Episcopal Church has remained closed through the pandemic. The small church was built in 1956 and has no ventilation system, making airflow nearly impossible.

“We have enough people in the congregation who are in at-risk categories, so we are using an abundance-of-caution perspective to make sure that we do not have any routes of transmission that happen at the church,” Meinecke said.

Similarly, St. Mark’s Lutheran Church on the South Hill hasn’t had an in-person service in more than a year, although it’s formed a committee to work through the reopening process.

Part of the challenge to reopening is the ever-changing guidelines, said Mark Nelson, an interim pastor at St. Mark’s. The church could accommodate 200 guests based on the current regulations, but it would have to undergo a deep clean after every service.

“Our biggest concern is that we want people to be safe – we would feel terrible if someone got sick because we were in church,” Nelson said.

The congregation at the Korean Presbyterian Church of Spokane felt the impacts of COVID-19 firsthand.

At a time when community spread in Spokane County was rampant, the church experienced an outbreak last December that forced it to shut back down, according to Pastor Eun Bae Moon.

“We started (to) reopen in March, but not many joined,” Moon said.

Although “everybody in my congregation is doing well, everybody is recovered,” Moon said many remain hesitant to return in person, and the church continues to broadcast its services online.

Kelli Hawkins, Spokane Regional Health District spokesperson, said places of worship have not disproportionately been a source of COVID-19 outbreaks – although she noted it’s up to churchgoers to self-report positive COVID-19 cases to enable contact tracing.

Places of worship should feel welcome to reach out to the health district and work with health experts regarding activities, Hawkins added.

Spokane Valley Church of the Nazarene has welcomed worshippers in person, within guidelines, since July.

“We have a fairly large sanctuary, so it was pretty easy for people to spread out,” senior pastor Mark Walker said.

The Nazarene Church’s members run the gamut, Walker said, from those who believe the coronavirus is a hoax to those who hardly leave the house. But the approach the church has taken is that you don’t have to agree with the guidelines, you just have to follow them.

Its mission is centered on love, which includes being “willing to give up some things for the sake of others, especially for the sake of vulnerable people,” Walker said.

Walker said his biggest concern isn’t space – which is abundant in the church – but people’s comfort. It’s a feeling he understands, recalling watching a show on Netflix and reflexively wondering why the characters weren’t wearing masks.

“When we get to a time when masks are not required anymore, some people are going to have a hard time with that,” Walker said.

Several religious institutions told The Spokesman-Review that no matter what the future holds, it’s likely they’ll continue to broadcast services online. They’ve already invested in the equipment necessary to record, and it’s a boon to those who are homebound or would prefer to stay home.

Shadle Park Presbyterian Church has been open for about the past month, but it expects to stream its services online indefinitely. It can have up to 100 people inside under state guidelines, but hasn’t approached that capacity.

“We’ll probably continue to Zoom because there’s a lot of people who are homebound who can’t come, so this has been really good in that way,” said Eileen Wilmot, the northwest Spokane church’s longtime office manager.

Hosting a livestream has become second nature for some.

St. David’s invested early in the pandemic in an upgraded microphone system and a Mevo camera. Meinecke speaks to the audience at home, but a handful of real people are always in the room, albeit socially distanced and masked.

“I actually do have a smattering of people to look at and I haven’t used stuffed animals or cardboard cutouts,” Meinecke joked.

St. Mark’s also plans to maintain an online presence. Through the pandemic, it’s filmed on various days and edited with music and other accompaniments. Staying active online should help more people participate in church services.

“You think of the summer, too, when all of Spokane goes up to the lake,” Nelson said.

The church’s online viewership has actually been robust, giving has continued to sustain operations and it has even received new members. It held a class for new members late last year and will hold another this spring.

“We found that there are people who would worship online who are not members of St. Mark’s,” Nelson said.

“People have learned how much they love the church community and how much the Gospel message means for them in a difficult time,” Nelson said.

Walker described how two members of The Church of the Nazarene, both in their 90s, wrote him an email to thank him for the online service. In person, a few rows back, they would have trouble hearing.

Churches have struggled with how to react to technology for centuries, Walker added. With the advent of the printing press, some religious leaders worried that access to the printed Bible would deter participation in in-person worship.

“We would think that’s ludicrous today,” Walker said, so when it comes to streaming services online, “it’s not something to overly stress about, it’s given us opportunities to reach people.”

While some people might prefer the ease of worshipping from home, Wilmot said many aren’t willing to forfeit the benefits of in-person attendance.

“There is great value in just being together, and even though we’re physically distanced and mask up, we’re still seeing faces – or eyes, in this case – that we know and recognize,” Wilmot said.

COVID-19 arrived at a time when many places of worship already were struggling, participation in religious activities long on the decline in the United States.

According to a poll released by Gallup last week, fewer than half of Americans say they belong to a church, the first time the country has failed to meet that threshold since polling began in the 1930s.

Religious participation has steadily dropped in United States for about the past 20 years, according to the Gallup data.

The Pew Research Center also tracks religious data, and it found that the number of American adults who identify as religiously unaffiliated has grown from 17% in 2009 to 26% in 2019.

Still, all hope is not lost for religious institutions.

Pew reported in January that nearly 30% of adults said their personal religious faith has grown stronger during the pandemic.

As easy as it is to get caught up in the numbers, Walker cautioned against placing the church’s entire value on its Sunday morning attendance.

“When we gather on Sundays, it should influence the way I treat someone at work I’m having a disagreement with. It should be formative, generative,” Walker said. “It’s an important part of who we are, but it’s not all of who we are.”