MIAMI — The state of Florida has filed a lawsuit against the federal government to demand cruise ships be allowed to start sailing immediately, Gov. Ron DeSantis announced Thursday.

DeSantis said the no-sail order is outdated and hurts the state as the industry generates billions for the economy and employs tens of thousands of Floridians.

“We don’t believe the federal government has the right to mothball a major industry for over a year based on very little evidence and very little data,” the Republican governor said at a news conference at the Port of Miami. 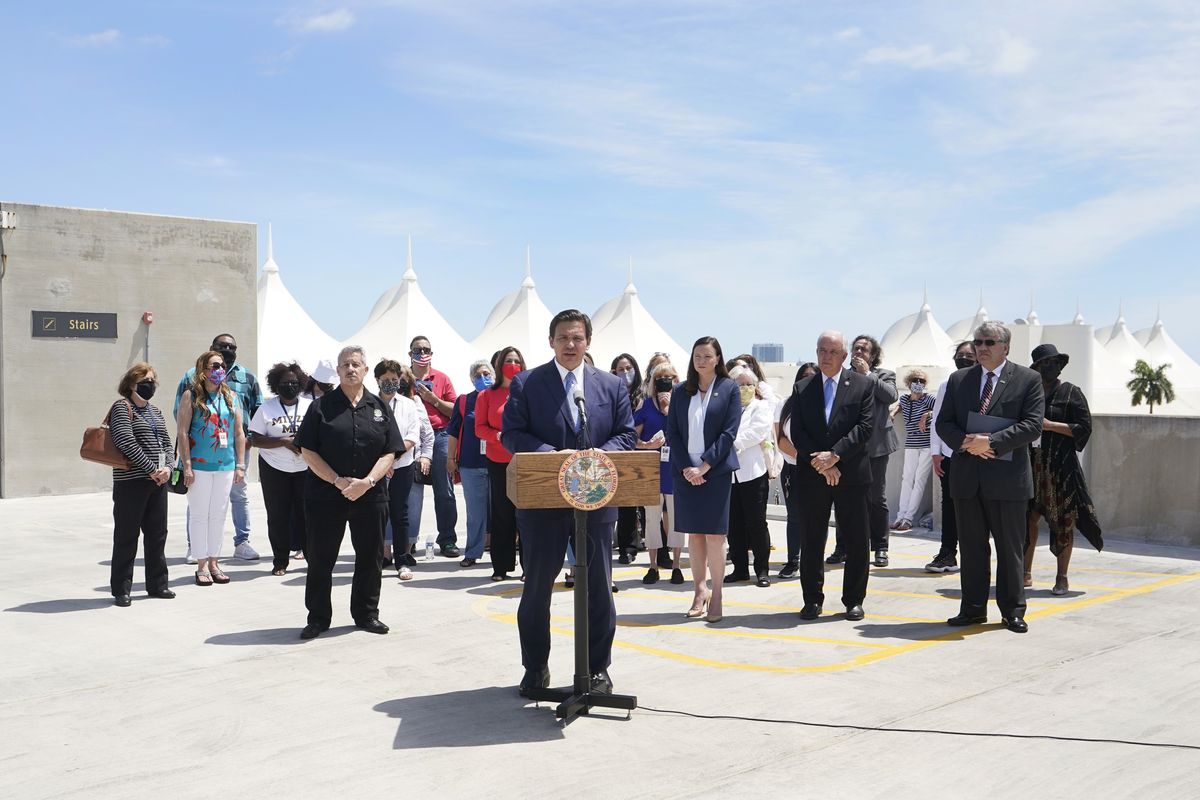 Florida Gov. Ron DeSantis, center, speaks during a news conference surrounded by cruise workers, Thursday, April 8, 2021, at PortMiami in Miami. DeSantis announced a lawsuit against the federal government and the CDC demanding that cruise ships be allowed to sail. (Wilfredo Lee/Associated Press)

The Centers for Disease Control and Prevention issued new guidelines last week for companies on how to respond in the event of COVID-19 cases but has so far not lifted its no-sail order.

The lawsuit says the new guidance doesn’t take into consideration another CDC statement made that fully vaccinated people can now travel at low risk to themselves. It also says the new rules increase the frequency of reports of COVID-19-like illnesses and require agreements be made between cruise companies and all U.S. ports and local health authorities where ships have to dock.

The CDC shut down sailing last March when several coronavirus outbreaks were tied to ships worldwide, prompting ports to reject docking plans and leaving some passengers and crew members to navigate for an extended time.

Florida is the nation’s cruise capital with three of the world’s busiest ports: Miami, Port Canaveral near Kennedy Space Center, and Port Everglades near Fort Lauderdale. The lawsuit says industry generates billions for the state’s economy as millions of people typically cruise from one of Florida’s ports each year.

DeSantis has maintained the ban disproportionally impacts Florida and has said that cruising has resumed in much of the world, forcing Americans to fly to other ports in the nearby Bahamas. Industry leaders say there have been no new outbreaks tied to their ships.

“People are going to cruise one way or another. The question is are we going to do it out of Florida, which is the number one place to do it in the world, or are they going to be doing it out of the Bahamas or other locations?” DeSantis said.

During Thursday’s press briefing, White House press secretary Jen Psaki said she did not have a direct response to the lawsuit, but denied accusations the CDC uses flawed data to ban sailing.

“I will just reiterate that the CDC guidance is based on data and health and medical guidelines, hence that’s why they put it out and why they are regularly updated,” she said.

Michael Winkleman, a maritime lawyer, said he does not expect such a lawsuit to succeed in court. But DeSantis’ advocating for the cruise industry in a public way could change the public perception on the matter, and pressure the federal government to resume traveling, Winkleman says.

“The reason why this would be a futile is CDC officials have wide discretion in how they do their federally mandated job,” he said. “From a big-picture perspective, I don’t think there is any reason why cruises cannot sail safely.”