Community drew Diana Totten to Malden – the way everyone waves to each other as they drive down the street; how kids can safely ride their bikes around town; and the willingness of others to offer a helping hand.

“They’re our neighbors and everything, but they’re more like family,” Totten said. “Everybody’s so close, like one big circle.”

And that was before last summer, when wildfire roared through the small town southwest of Spokane. Totten has now been gifted a brand new home and has the chance to return such kindness to help her neighbors in their time of need.

Totten moved to Malden 10 years ago from Spokane to help her mother, Gisle Merriman, after she had a heart attack and quadruple bypass surgery.

At the time, Totten had four children and decided to make Malden the family’s permanent home. She bought a house in the center of town that was built in 1909 and had survived the fire of 1910.

“We liked it out here; what a cute little town,” Totten said of the decision to stay in Malden. 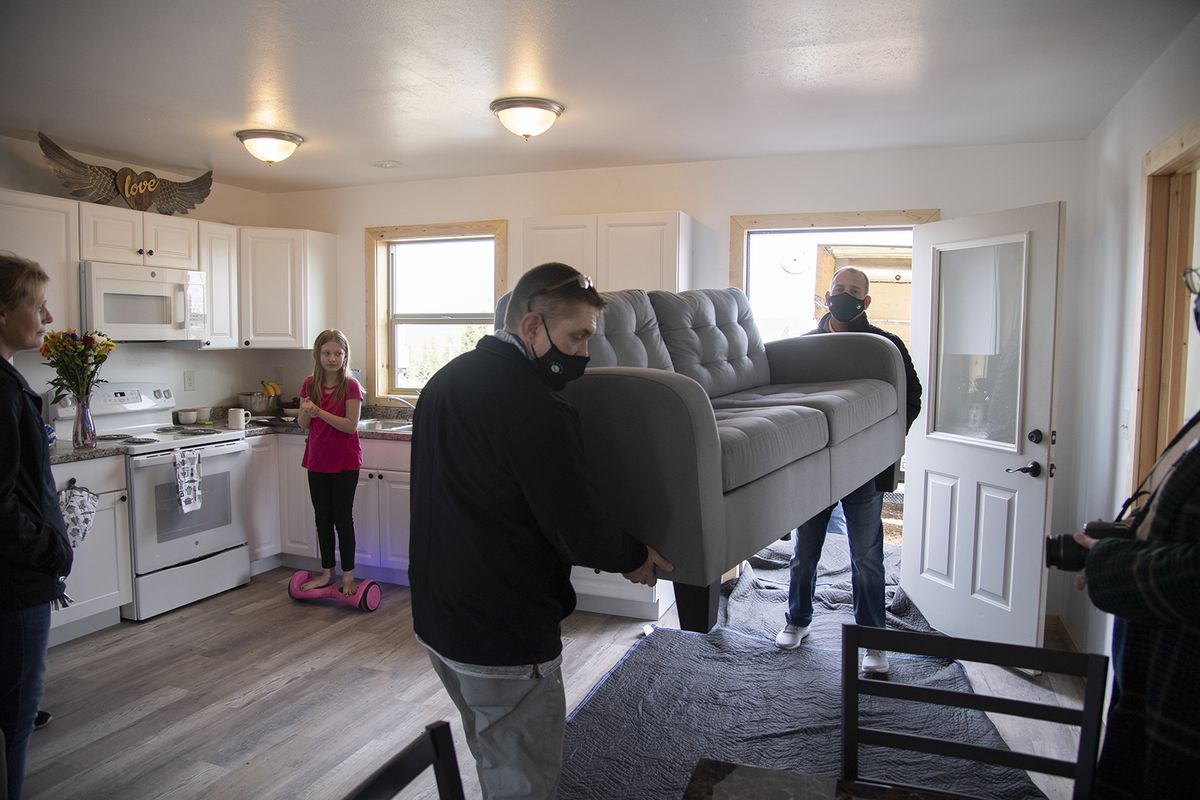 Diana Totten, far left, and her daughter Briaunna Totten,12, watch as furniture is hauled into the new home built for them in Malden, Washington Friday, Mar. 26, 2021. The new home was just completed my missionaries of an Anabaptist community from Montana. Carrying the new couch is Tennessee Cochran, center, and Jason McSteen, owner of furniture store 16 Cents, 3 Shoes & 5 Socks. (Jesse Tinsley/The Spokesman-Review)

An avid gardener, Totten had thousands of plants in her garden, but the house was old and needed a lot of work, including a new roof and gutters, Totten said. With her three oldest boys moved out, Totten and her 12-year-old daughter Briaunna were working on fixing up the home in the summer of 2020.

Totten was unable to afford insurance until the roof was replaced, something she had hoped to do herself.

“I was working on it and I was not fast enough,” Totten said.

On Labor Day weekend, Totten and her daughter returned home late from a trip and planned to sleep in.

Then midday, the wind woke Totten up, she said. She checked to see what was going on and saw there was a fire near Rosalia. But fires on the Palouse are common, so Totten said she didn’t worry.

That quickly changed when Totten realized the wind was blowing the opposite direction to what is normal that time of year, she said.

Not long after, Totten’s neighbor told them it was time to evacuate.

“I thought we’d be back. We’ve had fires out here before,” Totten said. “By the time we got to Spokane, the house was gone.”

About 80% of Malden and nearby Pine City residents lost their homes to fire that day. About 40% were uninsured. Townspeople quickly formed the Pine Creek Community Long Term Recovery group that has worked with nonprofits and the federal and state governments to start the rebuilding process.

For Totten, the next few weeks were a whirlwind of unknowns, especially without insurance. She stayed at her sister’s house in Spokane and began planning how she was going to clean up her own property.

Not only had Totten’s house burned down, but so had three sheds on her parents’ property. Her parents had recently sold their home and moved to be closer to Totten’s brother but had kept part of their property with the sheds.

At first Totten attempted to clean up the property herself, but she became ill and had to be treated for smoke inhalation. Then came word that Washington state would help pay for the cleanup.

With all of this happening, Totten quit her job building windows to focus on rebuilding her own. Then came a call from Hank Cramer with the state’s Emergency Management agency asking Totten to come meet with a group called Western Anabaptist Mission Services.

The group, based in St. Ignatius, Montana, works with Christian Aid Ministries to help in the aftermath of natural disasters. The Anabaptist group helps build homes for those in need and shares some of the administrative burden with the Christian aid group.

“The Amish people help us with the cleanup and then we help them with the rebuilding,” said Floyd Yoder with Christian Aid Ministries.

Totten was hesitant to let the group build her a new home, saying others deserved it more, said longtime friend Terri Meade.

But Totten was chosen to receive a new donated home for herself and her daughter, along with fellow Malden resident, Lori Dickinson.

For most of her life, Totten has been a helper, so it’s not natural for her to be the one who needs help, Meade said.

“She has the heart of a giver,” Meade said.

Totten now plans to use her new home to help her neighbors as they rebuild.

Many Malden and Pine City residents are living in RVs on their properties where houses once stood. It poses challenges for the basics, such as laundry and hot showers.

“When it’s done, I’m gonna get all my stuff settled in, and I plan on helping the rest of the town,” Totten said while construction was underway. “I’ll have a washer and dryer. They can come up and do laundry if they need to. My door’s open.”

The 1,000-square-foot home was built quickly. Crews from the anabaptist group rotated in and out weekly. On March 24, Totten got world they had their occupancy permit. Filled with excitement, she and Briaunna spent their first night in the home the next day.

By the next morning, Totten had curtains hung up in all the windows and dishes in the cabinets.

“I love it,” Totten said. “I’ve never had nothing new before.”

Briaunna came out of her bedroom that day wearing a bright pink top with her hair up in a towel. She had already made herself at home. In her room, there was a large, gray fuzzy bean bag chair and a side table with a sign that reads “Dogs welcome, people tolerated.”

Just like her daughter, Totten was quick to add personal touches to the new house, starting in the garden. She had already planted a Japanese maple tree, weeping cherry trees and a peach tree before moving in. Now she plans to build her garden, starting with a raised rose bed to honor a brother who died. And there will be vegetables to give to neighbors.

By mid-morning, Meade arrived at the new house with a bouquet of flowers and a box truck behind her. Meade, the general manager of 16 Cents, 3 Shoes, & 5 Socks, had just finished dropping off furniture to fellow home recipient Dickinson.

“Someone is already making the feeling of home here,” McSteen said as he took off his shoes and gestured to the rocking chair in the corner of Totten’s living room.

McSteen visited Malden earlier this month and met with Mayor Dan Harwood. At the time, the food bank’s shelves were bare and McSteen felt the urge to help.

“Pull into the town and you see they need help,” he said.

So McSteen began taking donations at each of his four stores in Spokane. By Friday, his team had to use two vehicles to haul the food, clothes and toiletries to the food bank. McSteen said he plans to continue helping Malden and Pine City residents however he can.

“I think we’re kind of adopting Malden,” he said.

After hauling Totten’s new dining room table and couch set into the house, McSteen and Meade left, along with their crew.

A few minutes later, there was a knock at the door.

It was 90-year-old Jim Jacobs, who lives on his burned-out property in an RV within sight of the new house.

Totten immediately welcomed him inside and offered a cup of coffee.

Jacobs began to tell Totten about what he got at the town’s food bank last week, before she told him to bring the ingredients and his laundry up to her house later this week so she could make him dinner.

For Totten, being able to help her neighbors feels like a bit of repayment for the blessing of a new home. She plans to paint the house light yellow with dark trim and has already begun setting up insurance to make sure she’s covered in the event of another disaster.

Gesturing toward her new home, Totten said it’s “all a fresh start.” .